Thinking Through the Riots 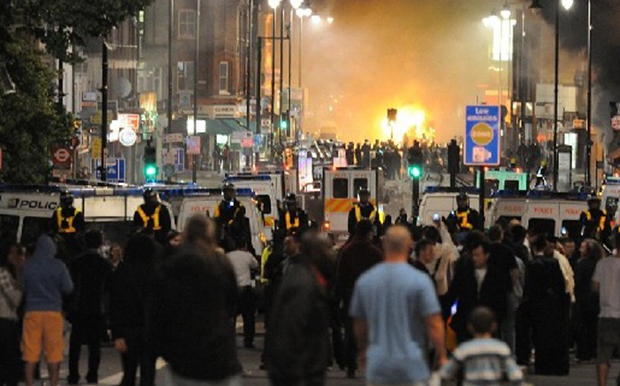 All riots have ‘preconditions’ and ‘precipitants’ wrote Nick Jewson two decades ago and it is an attempt to try and discover these that is needed, as well as the need to curb the excesses witnessed on the streets of London these past few days. The latter is the immediate concern of the Police but the former ought to be concerning politicians, journalists and academics alike. And while the tactic to handle the riots sensitively is the tightrope the Police must walk, the need to frame the events of this weekend in a comprehensive and judicious manner is the effort that commentators must exert.

Unfortunately the images of ‘hoodlums’ looting shops has a seductive appeal. The riots can easily be explained – and thereby controlled – as a form of hooliganism that is outside of politics and concerns merely an innate criminality that sees opportunity and acts. The pictures of looters that are running endlessly across the global media have a deep resonance for many. They touch a bourgeois sense of the sanctity of private property and an indignation at what we see as an illicit commercialism – stealing those commodities that are sold to us as symbols of status/reward: we earn money and therefore get to spend it on goods.

What is more, their ostensible visibility and spectacle renders further invisible other forms of looting within the narrative emerging from various media and other official commentators. To cast the riots as merely a result of criminality forecloses the possibility of asking whether such behaviour amongst the ‘non-professional classes’ is merely a corollary to that which happens amongst ‘professional classes’. Is there a categorical difference, or merely one of degrees, between the impulses that animate bankers and those who fiddle with business expenses and the people looting on the streets?

While the looting is – without any exceptions that I can think of – a case of self interest and illicit gain (and I have no trouble admitting this), I am unsure to what extent the looting can be seen as the reason for the riots rather than the inevitable result of an Urban environment where rioting ensues. Indeed to think of the riots merely in terms of looting is precisely the reductionism that needs to be avoided and to this end I want to contemplate other ways of deepening an analysis of the riots.

The Media as an epistemic means has over the years, it seems to me, built up a kind of epistemic deficit in so far as under-reporting or investigating the sentiments brewing in the Black communities of Britain. This has happened partly because Muslims have become the ‘new’ Blacks in Media and political discourse and have been disproportionately represented in news and documentaries. What is more, calls of a death of Multiculturalism are premised on the lack of integration which is framed as a matter of culture, values and identity. But in the riots we have seen recently we have a case of people who do not easily fit the death of Multiculturalism paradigm if presented purely in this way, although their actions, the same as what occurred in Oldham, ought to raise the same issue. Yet it hasn’t; why not? Because the ‘failures of Multiculturalism’ paradigm uses Muslims and culture as the underlying cause of altercation and not economic reasons that are at play here and were at play in Oldham but were easily ignored then because of the rioters’ Religious and cultural background.

Economic disenfranchisement, therefore, is not far from the current chaos. One has to merely bring today into relation with the 1980s when you had a conservative government and cuts in the public sector, unemployment and a sense of inequality to see that. Indeed, to ask how economic realities of the present are restructuring social relations that resemble the past is one line of enquiry that can arise from the riots and be more valuable for the insights it affords than one that entertains only notions of criminality and thuggery. In the same vein, we should also ask: what is the nature, shape and experience of a working class subjectivity and how is it represented in cultural/political discourse as well as in the British mediascape? Such a way of thinking through the riots need not interfere with the effort to stop them, but may in fact tell us more about our society so that they can be stopped before they start.