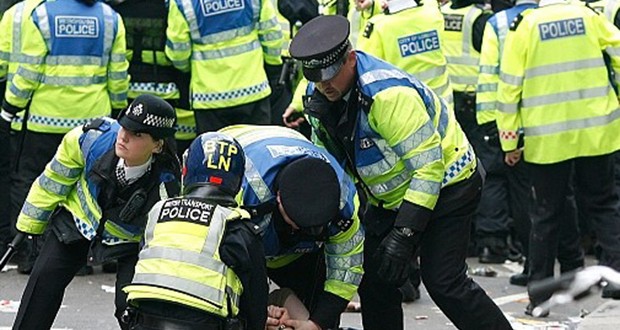 The past few days has seen riots take place, not only in London, but across many major British cities. Although the source of the mayhem was actually a peaceful demonstration in the London borough of Tottenham, what followed was not a united front against alleged police brutality and institutional racism but mass looting and anarchy.

Such actions are indeed an outrage and are intolerable in a civilized society, yet the ferocity with which rioters have been destroying property and attacking fellow citizens leaves us asking many questions about the condition of the society we live in.
Prior to discussing the riots let us clarify what divine revelation tells us. Allah says,

“And eat up not one another’s property unjustly (in any illegal ways such as theft, robbery, and deception), nor give bribery to the rulers (or judges) that you may knowingly eat up a part of the property of others immorally.”

“There should be neither harm nor the reciprocating of harm.”

As the verse and hadith indicate, it is absolutely prohibited to participate in looting, stealing, or damaging the belongings or property of others. The crime is so heinous that Allah commands, “Cut off the hand of the thief, male or female.” In another verse Allah speaks about those who spread anarchy and are careless of who they kill or terrorise. Allah says,

“Because of that We ordained for the Children of Israel that if anyone killed a person not in retaliation of murder, or to spread mischief in the land – it would be as if he killed all mankind, and if anyone saved a life, it would be as if he saved the life of all mankind. And indeed, there came to them Our Messengers with clear proofs, evidences, and signs, even then after that many of them continued to exceed the limits (e.g. by doing oppression unjustly and exceeding beyond the limits set by Allah by committing the major sins) in the land! The recompense of those who wage war against Allah and His Messenger and do mischief in the land is only that they shall be killed or crucified or their hands and their feet be cut off on the opposite sides, or be exiled from the land. That is their disgrace in this world, and a great torment is theirs in the Hereafter.”

Having clarified the severity with which Allah refers to such crimes and the level of evil involved whereby one should not trivialise current events assuming that the perpetrators and merely ‘kids’, I strongly call upon people to avoid purchasing any electrical equipment or clothes that come from unknown sources as there is a major likelihood that much of the looted items will be sold on the streets. Please note that I am not in any way advocating that one should act in a vigilante fashion and attempt to carry out punishments – such a role is exclusively reserved for the Government. The verses are quoted in order to convey the severity of such actions and to rebuff any attempt to trivialise those who cause anarchy.
Although we support peaceful demonstrations against problematic government policies, we advise people to keep away from violent riots that cause civil unrest and urge them to take up means of change that do not include anarchy. Furthermore, parents must take more responsibility applying strict rules against their children in reference to leaving the home. It is apparent that during this summer holiday there have been many young people loitering in the streets with nothing to do and so their attentions have turned to criminal behaviour.
Despite our condemning the riots and subsequent looting in the strongest terms possible, the riots uncover a reality that Government has tried to cover up for long time. I don’t believe that we can pinpoint one single reason for the riots. Material deprivation, although the main focus of many commentators, is not the only reason. A number of factors have contributed to building a societal structure that is as volatile as fuel and ready to explode with even the smallest spark.
Amongst the reasons for such an outbreak of violence and mayhem is the long standing racism that has been inherent within institutions that are meant to maintain peace and justice among all citizens. The impunity with which the police act towards minorities has been worrying for quite some time and government policies such as the arbitrary ‘stop and search’ powers help to demonise minority groups. Furthermore, the recent government cuts include the closing down of libraries as well as the allowance for universities to raise tuitions fees which hinders poorer students from applying to decent universities thus creating a sense of disillusionment amongst the working class – all of these were shrugged off by the Conservative government despite the warnings of various specialists and academics. In a previous article that discussed the current government’s cuts I asserted that the Conservative government is calculatingly creating a class system whereby they keep education and good jobs for the privileged.
Another phenomenon that is undoubtedly a source of the current problems is the government’s response to gang culture, which has been minimal at best, all in a bid to uphold supposed freedom, but instead diminishing the importance of responsibility and promoting individualism. And whilst the current Prime Minister had been courting media moguls such as Rupert Murdoch at 10 Downing Street, media companies such as those of Murdoch’s promote short term plans of making ‘easy money’ and dreams of a celebrity lifestyle to the youth. It is in the form of music, pop culture, and a hedonistic lifestyle that these generations of young people are reared. But instead of actually providing these young people with what actually is best for them, the system destroys the family system through stripping the parents of their authority.
Needless to say, Islam has a solution for all these problems. Within the society we live in, we consistently fail to address the big issues and instead of benefiting from Islamic teachings that not only encourage uprightness and a sense of compassion but also provides the groundwork for a cohesive multicultural society, politicians would rather pander to supporters of the EDL by focusing on the actions of a few using offensive terms such as ‘backward’ and ‘fanatical’ to describe Muslims and their faith.
Our society must be forced to think about its exposed fragility. How it is that Britain’s social structure is this vulnerable and how can we actually strengthen it? Whilst the government has been busy scaring citizens with the threat of terrorism so as to legitimise western hegemony in foreign lands and procure lucrative contracts that make the rich even more affluent, it is clearly evident that they have neglected, and perhaps intentionally, the very real problems that exist within our society.
What we as British citizens need is a comprehensive system that constructs for us a social and ethical consciousness that is connected to divine wisdom, essentially, the will Allah, Lord and Creator of the universe. We must reinstate family values based on divine instructions articulated by God the most Wise and Just. Similarly, we have been instructed about the importance of charity in that there needs to be a better distribution of wealth in society where the ‘little people’ and not only bankers benefit. Allah says concerning the principle of circulating wealth,

“…it is for Allah, His Messenger and his family, the orphans, the poor and the wayfarer, in order that it may not become a fortune circulated amongst the rich.”

Furthermore, the racist outlook long held within the public services must be rooted out so that people from all backgrounds are treated with a sense of dignity. The justice system needs to hold criminals to account with the rights of society in mind, not merely the rights of the individual which has been used for quite some time in allowing criminals leniency and effectively legitimising their campaign of terror on fellow citizens. Indeed, the justice system must re-evaluate the entire basis of criminal law and seek to understand what is actually best for society and not merely the image of politicians who refuse to face core societal problems only to leave British citizens to face the consequences.
We call upon Allah the Lord Almighty to aid the oppressed and the victims of these criminals, to restore order, peace and security, to guide us to that which is better for us in this life and the hereafter, and to rid us of the evil people (and their actions) that have caused widespread fear and panic.
Notes:
Sources:www.islam21c.com

2011-08-11
Shaykh (Dr) Haitham Al-Haddad
Previous: Thinking Through the Riots
Next: This is Terror