Reflection on the death of Gaddafi 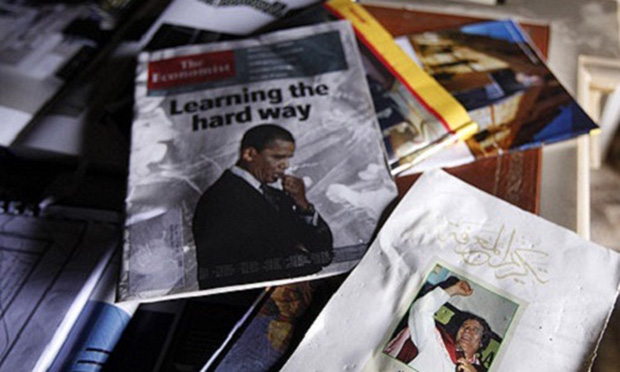 If you YouTube Gaddafi’s name and watch some of his old videos you are left with the impression that he spoke as if he was never going to die. It is amazing how human beings become arrogant, headless and tyrannical. This all happens when a person forgets that he is subject to the Lord above him. In the Qur’an Allah says,

“Nay! Verily, man does transgress all bounds (in disbelief and evil deed) because he considers himself self-sufficient”.[1]

“Pharaoh said: “O chiefs! I know not that you have a god other than me, so kindle for me a fire, O Haman, to bake bricks out of clay, and set up for me a lofty tower in order that I may look at the God of Moses; verily, I think that he (Moses) is one of the liars. And he and his hosts were arrogant in the land, without right, and they thought that they would never return to us”.[2]

Many human beings are ignorant and stupid. Many of us have now seen the end of the “king of all kings”. Where is Gaddafi now? Who can help him? Where are his children, his troops, his wealth, and his supporters? Now he faces the reality of what he used to do. Over 40 years of tyranny and arrogance have vanished in a few seconds. It was a matter of a few weeks ago when he called his people rats and he, by the will of Allah, vanished hidden in a sewage pipe like a rat.

His life and death is a lesson not only for other leaders but for all of us since many of us have elements of arrogance and pride within our hearts. Some of us deal in the same manner with our subjects. Others reject any advice as well as signs they see. Allah describes the effect of arrogance on people saying,

Many western countries who supported Gaddafi either openly or secretly on different occasions were the first to abandon him when he was falling. Should not we reflect on this and stop seeking shelter from those who change their colours based on their own interests and have no respect for any value?

The Libyans have confirmed that our Muslim ummah is still alive and is waking up to take its position. Allah says,

“You are the best of peoples ever raised up for mankind; you enjoin Al-Maruf and forbid Al-Munkar and you believe in Allah. And had the people of the Scripture (Jews and Christians) believed, it would have been better for them; among them are some who have faith, but most of them are Al-Fasiqun (disobedient to Allah – and rebellious against Allah’s Command).”[4]

The Libyans have proven that will and determination can turn the impossible into what is possible. Had you asked anyone a few years ago regarding the removal of Gaddafi nobody would have imagined it possible. However, by the will of Allah it was done. Muslims should start changing their views regarding their position and their future as they have managed to remove the three most evil tyrants of the Middle East and will shortly get rid of the worst of them all, the Syrian president. The West should change the way it views Islam and Muslims and needs to realise that the Islamic-West relationship must be re-defined based on new parameters.