#STAND4UYGHURS
Home / Analysis / Gaza: Exposing the Hypocrisy of the World 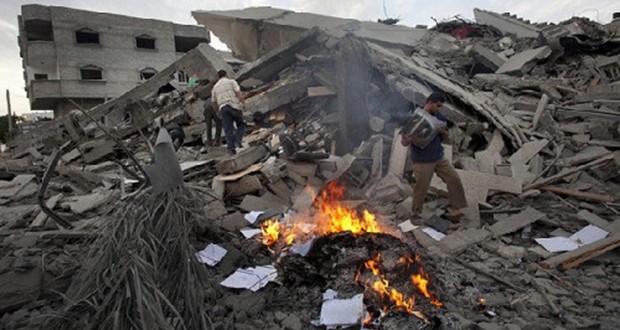 Gaza: Exposing the Hypocrisy of the World

Gaza. Four years on from Operation Cast Lead, both the Palestinians and Israelis are celebrating once more, each declaring victory over the other, following a week long conflict in which three Israelis were killed and over 100 Palestinians, and immense destruction and devastation inflicted upon the infrastructure in Gaza.  The Muslim world is jubilant at what is being viewed as a victory for resistance, defiance and indomitable spirit.

While there is no doubt that the recent conflict terminated against the wishes of Israel and secured concessions, on paper at least, that years of negotiations, conferences and the ‘peace process’ had failed to obtain, once the celebrations are over and the events are viewed through a less emotional lens, there is only one word that will dominate the thought-process; hypocrisy.

Firstly, there is the blatant and arrogant hypocrisy of the Zionists who claim that their relentless day and night bombardment from the air and shelling from the sea, was in self-defence because Hamas had failed to stop rockets being fired into southern Israel. At the outset, these events must never be viewed in the abstract and must be contextualised as a tiny part of a much larger genocidal economic blockade that has been imposed on Gaza for several years, under which 1.7 million people are enclosed in an open-air prison 23 miles long and only 3 miles wide. Both Israel and Egypt are directly responsible for the continuation of this blockade as a result of which basic food items, medicines and construction material are prohibited from entering Gaza. Any human being living in such conditions will at some point strike back.

But to look at these series of events in and of themselves, it is clear that it was Israel who initially broke the ceasefire. On 4th November, Israeli forces shot dead an unarmed, mentally unfit man walking near an Israeli-imposed “buffer” area inside the occupied Gaza Strip. On 5th November, Israel reported that one rocket had been fired into Israel. On 8th November, Israeli occupation forces made an incursion into the Gaza Strip near al-Qarara villlage northeast of Khan Yunis, opening fire indiscriminately, fatally injuring a 13 year old child; Ahmed Younis Khader Abu Daqqa, who had been playing football with his friends in front of his family’s house, located nearly 1,500 meters away from the area where the IOF were present. The following day, two rockets were fired into Israel. On 10th November, Palestinian resistance fighters attacked an Israeli army jeep near the boundary in Gaza, injuring 4 Israeli soldiers. Following this, Israel attacked civilian neighbourhoods in Gaza. In the ensuing 72 hour period, Israeli forces killed 7 Palestinians. According to Palestinian Centre for Human Rights, five of the dead were civilians, including 3 children. Fifty-two others, including 6 women and 12 children were wounded. Unsurprisingly, approximately 28 more rockets were fired into Israel in retaliation.

On 13th November, Egyptian intelligence officials successfully managed to broker a truce. Yet, the very next day, Israel violated the truce by extra judicially assassinating the Hamas military leader Ahmad Al-Jabari. It was this attack that escalated the conflict to the level of bloodshed the world witnessed over the next seven days.

For the Israelis to cry ‘self-defence’ was as hypocritical as their claim that their citizens were under siege.

Secondly, there is the hypocrisy of the Western powers, led by the US and UK. Unwavering in their support for Israel, they utterly condemned the rocket attacks into Israel squaring the blame solely on Hamas while expressing their sympathy to Israel’s right to live in peace and security. Somewhere along the line, they forgot that Palestinians too had a right to live. Those who naively believed that Obama could deal more justly in the Middle East in some desire to leave a legacy in his final term, are probably now feeling that the lesser of two evils is still evil. Despite audacious rhetoric from Israeli political and religious leaders amounting to incitement for a genocide, they attracted no condemnation from any Western leader. Knesset member Michael Ben Ari published a message to Israeli soldiers on his Facebook page that “There are no innocents in Gaza, don’t let any diplomats who want to look good in the world endanger your lives – mow them down!”  And “stroke over it in red”.  Interior Minister Eli Yishai said that the goal of Operation Pillar of Defense was “to send Gaza back to the Middle Ages”. Journalist, Gilad Sharon, the son of former Prime Minister Ariel Sharon, in an editorial in the Jerusalem Post called for Gaza to be flattened like the US flattened the Japanese city of Hiroshima in 1945 with an atomic bomb, “We need to flatten all of Gaza. The American’s didn’t stop with Hiroshima – the Japanese weren’t surrendering fast enough – so they hit Nagasaki too. There should be no electricity in Gaza, no gasoline or moving vehicles, nothing. Then they’d really call for a ceasefire.” Israel Katz, Israel’s transport minister, called “for Gaza to be bombed so hard, the population has to flee into Egypt.” While another minister Avi Dichter urged the IDF to “reformat” Gaza – to wipe it clean with bombs. Even religious leaders joined the fray, with a prominent Israeli rabbi, Yaakov Yosef, the son of former chief rabbi, Ovadia Yosef, in a sermon at the Cave of the Patriarchs in Hebron blessing IDF soldiers while urging them, “to learn from the Syrians how to slaughter the enemy.”

While the entire Western world continues to demonise and isolate any individual, group or nation which questions the two state solution or the future existence of the state of Israel, it not only remained silent in the face of such genocidal rhetoric with respect to Gaza, but actively supported Israel’s actions. Ahmedinijad continues to be derided as a maniac for discussing wiping Israel off the map of the world and the Hamas’ founding charter, which calls for the obliteration of Israel, is repeatedly used to justify boycotting it. But when it came to such rhetoric backed up by daily bombings, the response of the US was for both houses of parliament to pass a resolution expressing, “vigorous support and unwavering commitment to the welfare, security and survival of the State of Israel as a Jewish and democratic state with secure borders, and recognizing and strongly supporting its right to act in self-defense to protect its citizens against acts of terrorism” And reserving all condemnation for Hamas.

Thirdly, was the hypocrisy of the Western media with BBC leading the way in providing misinformation to its viewers and listeners.  Without any historical or even current context, the focus was primarily on the rocket attacks into Israel, how Israelis were killed but on the other side, nothing about how Palestinians died during the bombing of Gaza. Routinely, Israelis were interviewed to provide a human face to the conflict, describing their fears and worries, their terror and anxiety, under siege from Hamas. Dead Palestinians were simply boring statistics. One after the other, Israeli spokespersons were introduced to repeat the mantra of Hamas rocket attacks and using the civilian population as human shields, but never challenged for their claims. When the 11 months old baby of a BBC journalist was killed in an Israeli strike, rather than becoming a headline story, it was relegated to a few lines in a greater story. Contrast this with the 24/7 coverage that was given when a BBC journalist was kidnapped by Palestinians in Gaza. Then again, journalists were routinely targeted in Gaza with the offices of Sky News and ITN also being struck by Israel but with little, if any, comment on the respective channels. Nobody dared to criticise Israel, even if it targeted journalists simply doing their job.

Fourthly, we observed thy hypocrisy of the Arab leaders. Content to finance and arm to the teeth rebels aiming to topple Gaddhafi in Libya and Assad in Syria, nations such as Qatar seemed unable or unwilling to so much as to verbally threaten Israel despite the Emir of Qatar having visited Gaza just weeks earlier pledging his full support to Hamas. The Saud family, who were happy to send its air force to bomb Bahraini protestors, could not send a single weapon to the besieged people of Gaza, instead only condemning Israeli action and pleading to the UN Security Council to take action. The behaviour of these royal stooges was further evidence that their intentions in supporting revolutionaries in Libya and Syria were far from sincere and only in line with what their American masters demanded of them.

What of the new leaders of the Arab Spring – Egypt, Libya, Tunisia? Although rhetorically they stood firm and sent delegations of high level politicians to Gaza in solidarity, beyond that, little happened. Despite Morsi’s efforts to secure a ceasefire and temporarily halt the shedding of Muslim blood, the Rafah crossing remains closed, as it did during the bombing. While sending armies may have been too much to ask of the leaders of these nascent post-revolution states, arming the Gazans would not have been. Unfortunately, it seems like that never happened. Once a bomb exploded in Tel Aviv, it was the US who was scrambling to secure a ceasefire which made it all the easier for Morsi to negotiate it.

Finally, there was the hypocrisy of some parts of the general Muslim population. Up in arms about the Israeli attacks on Gaza, these same Muslims routinely failed to condemn Assad’s atrocities on the civilian population in Syria. With between 30 and 40,000 people now slaughtered by Assad’s forces, they fluctuate from supporting the “heroic Assad” against the “US-Zionist funded terrorists” to justifying his actions as necessary to prevent a greater evil. In reality, they support Assad simply because the US opposes him. In doing this, they are as hypocritical as the Arab rulers who support the rebels simply because the US does. Neither position is based on principles but on political prejudices and biases. Assad is a brutal tyrant who, until recently, welcomed terror suspects renditioned to his country by the US for interrogation under torture. Assad’s forces beat his opponents to say “There is no god but Assad” (aoodhubillah) and the intelligence services are renowned for their insults to Islam and desecration of the Quran. Former prisoners testify about how guards would punish those who they caught praying in their cells. His regime is a secular godless Baathist one, as far away from Islam as the US and Israeli regimes. Yet, many of those who rallied for Gazans will loath to be seen supporting the Muslims of Syria whose blood is as innocent and as dear to Allah as that of the Gazans.

While the Gaza conflict of 2008 will be remembered for resistance, defiance and victory, the current conflict will be remembered for hypocrisy. This is not to take away from the amazing resilience and patience demonstrated by the Palestinians on the ground who were exemplary in their courage and who truly were victorious. However, unless the rest of the world learns from the hypocrisy of this conflict, we are destined to experience similar atrocities within the next few years.

Any article on the topic of hypocrisy would be incomplete without mentioning Mahmoud Abbas, the president of the Palestinian Authority. But in light of his increasing irrelevance, to discuss him further is pointless.

Notes:
Sources:www.islam21c.com
Islam21c requests all the readers of this article, and others, to share it on your facebook, twitter, and other platforms to further spread our efforts.
2012-12-05
Fahad Ansari
Previous: An Urgent Call to Support the Markazi Masjid in West Ham
Next: In defence of President Mursi