In defence of President Mursi 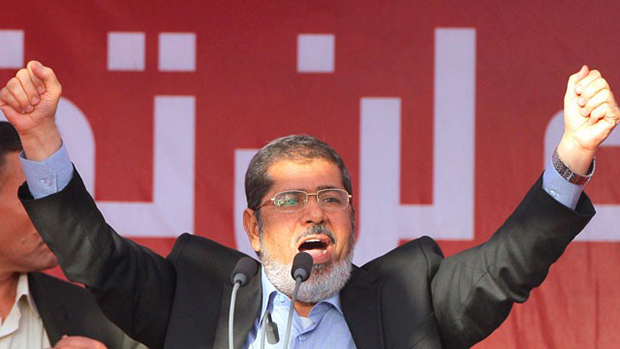 It has also reflected the primitive political culture of the so-called pro-democracy movements in the largest Arab country. This is really problematic because political maturity is essential for a successful democracy and stable government..
Indeed, how could these so-called pro-democracy groups call themselves “democrats” when they defiantly reject the will of the people which brought Mursi to power in Egypt? How could they call themselves “democrats” and at the same time refuse to allow the people to vote in a referendum over a draft constitution?
I saw huge crowds, mobilized by the opposition, screaming rabidly outside the presidential palace shouting obscenities at the president, even calling for his murder. In fact, some of the more rabid and convulsive representatives of the opposition had the shamelessness to call Mursi “Nazi, thug, traitor and Mursilini” (a play on the name of the Italian fascist dictator Mussolini).
This is more than committing an act of lewdness with truth, honesty and even language. How could any honest person under the sun call a democratically-elected president, who only came to power a few moths ago, “Nazi and Hitler?” Hitler, for those ignoramuses who don’t know history, destroyed Europe, and killed or caused the death of more than 50 million people. The Hitler’s regime committed indescribably nefarious war crimes against humanity. Therefore, throwing such epithets at the President, just because he hailed from an Islamist party, is really beyond the pale of simple human decency.
It is really sad that instead of engaging the President in a constructive dialogue, the Egyptian opposition is indulging in a puerile spasmodic discourse, infinitely corrupt analogies and name-calling, which really reflect the primitive political culture and malicious intent of this opposition. Yes, President Mursi, like all mortals, is not infallible. But he is a democratically elected leader of the country. This means that the losing political parties have no right to mobilize its rabbles to close in on Presidential palaces, hurl Molotov cocktails and even open fire on the president’s supporters. killing eight of them.
I am not saying that everyone that demonstrated or is demonstrating against Mursi is guilty. However, the opposition parties should have made sure that “fifth columnists” didn’t infiltrate their ranks. In addition, democracy is about empowering the people to choose their leaders and decide the way they are ruled. It is about enabling the masses to determine the nature of their constitution. It is about the separation of powers. And above all, it is about law and order.
Hence, vulgarity, vandalism, terrorism and sowing anarchy and chaos have nothing to do with democracy. The same thing applies to attacking and torching public and private buildings as well as the offices of other political parties. I dare accuse the opposition to Mursi of political adolescence, ill-will, incivility and excessive narcissism. They are politically adolescent because they are yet to bring themselves to accepting the rules of the democratic game, namely that the people, not the rabble, have the right to decide. They are uncivilized because it is a sign of disgraceful incivility to express political opposition to government by torching building and spreading chaos, let alone calling for the ousting of a president who was only elected a few months ago. And as to calling the president “Nazi, thug, and Hitler,” this is actually tantamount to inciting to murderer because words can kill. Moreover, the opposition has malicious intents because it has become amply clear that its real aims exceed by far the mere realization of a consensus over the draft constitution.
Their real aim is to overthrow the president by way of spreading turbulence and chaos which would force the people to call on the military to carry out a coup. Of course, they don’t have the moral courage to reveal their real intents, but their actions and behaviors, especially their rejection of all the calls for dialogue by the President and their dark embrace of Mubarak’s thugs and Baltagiya, expose their political and moral bankruptcy.
President Mursi has argued rather correctly that when there are sharp political divisions within any country, the ultimate solution lies in the ballot boxes. Unfortunately, the opposition, including pseudo-democrats who lived in the west for several decades, is not willing to accept this simple axiomatic logic. Instead, they want the president to budge to the vociferous raving and ranting of a small minority of their supporters who insist on ignoring the millions of other Egyptians who have given him their votes.
There is another important point which the opposition and the anti-Mursi media keep ignoring. It is the malicious intention of Mubarak’s constitutional court to dissolve the Upper Chamber of Parliament, the constitutional assembly, leading up to declaring the presidential elections null and void. It is this looming conspiracy that forced the President to speed up the voting on the draft constitution lest these Mubarak judges once again rape the will of the Egyptian people and decapitate the revolution by way of deception and judicial chicanery.
This is not a mere speculation. The very same court previously unlawfully and illegitimately annulled the democratically elected parliament for frivolous and vapid reasons in order to rob the Islamists of the resounding victory they had scored in the parliamentary elections. Indeed, one of the judges, Tahani Jabali, who is also a self-described hater of the Muslim Brotherhood, told the New York Times that the Constitutional Court had to annul the elections for political not legal or judicial reasons, namely to prevent the Islamists from controlling parliament and taking over the country. Jabali denied the report, but the New York Times journalist who interviewed her challenged her to prove him wrong.