According to Maajid Nawaz, Islam is the problem 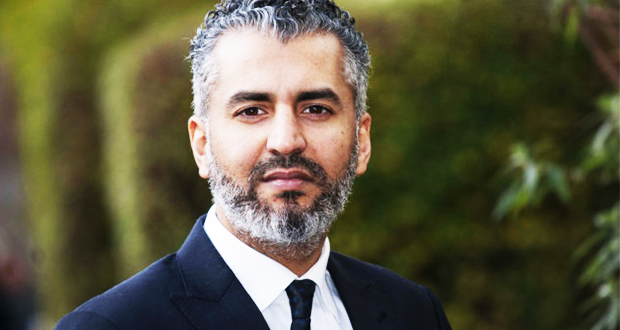 This pathological jihadist obsession with “the Jooz” in Europe isn’t born from lack of religiously justified sanction.
Here’s an example of a piece of scripture that is problematic:
Allah’s Apostle said, “The Hour will not be established until you fight with the Jews, and the stone behind which a Jew will be hiding will say. “O Muslim! There is a Jew hiding behind me, so kill him.”
Saying attributed to the Prophet Muhammad in the Sahih of al-Bukhari.
This, among many others, is a problematic religious text. With texts such as this, there exists juristic (أصولي) tools of reconciliation of scriptural conflict (جمع), examination of authenticity (تحقيق), prioritising moral aims (مقاصد) over legal means (وسائل), abrogation (نسخ), restriction (تقييد), specificity (تخصيص), blocking harm (سد الذرائع), classification as informative not prescriptive (أدلة خبرية ليست أدلة شرعية) and many other such juristic instruments.
Islamic clerics should not only accept openly the need to reform the way Islam is read today, and the way its tradition is seen to be finalised after the medieval period without further scrutiny – but they must also actively encourage such reform. The doors of re-interpretation (اجتهاد) must remain open.

Firstly, Maajid Nawaz is himself an extremist by the real meaning of the word, not an ex extremist. Formerly he claims he was an “Islamic extremist” due to him hearing about Muslim suffering in Bosnia during his time as a member of Hizb ut Tahrir where he became a “politicised Muslim”. Later Maajid Nawaz ended up in prison in Egypt during his compulsory study year there as a SOAS student. According to Maajid Nawaz it was at that time he realised that the kind of politicised Islam he was following was incorrect. Being well educated and articulate he was exactly what the Government wanted when they needed to be seen to be doing something after 7/7 but at that time they did not have a clue where to begin. So a lucrative career opportunity led Maajid Nawaz on a 180 degree turn around from an “Islamist” sitting in an Egyptian prison to where he is about to be sitting, in a synagogue discussing the topic of rising European anti-Semitic alongside vicious xenophobes Douglas Murray and Alan Mendoza at this upcoming panel discussion. [1]

Douglas Murray and Alan Mendoza are part of the Henry Jackson Society. I have written about Alan Mendoza previously when he gave a speech to AIPAC [2] Douglas Murray operates as an Islamophobe on two levels, one where he speaks as a representative of the Henry Jackson Society in which he tries to sound reasonable on television or radio whilst peddling fear of Islam and then more clandestinely as a contributor on the lesser known but much more Islamophobic and hawkish Gatestone Institute where his articles are more openly hostile about Islam and Muslims. [3]

No doubt there are more than a few Muslims who are enjoying very lucrative careers out of being “moderate Muslims” (and ex-Muslims) and have managed to persuade the Government that they know how to solve the problem of acts of violence committed by Muslims. Despite the fact that acts of violence by Muslims are invariably accompanied by their own videos stating that foreign policy is the basis for their anger, Nawaz and others like him are willing to deflect all attempts at getting to the real issues by promoting nonsense about Imams radicalising our youth in the masājid and the now fully-discredited conveyor belt to radicalisation theory. [4]

Prevent strategy began by encouraging Muslims to start up youth groups with government funding, which of course seemed a great idea as we are always looking for ways to engage the youth. Once set up the police might ask to attend one of the meetings and we heard of cases where the police would ask youths present what their opinions on Palestine were and get them really fired up about it. It was said that the youths who were loudest in their condemnation of Israeli policy would have their names noted by the police and perhaps come on their radar as potential terrorists. Very sneaky strategy and Muslims learned very quickly that Government funding does not come without strings attached. I would be very suspicious of any mosque or any group who accepts any funding from the Government no matter how attractive it may seem.

It is clear that fear of anti-Semitism has been in the news everyday recently, figures collected by the Community Services Trust [5] show an increase in hate crimes against Jews in the UK over the last year, particularly during the period where Israeli military forces were killing Palestinians in Gaza. However, despite the obvious proof that the Israeli occupation of Palestinian lands is cited regularly as one of the main drivers of Muslim acts of violence and statistics presented by the CST bear that out, nothing will persuade the Cameron government that something needs to be urgently done to end the dire situation that Palestinians face, because it would mean applying pressure on Israel and we plainly cannot do that, least of all with a general election coming up.

We are about to witness a whole new chapter in Maajid Nawaz’s career, as Government funds dried up for Quilliam Foundation a new source of income had to be found, on the Quilliam website it says you can email them for a copy of their accounts and that they are now funded by private donations. It appears that Maajid Nawaz is ready to walk away from Quilliam and Prevent and embark on a political career. As Liberal Democrat member standing for election in Hampstead and Kilburn Maajid Nawaz believes he is onto a vote winner when he talks about the root causes of anti-Semitism. There are probably many Muslims living in Kilburn but since founding Quilliam Foundation Maajid Nawaz knows he has zero credibility with Muslims so I doubt if he factors in the likelihood of support or votes from our community.

Politicians need money to campaign and it would be very interesting to see where Maajid Nawaz’s funds will come from. In America and the UK being pro-Israel has always brought in donations and in the last few months left before the general elections we have been seeing David Cameron and other members of the lobby group “Conservative Friends of Israel” giving speeches where they pledge their total commitment to Israel’s “security” and also their admiration of the contribution of Jews to British society. [6]

Could we be seeing the next level of the continuing demonisation of Muslims in Europe and the West? I feel sure it is exactly that which we are about to encounter as the latest initiative. Whilst it becomes increasingly more difficult to stem the tide of criticism against Israel and its policies in Palestine there is the start of a new drive by pro-Israel lobby groups to remove Israel and its genocidal actions from the discourse and to focus people on the religion of Islam itself. Already we have seen our Orthodox scholars being harassed and prevented from speaking at events particularly on university campuses in the UK where they go to carry the message that is written in our scripture. Our scripture is not different from Jewish scripture on the very issues that the Islamophobes call Muslims “extremists” over, yet only Muslims are demonised for following normative or Orthodox Islam.

Hunter Commission report of 1876 looking into the loyalty of Muslims under the Empire. In the report, WW Hunter says,

“The Musalmans of India are, and have been for many years, a source of chronic danger to the British Power in India. From some reason they hold aloof from our system, and the changes in which the more flexible Hindus have cheerfully acquiesced, are regarded by them as deep personal wrongs.”

“It is more than doubtful whether the Muhammadan Law should be taught as a regular study, incumbent on all. It certainly should not be made the chief object of instruction. For the Muhammadan Law means the Muhammadan religion – that religion, too, at a time when its followers looked upon the whole earth as their lawful prey, and before they had learned the duties of modern Musalman States in alliance with, or in subjugation to, a Christian Government. It would not be wise to do away altogether with the teachers of the Law, for its total abolition would imperil the popularity of the College with the present generation of Musalmans. […] In this way we should develop a rising generation of Muhammadans, no longer learned in their own narrow learning, nor imbued solely with the bitter doctrines of their medieval Law, but tinctured with the sober and genial knowledge of the West.”

There explained in a nutshell you have exactly what Maajid Nawaz is talking about in the text at the top of this article. The way to control Muslims is to deviate them from the Quran and Sunnah so clearly policy has not changed.

What Maajid Nawaz is saying is in reality very dangerous for Muslims as he is now indicating that not only are “politicised Muslims” problematic but ALL Muslims are inherently anti-Semitic due to Islam being a religion that promotes the hatred of Jews and he mischievously quotes the above hadith—devoid of its context and therefore meaning—as an example to back his false claims up. So just as individual Muslims or deviant groups justify acts of hate or violence against others by using a hadith or verse from the Quran selectively, Maajid Nawaz does the same. I really hope that some scholars might write and speak about the clear error of what Maajid Nawaz is doing. Maajid Nawaz is not a scholar of Islam.

Worryingly, just as Nawaz wants to imply that all Muslims are to blame for the rise in anti-Semitism due to our understanding of Islam, Israeli leader Netanyahu wants to implicate worldwide Jewry in Israeli actions by calling the State of Israel the “Jewish State”. By claiming Israel is the “Jewish State” he is giving the false idea that Israel represents all Jews. After the attack on the kosher supermarket in France and yesterday on a synagogue in Denmark Netanyahu is calling all Jews to move to Israel so they can be safe from European anti-Semitism. European anti-Semitism caused in no small part by the actions of the State of Israel yet he doesn’t explain how Jews might be more secure inside the State of Israel when he is always begging the USA to pledge millions more American tax dollars to ensure the safety of Israel because he claims they are hated, under attack and in danger from every direction in the Middle East and beyond.

Clearly the discourse is becoming increasingly polarised in such a way that it is hard not to believe there is some deliberate attempt to pit Muslims and Jews against each other.

And hold firmly to the rope of Allah all together and do not become divided. And remember the favor of Allah upon you – when you were enemies and He brought your hearts together and you became, by His favor, brothers. And you were on the edge of a pit of the Fire, and He saved you from it. Thus does Allah make clear to you His verses that you may be guided. [7]