“Extremism” does NOT cause terrorism 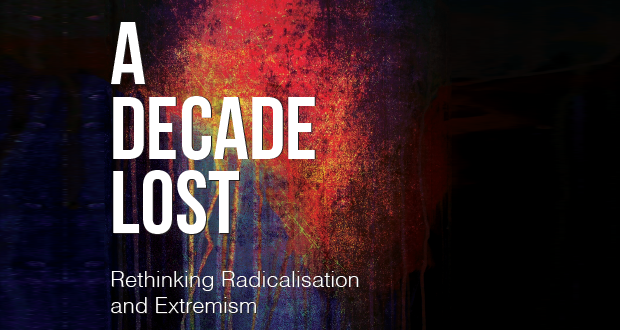 Last night in the House of Commons, think tank Claystone released a ground-breaking report written by Professor Arun Kudnani, author of “The Muslims are coming! Islamophobia, Extremism and the Domestic War on Terror”. The launch enjoyed a full house with attendees from all sectors of society including many policy makers.

The report is a thorough, comprehensive exposé on the fallacy that is the “conveyor-belt” theory to terrorism, which is an underlying premise for most, if not all, government policy on counter-terrorism since 2006; a fairytale invented and pushed by neoconservative think tanks and Islamophobic organisations throughout the last decade. This is the opportunistic blaming of religious ideology for terrorism rather than the host of empirically proven factors that lead to terrorism, in particular political grievances and state violence.

Professor Kudnani argues that not only is this flawed presumption completely bereft of, and in fact in contradiction to, any empirical analyses on terrorism and its causes, but it is in fact counter-productive, and has led to making Britain, and the world, less safe as a result of conflating conservative, “radical” or “extreme” religious ideas with terrorism, effectively ignoring the real, empirical causative factors behind terrorism, leading to a climate of alienation and suspicion towards Muslims. As a result the report recommends – as would any rational person that cares for the safety and security of their society – that the government scrap the PREVENT programme and other similar strategies that have been dismissed as being ineffective and counter-productive.

What follows is a fascinating excerpt from the report. An electronic copy of the report is available here.

In opposition to these studies, there is an increasing number of scholars sceptical of the concept of radicalisation and its implication that radical ideas produce terrorist violence. Marc Sageman, for example, has moved away from his earlier emphasis on religious ideology as a significant factor in causing terrorism. In 2013, he suggested that governments should “stop being brainwashed by this notion of ‘radicalisation’. There is no such thing. Some people when they’re young acquire extreme views; many of them just grow out of them. Do not overreact – you’ll just create worse problems.”[1]

Another prominent terrorism expert who has highlighted problems with the notion of radicalisation is John Horgan, director of the International Center for the Study of Terrorism at Pennsylvania State University. He comments that: “The idea that radicalization causes terrorism is perhaps the greatest myth alive today in terrorism research … [First], the overwhelming majority of people who hold radical beliefs do not engage in violence. And second, there is increasing evidence that people who engage in terrorism don’t necessarily hold radical beliefs.”[2]

Scott Atran, a sociologist at John Jay College, New York, testified to the US Senate in March 2010 that:

Entry into the jihadi brotherhood is from the bottom up: from alienated and marginalized youth seeking out companionship, esteem, and meaning, but also the thrill of action, sense of empowerment, and glory in fighting the world’s most powerful nation and army. … popular jihadi Internet Imams, like Anwar al-Awlaki, are important not because they brainwash, command, or even guide others to actions and targets. Rather, popular radical Imams serve as “attractors” whose message and presence draws into line a searching soul who has already pretty much chosen his own path.[3]

This suggests that religious ideology gives coherence to a group of individuals who are already engaged in terrorism but is not what drives them into becoming terrorists in the first place – which has more to do with a desire to join others in the adventure of fighting a dominant power.

A 2010 study conducted by Jamie Bartlett and colleagues at the Demos think-tank is one of the few to include a control group in its design. It specifically set out to examine the difference between violent and non-violent radicals – a distinction that is routinely blurred in the official narrative and yet is crucial to any effective counter-terrorism policy-making. The study, The Edge of Violence, compared the cases of 58 individual terrorists in Europe and Canada with 28 individual radicals not involved in terrorism. It found that “al-Qaeda inspired terrorism in the West shares much in common with other counter-cultural, subversive groups of predominantly angry young men”.[4] From this perspective, specific kinds of extremist ideology associated with Islamism appear incidental rather than essential to the turn to violence. Having a belief in “extremist” Islam, however defined, does not correlate with involvement in terrorism. There are many good reasons for objecting to reactionary interpretations of religion but the idea that religious ideology mechanically causes terrorism is not one of them.

This is a view shared by the French sociologist Olivier Roy, a widely respected authority on European Muslims. Whereas the official narrative tends to blur the distinction between propensity to violence and radical religious ideas, Roy argues that “the process of violent radicalisation has little to do with religious practice, while radical theology, as salafisme, does not necessarily lead to violence.” The “leap into terrorism” is not religiously inspired but better seen as sharing “many factors with other forms of dissent, either political (the ultra-left), or behavioural: the fascination for sudden suicidal violence as illustrated by the paradigm of random shootings in schools (the ‘Columbine syndrome’)”.[5] Salafi ideology is likely to be part of the way that violent networks articulate their narrative but this by itself is not evidence that religious ideology is causing violence; rather that, within this milieu, theological references provide a veneer of legitimacy. Religious ideology seems to play at most an enabling role in cohering a group, rather than being the underlying driver of terrorism.

Donatella della Porta, a leading scholar of social movements and political violence, has argued that radicalisation has to be understood as a process that is relational and constructed. By this she means that it is a process involving not only the beliefs and actions of oppositional groups but also of the states they are in conflict with: violence is the result of the interaction of the two and their constructed perceptions of each other’s actions, not just the product of one side’s ideology.[6] Whether a social movement or network makes the leap into using a particular form of violence or not cannot be reduced to the question of its ideological content. It is necessary instead to examine how states and social movements have mutually constituted themselves as combatants in a conflict – in this case, between “the West” and “radical Islam” – and address under what conditions each has chosen to adopt tactics of violence, in response to the political circumstances they find themselves in. It is the interaction between these different state and non-state actors that produces a situation in which violence becomes acceptable. This relational aspect requires us to investigate the ways in which Western states themselves “radicalised,” as much as “Islamist” political movements, both becoming more willing to use violence in a wider range of contexts. By analysing the interaction between the different parties in the conflict and how each constructs an interpretation of the other’s actions, it becomes possible to coherently explain the violence of the last decade.[7] This line of thinking returns the current debate on radicalisation back to the older work on the causes of terrorism, such as that of Martha Crenshaw, which regarded political context and organisational decision-making to be as important as individual motivation and ideology.

Applying this approach to patterns of terrorism in Britain over the last decade illustrates its greater plausibility in comparison with the official narrative on the causes of terrorism. According to Home Office figures, the number of people convicted of terrorism-related crimes in Britain more than doubled between 2003 and 2006, before halving again by 2009.[8] It would be overly reductionist to claim that this increase in the number of incidents of attempted terrorist violence is entirely due to the British government’s decision to participate in the Iraq war in 2003. But that decision created the political context within which, for a small number of radicals, violence against fellow citizens appeared legitimate. Turning to specific networks of radicals, we can trace how the changed political context shifted some activists from opposing violence within Britain to supporting it. For example, in January 2005, Omar Bakri Muhammad cited the intensifying War on Terror and the pressures it was putting Muslims under in Britain as reasons for saying the “covenant of security” he had followed since the 1990s no longer held.[9] For the first time he encouraged his followers to join al-Qaeda, with the implication that acts of violence within the UK were now acceptable. What is significant is that this shift occurred not because of any change in religious ideology, as would be expected according to the official narrative, but because of a transformed political environment.[10] In producing the turn to violence, more relevant than Islamist ideology was the news from Iraq of the deaths of hundreds of thousands of civilians following the US and UK military occupation.

In this light, recent threats of terrorism inspired by al-Qaeda are not exceptional but fit a longer historical pattern. The structure of causation of al-Qaeda-inspired terrorism in Britain is not all that different from that of the anarchist bombers of the late nineteenth century or the Provisional Irish Republican Army from the late 1960s, even though the goals and organisational structures of these various groups differ significantly. In all these cases, understanding the roots of violence requires recognising the way that oppositional movements decide to turn to violence in the face of state violence: for the anarchists, it was the violent suppression of the Paris Commune in 1871, in which tens of thousands were killed, that triggered the turn to dynamite and assassination across Europe; for the Provisionals, it was the British army’s violent suppression of the nationalist civil rights movement in Northern Ireland; for the 7/7 bombers, it was the images of mass violence and torture in Iraq. Likewise, the recent flow of foreign fighters to Syria is likely to be linked at least as much to images of repression of the opposition movement by President Bashar Assad’s regime as to adherence to any kind of extremist ideology. The “new terrorism” thesis tends to obscure these connections by assuming that, since the 1990s, religious ideology has begun to directly cause terrorism, independently of political and social contexts. But as terrorism scholars Jeroen Gunning and Richard Jackson note, the behaviour of those labelled “religious terrorists” is often indistinguishable from their secular counterparts. For example, Hamas’ violence against Israeli civilians cannot be adequately explained by religious ideology. After all, religious arguments are used by Hamas to legitimise its ceasefires as much as they are used to legitimise its violence. Its decisions to adopt violence as a tactic at any point are determined by the organisation’s perceptions of the actions of the Israeli government in the context of a military occupation – just as for secular Palestinian groups.[11] Religious ideology provides a vocabulary and a cohering identity but politics provides the impetus.

[2] John Knefel, “Everything You’ve Been Told About Radicalization is Wrong”, Rolling Stone (6 May 2013)

[5] Olivier Roy, Al Qaeda in the West as a Youth Movement: the Power of a Narrative (MICROCON Policy Working Paper 2, November 2008), p. 3