#STAND4UYGHURS
Home / Politics / America / Are they as important as James Foley? 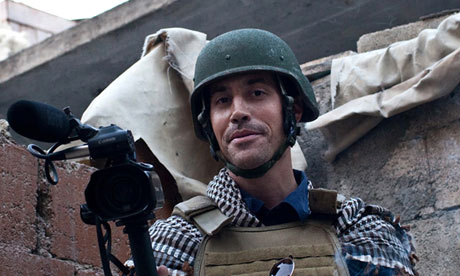 Are they as important as James Foley?

First and foremost, let’s be clear, Islām prohibits the killing of any civilian regardless of nationality, ideology or creed. Let us also be clear that the principles and maxims of justice in Islām is unparalleled. Allāh says in the Glorious Qur’ān:

“Oh you who believe! Be ever steadfast in upholding equity and justice, bearing witness to the truth for the sake of God, even though it be against yourselves, or your parents and kin. Whether the person concerned be rich or poor, God’s claim takes precedence over [the claims of] either of them. Do not, then, follow your own desires, lest you swerve from justice. If you distort [the truth] or decline to do justice, then [know that] God is indeed aware of all that you do.”[1]

The killing of James Foley, a man who put his life at risk trying to expose the world to the suffering of the Syrian people at the hands of the tyrant, Bashar was wrong on all levels; barbaric and inhumane carried out by a senseless group of criminals whose actions represent Islām as much as watching cannibals eating dead Muslim corpses in Central African Republic represent Christianity [2]. The psychology of ISIS is one so brute that it is even alien in the animal kingdom.

Such was the uproar with which the news of his death was met, it  provoked words of shock and disbelief from people to describe the incident such as “horrific”, “unbelievable” and “barbaric”, rightly so. There is no doubting that the manner in which he was killed was truly gruesome. But the wider issue of concern here is the principle that the killing of innocent civilians is an affront to all our humanity as Allāh says:

That being the case, we must ask ourselves: why is the slaughter of the innocent James Foley any more shocking or newsworthy than the deaths of innocent Palestinians in Gaza or those whose lives are cut short by murderous drones in Pakistan or Yemen? Was his death any more gruesome than images beamed around the world recently of a child’s skull cracked open allowing the viewer to have a look through its hollow shell as his father held him in his arms for the very last time in Gaza?[4]  Is it any more gruesome than the images that have been flashing before our very eyes over past few years of untold suffering and carnage such Sunni children in Syria being killed, skinned and then delivered to their homes on a platter to their families by the Alawite regime who espouses sectarian hatred? [5] Is it more gruesome than the double barrel head shot wounds which were so common during the Raba’a massacre in Egypt last year carried out by Sisi? Or is it more gruesome than the Muslim bodies being burned alive by Buddhists as has been the norm in Burma?[6] Did the world unite in condemnation against these atrocities and/or send the military in to rectify the wrongs taking place as they will do now with Iraq? The answer of course is an emphatic “No”. What is a real tragedy is that it would seem that the people of the world have become so desensitised to seeing death and destruction that unless they are provided with gruesome, gory videos, they will not stand up and take notice. Even pictures are not enough anymore. That’s a sad indictment on the world we live in today.

Let’s forget the above instances for a minute even as they may be considered as too remote as they are not people from the “West” and they were not journalists as James Foley was. So what about James Miller [7], a British cameraman and producer who was killed deliberately and mercilessly in 2003 in Gaza by the Israeli Defence Force (IDF) – did we see any special meeting convened by the British government to discuss its course of action for its own citizen as they are doing at this moment in the time on the death of an American citizen? No we did not. Similarly, what about the British activist, Tom Hurndall who was shot in the head in Gaza in 2004 by the IDF or the American peace activist [8], Rachel Corrie who was purposefully bulldozed to death in 2003 by the IDF [9], with the incident being captured on camera? What about more recent cases of 6 journalists who were killed in Egypt including Mick Deane and others now facing imprisonment such as the Australian journalist, Peter Gerste [10] or the 4 journalists killed by Israel in the recent offensive against Gaza including the Italian journalist, Simone Camilli?[11] In each case, was there any talk about dealing with the Israeli army by any of the world leaders, let alone leaders in the victims’ respective countries? No there was not.

The former editor of the Mirror, Roy Greenslade, calls this institutional double standard the “hierarchy of death”. Referring to Northern Ireland Troubles, he wrote of how newspaper editors made a judgement on the newsworthiness of blood being spilled based on the perceived value of the lives lost and this is exactly what we are seeing with this incident [12].

The double standards noted above do not only apply when dealing with certain countries or religions but even when looking at race. We see many young, black men die violently with little media coverage such as the recent case in Ferguson in the USA. Who will send an army to America (as they will do with Iraq) to bring them to account for his death and that of many other young black men who are killed for no other reason other than the colour of their skin?

A further example can be exemplified through the case of Madeleine McCann who is a household name and again, rightly so because of the circumstances of the case. But how many of us know of Abeer Janabi, a 14 year old girl who was gang-raped in Iraq by American soldiers before being slaughtered with the rest of her family in 2006? I ask, how many?

I ask why is the mass scale of daily atrocities and carnage never reported and just callously written off as collateral damage even though thousands of innocent children and women are killed? And for the past couple of years, have we not seen regular American kids shoot, maim and kill so many people? Columbine Shooting, Virginia Campus Shooting, Aurora Film Shooting , Sandy Hook shooting of small innocent children, to name a few. Yes, and these are your “regular, American kids”. This outrage has been added to the other 70 attacks in the US over the last 35 years, many by “good American raised boys” who have killed many innocent people. What has happened here with James Foley is truly awful but I think the world needs to put this in perspective, one dead and all this attention and resolve and questioning, yet another US teenager will go into a school and kill 20 children with a gun and the people of America, as it is a democracy, through their government do nothing about gun control and neither does the government take any action and neither do the nations of the world bat an eyelid on a matter they will say does not concern them. There are thousands of times more deaths by Americans shooting each other each year than by other rogue criminals such as ISIS. The Americans therefore have some very basic questions to ask themselves about what is going on inside its own country before running into other countries like a bull in a china shop.

“Placing human suffering into hierarchies allows injustices to continue without scrutiny or challenge; and it distorts our understanding of the reality of conflicts. It undermines a universal, shared sense of humanity. It is, ultimately, a manifestation of prejudice”[13].

Muslims being asked to condemn the death of the innocent James Foley is rather insulting given that it comes loaded with an islamophobic assumption that Muslims by default condone such brutality. In addition, as Sunny Hundal recently said,

“it’s worth noting that most of the victims, and most of those fighting ISIS daily, are Muslims…In other words, Muslims are being criticised for not condemning a group that is mostly killing Muslims. It’s ridiculous.”[14]

All innocent lives taken in the pursuit of an ideal is a tragedy irrespective of whether it is carried out by the rogue ideology of ISIS members or by nation states such as America or Israel – evil is evil and they are but two sides of a coin filled with hate and greedy pursuits.

And for the avoidance of doubt, I am not doubting for a moment that the killing of James Foley did not deserve to be covered and I mean no disrespect to his grieving family by raising the subject. But I am asking, just as many people ask me, whether his death had special reasons for being so prominent as opposed to the deaths of others and whether the ideology of the USA in furthering its imperialist project is at play here. And the difference between those of us who acknowledge the injustice of Foley’s death together with other similar tragedies is summed up in the words of the young, Yemeni activist in a hearing on US drone strikes, who in response to a question by a reporter as to what he thought of the Boston bombings, gave the following, most profound response which is apt for our response on this issue: