#ChapelHillShooting: The Media Complicity in the Murder of Muslim Student 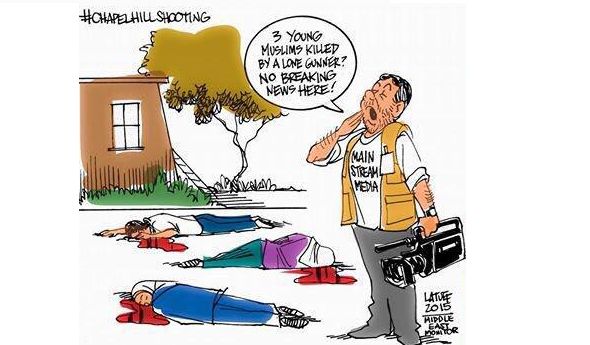 The Media Complicity in the Murder of Muslim Student #MuslimLivesMatter

In North Carolina, US, on the 10th of February 2015, three young Muslim students were shot by their white, atheist neighbour, Craig Stephen Hicks, in the head.

The killings are symptoms of the tenebrific propaganda which has been relentlessly lightening the blood of Muslims over the decade. The impact of it is such that the usually fleet-footed media which pulls no punches in dropping “extremists”, “terrorists” and “radicals” into their rapid-fire reports, lumbered slowly into motion a day or so after the killing. As noted by a writer in the Independent, only a few media outlets were actually covering the issue. Even the BBC picked up on this media insouciance with a piece asking the question, Was the murder of three students in the US given enough media coverage? As though BBC is actually acknowledging the initial lack of coverage, the readers are kindly informed that,

“The case has now been covered by both local and international media.”

What eventually countered the anti-Muslim inertia of the media juggernaut was the social sphere: Twitter and Facebook users forced the media to stand up and report.

Yet when it was picked up, the bias, in comparison to the way Muslims are treated, surfaced. The Daily Fail for instance disgustingly barely covered the reporting, with the top of its website deeming the sacking of train worker and complaints about movie renditions of erotica, more important than the pitted, bullet-ridden skulls of Muslims.

And yes, amongst the various reports in Britain and across the pond, no epithets of “extremist”, “radical”, or “terrorist” were used to describe the perpetrator in anyway.  These are sole preserves of the media for the Islamic faith. The content of the reporting took the paradigm of a “hate crime” motive in the initial reports, whilst the comment sections contained the usual, “let’s not jump to conclusions” themes, something which is only remembered when a Muslim is killed by non-Muslim hands.

I wanted to see how this discourse would shift, and how quickly the major media corps would try to deflect from this motive. At around midday yesterday, I started to analyse the reports. At approximately 3:30pm a relatively unknown paper reported that the police were now looking into disputation involving parking as one of the key aspects which may have triggered the atheist going on a terror spree. One of the first media corps which picked it up was the neocons’ favourite Fox News, who assertively stated that it was the parking disputation, and not hate which was the motive. Unfortunately, the link has now updated its content so the negation element has now been removed.

However the speed with which this was reported and then percolated to other papers was interesting to see. There was none of the lethargy first experienced in actually reporting the act of “terrorism”. The “parking motive” over the day became the dominant reason as the day, and the reports progressed in their updates.

Later on in the day reports from (US) local papers began to surface that the father had claimed it was indeed a hate crime based on the Muslim identity of the murdered. There was animosity towards the deceased which was based on their religion and culture and which had manifested itself through previous threats with a gun, and now through the cold-blooded manner in which the victims were shot (i.e. all three in the head).

As I write this, reports are now again deflecting the “hate motive” by citing the typical get-clause for white terrorists: mental health issues. Quite.

Regardless of motive, what is established is that Craig Stephen Hicks was “radicalised”, as evident through his Facebook posts. His militant extremist “new atheism” found fuel in the writings of anti-Muslims, Bill Maher, Richard Dawkins and the words of Stephen Fry.

Note, that if a Muslim had killed three atheists, even if the motive of hate was tenuous, the Muslim quality would be sufficient to warrant blame, first upon the Muslim, and then the faith of Islam. This is a typical media mechanism which is employed almost every time an incident occurs.

Using this strawman mechanism, atheism can be blamed also.  Hicks’ hatred of religion, which was fuelled by anti-religionist, extremist ideologues, is what fuelled his anger born from an argument which ended in a tragedy. Perhaps there was something within his atheism itself which allowed this sickening act to take place. Perhaps he considered himself as genetically superior to the Arabs and therefore dehumanised them enough for him to puncture bullets through their heads; or perhaps it is the amorality of atheism, which resulted in him killing three Muslims over a parking ticket; or maybe it is was the combination of all these tropes which led to his murder. How about race? We know Hicks was an ardent gun advocate. Maybe white people in America have a greater affinity with guns because they feel their white power structure is being threatened by non-whites.

I am fully expecting national debates in Western countries on the integration of whites and/or atheists. Here in the UK, I envisage Nicky Campbell ensuring questions are asked on his BBC Big Questions programme whether new atheist extremism is fomenting intolerance of people of religion, and why there is so much media inactivity, unless forced, with “white on Muslim” far-right/atheist crime, yet so much frenetic, detailed coverage when the converse occurs.

Perhaps a counter-extremism policy which discriminately targets white atheists needs to be formulated off the back of this terrorism. The policy, like the Stasi-state creating PREVENT Strategy would need to target the “extremists” who inspire such terrorist atheism, blocking channels of radicalisation by “disrupting” people like Richard Dawkins, who was cited attacking religion by the killer before the killing.

Moreover, atheists must now remain in a perpetual state of apology for the vicious crime committed by their ideological comrade. When they do come out and apologise, they must be told that they “need to do more” because they have a “special burden”. The heads of Western states should travel to the US, lock arms with Muslims and parade through North Carolina University, as a show of solidarity with the freedom of religion, and freedom from atheist terrorism.

As I write, not a single Western state official has hit the podium to pour out commiserations to the Muslim community, as was done to the French and the Jewish community during the French attacks.

No. Not even Barack Obama has condemned the attack. The emphasis of Western states, in particular the UK which is in the grip of deceitful neoconservatism, has always been on speaking against “Islamist extremism” and “Islamist terrorism”, not for Muslims, unless of course those Muslims are undermining the Muslim minority.

The media bias is having devastating consequences. How many papers/news corps, for instance, have reported the shocking treatment of a nine year-old Muslim boy who had his head smashed on the floor by a Swedish security guard? None. Were it not for the social media outrage at the lack of initial coverage of the massacre, the news of this terrorism would have remained suppressed, or perhaps confined to the lower, less visible areas of news websites.

With round the clock propaganda against Muslims, and disproportionate, negative coverage aired by the likes of Fox News, whose “experts” lie to whip up anti-Muslim hysteria, or even British journalists such as Cathy Newmam, who also lied to perhaps move up the lucrative Islamophobia-industry, the media machine is complicit in the deaths of these Muslims, by creating an atmosphere where Muslims and Islam are perpetually architected as the enemy. Media outlets like Fox News, the Spectator, Daily Fail and other right-wing/neocon papers are complicit in the deaths of Nahid Almanea, who was beaten and stabbed to death in Britain; they are complicit in the death of Mohammed Saleem, an old man returning from prayers who was also stabbed to death; they are complicit in the tearing off of hijabs and niqabs from heads of Muslim women in the streets of Europe; they are complicit in fostering the hatred which is requisite in creating the primordial atmosphere of Nazi Germany. As long as this complicity continues, there will be more fatal attacks against Muslims.

Notes: This article was originally posted on https://coolnessofhind.wordpress.com