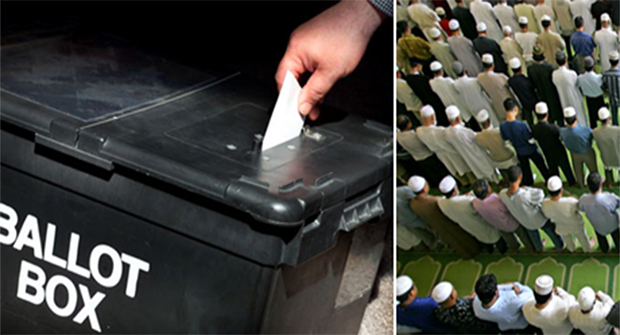 Executive Summary
On 5th Mary 2011, a referendum will be held in the UK to ask voters whether they wish to change the current way MPs are elected into parliament, replacing the existing “First Past the Post” (FPTP) system with the “Alternative Vote” (AV) method.
Such a decision will have an impact on the nature of future British governments and will significantly alter the political dynamic in the UK. As such, the Muslim Research and Development Foundation (MRDF) felt it necessary to issue advice to Muslims in the UK regarding the potential impact of the proposed change and what is perceived to be the most suitable option, and Allah knows best.
Whilst it is difficult to make definitive statements regarding the impact of the change under AV, it is clear that the AV system will force candidates to work harder and engage more with their constituents should they wish to be elected. At the previous general election, over two-thirds of MPs were elected without a 50% share of the vote – under AV this will not be possible. Should no candidate reach the 50% threshold, the candidate with the least number of “first-preference” votes will be eliminated and their votes redistributed. Therefore it will be incumbent upon candidates to gain widespread support from members of their constituency.
Whilst it is difficult to predict the outcome of a general election under the AV system, this document provides relevant scenarios and posits that under AV, there will be a significant impact on politics in the UK and will result in:
1. Less tactical voting – where individuals vote for either Labour or Conservative, as opposed to the smaller parties, so as to make their vote count;
2. Less divisive politics – where candidates seen to be pandering to the far-right or the far-left are likely to be unpopular with the majority of voters;
3. Less chance of fringe or extremist parties winning seats.
As a result, we posit that the AV system will provide a drastically improved electoral system allowing for more representative and inclusive elections. Would-be MPs will have to work harder to satisfy more of their constituents. Muslims constitute the largest minority in the UK and stand to make substantial gains given the greater value and relevance of our votes.

1 What is the AV system?
Under the current electoral system, the candidate who obtains the most votes in any constituency will become a member of parliament (MP). However under the proposed Alternative Vote (AV) system:

2 How will this change our voting?
The principle aim of the AV system is to be more representative. Requiring political parties to get over 50% of the votes will result in MPs having to seek support from parts of the electorate who they have not traditionally appealed to nor campaigned for, including Muslims.
Under the current voting system (First Past the Post), if a candidate gets the most votes with 30-40%, he/she will win the seat and all other votes are discarded. Under AV, if the candidate is unable to secure a simple majority (over 50%) then the supporters of the other parties can still have a say in deciding who gets elected through their 2nd preference votes. For example, a Conservative candidate who has always won with 40% of the vote will be forced to campaign to secure the further 11%.
This should put an end to MPs whose traditional support base is on its own the largest, but who are unpopular with the vast majority of constituents. Under AV, even if your 1st preference candidate is not elected, you will have a say in deciding who finishes last.

3 What impact will AV have on politics in the UK?
The potential impact of the AV system is far reaching with around half of all current seats in parliament considered “safe seats”. “Safe seats” refers to constituencies where the same candidate/or party is elected year upon year due to a significant support base that always votes for them. Additionally around two-thirds of seats in the previous election were won with less than 50% of the vote. Thus under AV, candidates will have to work harder to keep their “safe seats” and win over people who have not traditionally voted for them. The end result should be that the elected MPs can claim to represent the preferences of more people within their constituency.

3.1 Less tactical voting
Under the AV system, the level of tactical voting would likely be reduced. The vast majority of voters approach the election with the aim of making their vote count. As such if they support a party which the polls show is unlikely to win, then they restrict their choice to Labour and Conservative. This was one of the main reasons that Lib Dems pushed for the referendum. They felt many voters despite supporting them have made the tactical decision to vote for Labour or Conservative.

3.2 Less divisive Politics
Under AV, it is likely that parties indulging in divisive politics will be penalised. This includes not only the BNP but also the Conservatives, as became evident in Cameron’s recent Munich speech and recent tougher stance on immigration. This is illustrated by the previous elections where Muslim participation increased mainly due to the rise of the right – BNP, UKIP and Conservatives. Muslims did not necessarily know who the best candidate was for them, but were sure who they were against. This partly explains the spike in Lib Dem votes among Muslims.
The result of apathy towards Labour and apprehension towards Conservatives was clear in the last election resulting in a hung parliament. Under AV, the effect of divisive politics would become more acute and the Conservatives could no longer afford to engage in such politics as votes against them will count as well as votes for them. They will be forced to rethink their policies to appease a larger cross-section of British society.
If a political party fails to adopt in this manner, such as the BNP, then they will be further sidelined from mainstream politics. Apart from the very small number of people who vote for the BNP, everyone else is incredibly averse to them. Those who do not put them as 1st preference will likely put them as their last preference. Overall the AV system should result in a much needed shift in British political culture in the current context of rising Islamophobia, towards a more inclusive politics.

3.4 Muslim “safe seats”
From a solely Muslim perspective some may ask whether we really want to put at risk or jeopardise the existing “safe seats” that various Muslim candidates hold in constituencies with substantial Muslim populations.
To begin with, it is not necessary that such Muslim candidates will lose their seats under AV, unless they are divisive in that while all Muslims vote for them, all others are completely against them. Even if this is the case the other candidates will not be elected without the 2nd preference support of a large number of Muslims from that constituency.
Additionally we should give importance to significant Muslim minorities in many other constituencies. They will now have a say in who gets elected forcing the candidates to include those Muslims within their support base.
We should keep our objectives as Muslims firmly within our sights. Our primary objective is to secure the interests of Muslims as opposed to Muslim candidates. Let us not simplistically equate the interests of Muslims with electing a Muslim candidate as a member of parliament. In fact we often find that the Muslim candidate is absent when it comes to matters concerning Muslims or even against the Muslim cause. One of the main reasons is that Muslim candidates, especially those of the main parties, are required to have allegiance to their party line before all else. If they occupy a senior post, they have likely got there through precisely being one of the party faithful. Such Muslim politicians are of two types:
i) they either blindly follow the party line at any cost even if that be to support anti-Muslim policies;
ii)they not only try to reconcile the two but are a positive agent of change within their party and government representing not just their constituents but also the interests of British Muslims at large.
If a Muslim occupies a “safe seat” but is from the first category then we are not that concerned with keeping that individual. If however he/she is of the second type, then we should do all that we can to keep them in their seat.
In other words we should focus on putting power in the hands of the Muslim voters as opposed to Muslim candidates. This way we will make sure that issues of concern to us are put at the forefront of the promises made by candidates. This will not only assure that Muslim candidates give weight to Muslim issues but will also lead to non-Muslim candidates in each constituency to pay special attention to our needs and concerns.

4 Conclusion
Disaffection and disillusionment with the political process are widespread throughout society with voters asking whether their vote really matters and whether they really have any influence over the formulation of party policies. Turnouts are at best around 50%. This problem is even more acute within the Muslim community with many apathetic with the political process and others feeling as if their vote makes no difference and that all parties are equally as bad and disadvantageous for Muslims.
Under the AV system, these will no longer be valid excuses. For those in the Muslim community who say “what is the point, what difference does it make”, they will no longer be able to rely on this as an excuse. Everyone’s vote can have an effect on who wins a seat and who becomes the most unlikely to win. It will also force MPs to work harder to win the support of more of their constituents, including Muslims.
There needs to be a fundamental shift in the Muslim mindset. From trying to contain the BNP and keeping Muslim “safe seats” to a mindset where we are positively influencing local and national politics through policy concessions in mainstream parties that favour Muslims. A mindset where we are making all candidates work harder for the majority and the minorities including Muslims.
There also needs to be a greater understanding and engagement from the Muslim community in the political process. Regardless of which system is implemented following the referendum, there will only be a change if there is a shift of attitude and level of engagement within the Muslim community. Despite being the largest minority, the Muslim community does not possess an effective lobby relative to other minority lobby groups, and this will need to be an area for improvement.