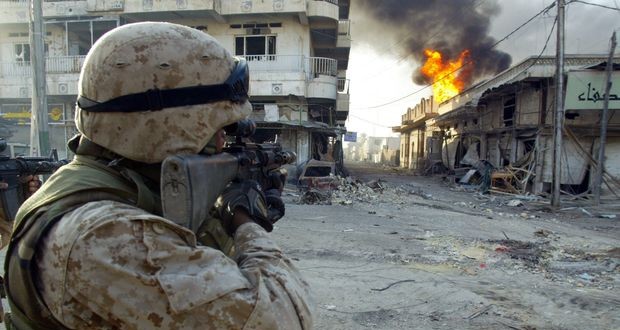 The General Secretariat of the Association of Muslim Scholars in Iraq issued a statement about the horrific massacre, committed by the (Iraqi) ‘National Mobilisation’ militias against civilians after seizing control of the city of Al-Karmah.[1] The text of the statement is as follows:

The horrific massacre, perpetrated by the ‘National Mobilisation’ militias against civilians after seizing control of the city of Al-Karmah:

In the name of Allāh, and may peace be upon the Messenger Muḥammad, son of ʿAbdullāh (sall Allāhu ʿalayhi wa sallam), and upon his companions, his family and all those who give him allegiance. As for what follows:

Numerous reports and sources recounting the statements of eye-witnesses have confirmed that militias ascribed to Tayaar Risalyoon, of the Iraqi Da’wah party, led by the Iraqi State Member of Parliament, Adnan al Shahmany, one of the factions of the so-called ‘National Mobilisation’ militia committed a heinous massacre, killing 17 civilians under the pretext of them supporting “terrorism”, from amongst 73 civilians arrested from the Al-Rashad area in Al-Karmah, in the northeast of Fallujah.

Numerous reports, citing many women in the city, have indicated that National Mobilisation militias segregated men of all ages from their women at refugee camps in the northern district of Fallujah. Hundreds of them have been taken into detention centres and are experiencing severe physical and humiliating abuse in front of their women. They are the subject of profane sectarian influenced insults and offence. This is after falling prey to the government’s promises, contained in paper slips dropped by aircraft on the city, and statements emerging from politicians. It is feared and expected that these captives will meet the same fate of other supported religious cleansing. Their fleeing from the misery of the raging battles in Fallujah and its surroundings did not spare them, nor did the old age of their elderly, nor the young age of their helpless children.

Concurring events and revelations have shown that the majority of the families of Fallujah are now exposed to similar brutal crimes, as a result of the sectarian frenzy, fuelled by the Iranian Regime through its right arm commander of the Revolutionary Guard, Qassem Soleimani. Soleimani directly oversees the sectarian-fuelled war against the citizens of Iraqi cities.

The crime in Al-Karmah confirms what was previously uncovered of politicians, both ministers, deputies and others engaging in criminal military activity, both of murder and torture, overseeing ethnic-motivated executions and genocide. This is despite them being in a position of responsibility, which makes this matter particularly, and incomparably atrocious. Likewise, we have not heard of any condemnation from the acclaimed defenders of so-called democracy, composed of the coalition or other than them.

The association confirms that the battle for Fallujah, and what occurs in it, around it and as a result of it, is a confrontation of ideologies, methodologies, systems and strategies. It is not a normal battle or confrontation. In addition to this it carries further and larger dimensions far beyond targeting a specific city with the excuse of targeting terrorism. The decision for this confrontation was taken from outside Iraq for the realisation of Iranian expansionist interests and objectives, bolstered by historical bitterness. It serves its hegemonic project of overruling the whole region, manifesting in the genocide against Fallujah, Al-Karmah and all that preceded it of massacres around the world.

General Secretariat of the Association of Muslim Scholars in Iraq