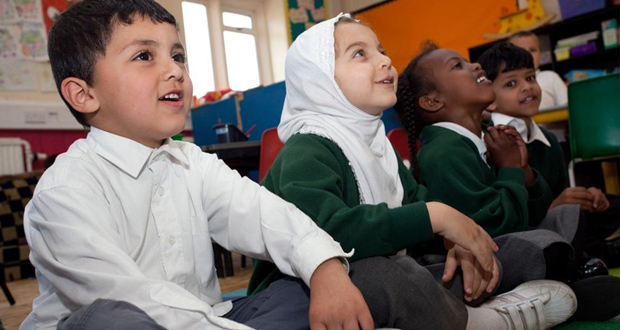 Sometimes, when faced with utter stupidity or deep-rooted bigotry, one has to be blunt. This is precisely what furious parents have been doing since the Sunday Times published one of its usual outrage-gauging pieces dutifully testing the waters for how much those with power can get away with.

It reported yesterday that Ofsted’s new chief inspector Amanda Spielman called for Ofsted inspectors to question Muslim girls that wear hijabs in primary schools, to find out why they do so. What has earned her even more ridicule and outrage was her justification: “creating an environment where primary school children are expected to wear the hijab could be interpreted as sexualisation of young girls.”[1]

Muslims from all backgrounds—as well as many non-Muslims—have expressed disbelief and outrage. The General Secretary of the Muslim Council of Britain, Harun Khan, stated:

There have also been the usual handful of collaborators, who have obediently jumped in to ossify the ancient racist stereotypes that fuel or allow such demonstrably fictitious narratives and ignorant policies to exist. Sadly there is no shortage of “useful idiots” that will happily (often ignorantly) feed into colonial narratives of salvation, or stereotypes that demonise the very minorities they claim to belong to.

Many people talking about this current debacle have been doing so without realising, let alone addressing, an implicit universality of white cultural tastes when talking about the hijab. The “young kids aren’t required to wear hijab” argument misses the point; young kids aren’t “required” to wear many things that they still wear—this is not about “sexualising” anyone.

The point here is of the tastes, norms and normative behaviour of one cultural or religious tradition compared to another. In the United Kingdom today, the dominant (white, so-called “liberal”, Christian-secular[3]) cultural norms of dress are such that the head is uncovered. This happens to be in contrast with the cultural norms of most, if not all, Muslims—regardless of where those norms derive from.

Those that accuse the hijab of “sexualising” a girl or a woman have taken today’s White western dress tastes and norms as the standard benchmark of normality, to which others are subjected. So, to them, the hijab is something “additional”, and must be explained—which is where false stereotypes about Muslims that have long been in the Western Christian imagination are used, as well as projections of people’s own insecurities. They must be adding that “extra” garment because their backwards culture oppresses women, or their men cannot control themselves if they see a few strands of hair, for example.

In my opinion, Muslims should not feel the need to justify the hijab to anyone. Instead of trying to undo the centuries of brainwashing against the “Barbarian” or “Infidel” or “Muhammadan” or “Extremist” (delete depending on era being discussed), we should merely ask the question: is everyone sexualising their children by putting clothes on them full-stop, or are they simply garments that are outside the dominant cultural norms? Would Amanda Spielman accept there is a possibility of her children being “sexualised” if she happened to visit or emigrate to a culture where the norm was to be topless in public? Ironically, she would probably regard those less covered to be “primitive” or “uncivilised”.

It is very important to remember at times like these that the actual locus of this latest debacle is not what is intended. This is not about protecting girls, as an extremely narrow reading, shorn of context, would suggest. In fact, if the interests of Muslim girls was anything important, then Ofsted would be doing precisely the opposite of what it has been.[4] This is merely one example of a growing right wing trend in Britain to reverse multiculturalism—a phenomenon some people have scapegoated as the cause of all of their grievances.

As Professor David Miller stated in his report on neoconservatism—the ideology that drives much of the anti-multiculturalism agenda in Britain today:

“The proponents of this agenda have sought to increase public support by conflating complex contemporary debates about immigration, austerity, multiculturalism and women’s rights with the anti-Muslim discourse associated with the on-going ‘War on Terror’.”[5]

Ofsted was accused of becoming “politicised” when Michael Gove—an extreme proponent of this ideology—took over the Department for Education as Education Secretary, which coincided with Ofsted’s newfound “obsession” with Islam and Muslims.[6] When he appointed a new head of Ofsted, Michael Wilshaw, the General Secretary of the National Association of Schoolmasters Union of Women Teachers (NASUWT), Chris Keates, claimed that Ofsted had become a “political weapon”, and nobody regarded it as independent anymore.[7]

Michael Gove was a founding member of the infamous anti-Muslim Henry Jackson Society (HJS), which has long been linked to and funded by extreme Islamophobes from overseas.[8] Its Associate Director Douglas Murray, for example, is on record for urging that “Conditions for Muslims in Europe must be made harder across the board,”[9] with Schools being just one obvious example.

Of course, one of Gove’s most famous scandals— the effects of which Muslims pupils particularly in deprived areas still suffer from—was the notorious Trojan Horse hoax. This was the Islamophobic witch-hunt which whipped up mass panic and national hysteria, that turned exceptionally successful schools run by Muslims into now-failing schools pushing Gove’s ideology, which was eventually exposed by an Education Select Committee as being a hoax—after all the damage had been done.[10]

Michael Gove was sacked as Education Secretary and replaced by Nicky Morgan in 2014, but was accused of “back-seat driving” the Department for Education with many allies embedded within it and Ofsted.[11] Furthermore, it was revealed last month by Cage that a “network of hate” still operates across several institutions inclu00ding Ofsted, with the current head of Ofsted, Amanda Spielman—who made yesterday’s outrageous comments—having had a “lengthy working relationship” with Michael Gove, as well as being involved in the Trojan Hoax scandal.[12]

She was controversially appointed as the head of Ofsted despite being rejected by MPs in the education select committee last year. Despite the MPs interviewing her concluding she was neither qualified nor prepared for the job, the Education Secretary strangely still forced through her appointment.[13]

There may be genuine arguments against some people’s interpretations or concretisations of so-called “multiculturalism” that are actually grounded in reality, as opposed to carefully crafted dog whistles to distract people from real issues. For example, there is a benefit of a shared culture or norms among a body of people living together. However, the answer is not to force the tastes of one particular culture over another. If someone regards Muslims’ refusal to adopt their cultural tastes and norms as problematic, then the problem is with them not with Muslims, especially since Muslims have generally adopted beneficial aspects of other cultures wherever they have existed in their 1,400-year history.

If, on the other hand, millions of pounds of propaganda and egregious examples of state coercion and structural racism are required to forcefully impose certain cultural norms on Muslims (or anyone else for that matter), then that speaks volumes about the relative strength, logic and benefit of such cultural norms compared to normative Muslim practices.

As many have noted both today and in recent weeks, western societies would be a much safer place for both men and women if only a few examples of Islamic cultural norms or guidelines were to be benefitted from.[14] This is what makes the scapegoating of Muslims and Islam by people in power to direct outrage away from the real problems of society even more tragic. If we were not busy focusing on scapegoats or refuting tired stereotypes and lies, we could talk about how schools, even in Theresa May’s own constituency, are having to ask parents to help pay for essential school equipment as a result of funding cuts,[15] or how sexual assault against children by children is increasing year on year to shocking levels.[16] That is, if we really had the interests of children at heart.

[3] I say “Christian-secular” as I believe secularism in the United Kingdom to be a manifestation of today’s Western Christianity, or at least in many areas a culture based on Western Christianity with parts altered or removed from it altogether (such as doctrines regarding God).