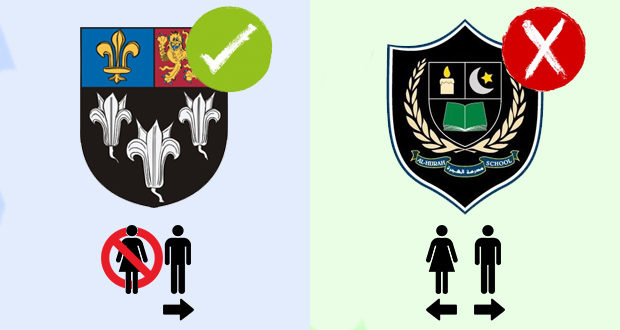 “Segregation” of boys and girls in Islamic school ruled unlawful

Without a hint of irony, the Court of Appeals have ruled in favour of Ofsted in a row over “gender segregation” in schools in the same week as a BBC investigation revealed shocking institutional failures surrounding an explosion in child-on-child sexual abuse in mixed schools across the country.

In June 2016 Ofsted suddenly placed an inner-city Birmingham school with an Islamic ethos into special measures, citing the separation of male and female students due to its Islamic ethos as the reason, despite it not being a problem for many years.

Birmingham City Council however, instead of acquiescing to such treatment as is sadly common with many Muslims, challenged Ofsted by bringing a judicial review claim to the High Court, because the Al-Hijrah school “had been held to a different standard than other schools with similar arrangements, which had not been downgraded by Ofsted as a consequence.”[1]

In November 2016 the High Court judge Mr Justice Jay ruled that it was wrong for Ofsted to penalise the Al-Hijrah school. He lifted a ban Ofsted put on the school, ruling against Ofsted principally for acting unlawfully by “changing its mind” about the impact of “segregation”, stating that its inspectors were motivated by actual or apparent bias.[2] He noted that the school had separated 9-16-year-old boys and girls in the classroom “for a number of years without comment or objection” from Ofsted.[3]

In July of this year Ofsted launched an appeal against the High Court decision against them, and today the Court of Appeal have ruled in their favour, in a ruling that has perplexed many. They stated that separating boys and girls whilst not disadvantaging either, was still contrary to the Equalities Act 2010. Ofsted has, as a result, come under criticism from many in the Muslim community due to its specific treatment of Muslim schools for doing what many Jewish and Christian schools have been doing for many years.

“Ofsted should be put into special measures”

Ofsted’s newfound obsession with Muslim schools coincided with the appointment of Michael Wilshaw, its chief inspector from 2012-2016. Wilshaw was appointed by the neoconservative Michael Gove when he was education secretary, who has repeatedly came under fire for allegedly “politicising Ofsted”.

Michael Gove was a founding member of the infamous anti-Muslim think tank Henry Jackson Society (HJS) linked to and funded by extreme Islamophobes from overseas.[4] Its Associate Director, Douglas Murray, is infamously on record for urging that “Conditions for Muslims in Europe must be made harder across the board,”[5] with schools being an obvious locus. Professor David Miller explains in a damning report into the neoconservative ideology that drives the likes of the HJS:[6]

The neoconservative ideology’s Cold War style obsession with un-Britishness, its desire to strengthen organs of the state, weaken civil society’s ability to dissent, and so on, have been thought to be behind Ofsted’s increasing politicisation and power over schools across the country.

When Wilshaw was appointed, the general secretary of the National Association of Schoolmasters Union of Women Teachers (NASUWT), Chris Keates, complained that Ofsted had become a “political weapon”:[7]

It was only yesterday that one celebrated head teacher wrote a blistering critique on Ofsted itself needing to be put under special measures, having become far too influential and “ruining teachers’ lives”.[8]

What should Muslims do?

There are two ways forward for Muslims now, if they wish to maintain their own harmless normative practises and identity in the face of growingly irrational hostility.

The first is to suddenly acquire privilege and power, and afford to send their children to the best schools in the land—which are almost invariably sex-separated. This way they will have the honour of their views being entertained as part of a rational debate on equal footing, rather than by coercion if the interlocutors are unequipped with cogent arguments.

Until that happens, the second choice will have to suffice. That is, those brave enough to put their necks on the line challenging institutional Islamophobia and a two-tiered system, must be supported in their challenges. History has shown that this is a long road and the early attempts are always peppered with defeats. This must not dissuade Muslims, and indeed others for that matter, who realise the agendas at play here. It is good fortune to have antagonists so blinded in their obstinate shooting from the hip that they have ended up inadvertently firing at a whole host of Jewish and Christian schools as well. Thus a ruling as impactful as this should go all the way up to the Supreme Court, and now would surely be a good time for the otherwise timid to take a stand and voice their support.

Some may spend hours arguing with the propaganda of those that try desperately to spin benign practises through the lens of national security or “extremism”, in the service of their Islamophobia. But for all rational adults in this case I believe they have exposed themselves and the weakness of their own ideology—whether neoconservatism or faux liberalism—that rely on the forceful arm of the state to coerce where their arguments fail.

Normative Muslim practices are proven not only to result in a better-quality education and development, but also protect children from the plethora of ills that are presumably a justifiable cost in the service of other people’s ideology.[9] As the BBC investigation revealed just days ago, sexual offences by children against children are on the increase, with over 21 incidents per day on average in England and Wales, more than six reported rapes per day (one every four hours), including on school premises.

It is an open mind and sound intellect that is required to appreciate the wisdom behind such practises, which exist in some form or another in all wisdom traditions throughout the globe. Encouraging people towards thinking clearly should take priority over arguing about specific practises.