Have we turned our backs on Syria? 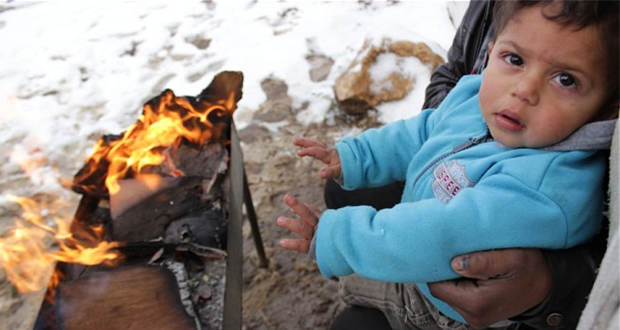 In the wake of the attacks on Charlie Hebdo in Paris, France, the western world has united on a mass scale in solidarity for the twelve lives taken relentlessly by two gunmen ‘branded’ Muslim terrorists by the media. I use the word ‘branded’ because the inconsistencies of these attacks and the two men accused impose many questions like the attackers’ true identity and motives! Before proceeding, I must state that the intention of this article is not to warp your minds with such questions motivated by my own doubts of who is guilty and responsible for such an event.

Rather, world news media and the inherent hypocrisies therein are intended to misguide world opinion and deliberately raise tension and increase hatred towards the religion of Islām. This is evidenced by the double standards of those exaggerating and exacerbating the news of the Charlie Hebdo murders, ignoring in tandem the tens of Syrian children who are freezing to death through conditions not obscure to the Western world.

Hypocrisy is gleaming my friends; shining brighter than ever before. In the past hypocrisy was a trait that was worked undercover in order to instigate its evil roots. In the 21st Century it is a matter of: “Hey we are hypocrites, let me deceive you without confronting the general intellect of people”. Fortunately, there are a vast number of people who have stood raising their voices against the obvious bias and lies that have come with the never-ending coverage of this particular attack.

Is it acceptable that there has hardly been a single article or reference in the Western Media on the on-going bombardments in Syria over these past few months? Is it any surprise that the BBC has demonstrated no interest in the Syrians facing unbearable conditions and those that have lost their lives as a result? It is not bad enough that some die of starvation in remote refugee camps scattered across the Middle East and Eastern Europe? We are simply not seeing the Western world jump in agony and outrage by the crisis in Syria in which hundreds of thousands of civilians have been killed, and millions suffer the harsh, bitter cold, sweeping through the Middle-East?

The Syrian Government has taken this opportunity of having all eyes on France to heavily bomb its country’s people further, the rocket fire and air attacks have been of significant growth since this attack in France and it would not be the only country out there to take its chances to open its wounds further.

We seem fired up in the bellies while anger has taken control of our rational and emotional processes as a result of the Charlie Hebdo attacks. However, why, as Muslims, do we not have the same anger and emotion infused at the Syrian Crisis this winter? As a Palestinian, I am not afraid to say that Gaza is not the only Muslim oppressed land that we should direct our emotions and money into. They are not superior to other Muslims and 2000 deaths against 200,000, let alone the displaced in and out of Syria, is no comparison. We cannot allow the bias that we condemn to enter our hearts as Muslims or mankind as a whole.

“O mankind, indeed We have created you from male and female and made you peoples and tribes that you may know one another. Indeed, the most noble of you in the sight of Allāh is the most righteous of you. Indeed, Allāh is Knowing and Acquainted.”[1]

If, for a second, we assume that this was indeed carried out by the two men that were so conveniently singled out as suspects on the very first day of the attacks, then why is it the entire Western world and many of its followers plagued the streets with their anger and calls for ‘freedom of speech’? The answer is quite simple really, the insecurities manifested into the general public domain of the West has certainly been subject to significant growth especially since the ‘Mother of all of terror attacks’, 9/11. This event simply exacerbated this sentiment further.

Of course, since the fall of the Soviet Union it also comes as absolutely no surprise that the ‘collective west’ needed to unite all efforts to fight Islām, as such making it the new enemy. This is to cover up their ghastly hidden agendas for controlling world resources such as oil, gas, diamonds and gold, and of course, to hamper the real fear of Islamic growth in the West. Sadly, this sentiment arrives in tandem when our golden age of science and philosophy has been put on hold and replaced with a draconian feeling of impending doom, while we watch Muslims kill and be killed and say or do nothing.

With the economies of the oil rich Gulf States taking a bitter turn by the enormous fall in oil prices this winter going from $120 a barrel to an unbelievable $47. Added to this, the political uncertainties in the Middle East, disunity amongst the Arab states and the suffering of the Syrians continues to worsen. Indeed, the combined impact on the lives of Syrian refugees and the Palestinians made homeless by the repeated and callous bombing of Gaza by the terrorist state of Israel, as well as those refugees living in Syria (e.g. the Yarmouk Refugee Camp) has formed a human catastrophe of incalculable size. Alas, the world continues to play down and completely turn a blind eye to the suffering of those innocent civilians. Their guiltless lives are not as precious as those cartoonists, and whether we explicitly believe this or not, the deafening condemnation of the Paris attack demonstrates such a sentiment.

But who is it that we should be looking to for help? For aid? For influence and leadership when flurries of Muslims rush to social networking sites to condemn the attacks in a manner almost submissive and undignified? I remember some Da’ees making a similar mistake when the first Denmark cartoon was published; it was demoralising to say the least and demeaning to their stature and independence.

We are being asked to apologise, and for what it is we are apologising, I am not sure. These cartoons are but fabricated illusion, distastefully and purposely exasperated by what seems to uproot the exact depiction of ‘freedom of expression’ that the Western states so forcefully wants us to blindly believe.

Maurice Sinet was an 86 year old ex-employee of the Charlie Hebdo Magazine, fired in 2009 for his anti-Semitic publications that caused outrage amongst the Israeli Lobbies that bully the likes of America, France and the UK on a daily basis.[3] These double standards are vastly common amongst these states, conveyed by the control they have over their media outlets. I would love to give you example after example but pummelling the concepts that we know so well is getting us nowhere. If it helps you sleep at night knowing that these people are most definitely liars, then fine, but we must prevail through intellectual speech rather than allow anxiety and inadequacy to creep into our hearts on a daily basis from the mass injustices we see around the globe.

It seems that our unity in marches and our echoing response to the recent events in France totally outweighs what is, no doubt, a real calamity many times greater. We must prevail against even our own subconscious orienteering, developed over many years of being indoctrinated by Western media to see certain lives as being more sacred than others. The power and ability some Muslims have shown to possess is impressive, but to accentuate Western media bias is truly disappointing.

I would like to close with a verse from the Qur’ān:

“Do the people think that they will be left to say, “We believe” and they will not be tried?”[4]

Respected reader, we are the last of all Ummah’s to walk the Earth. We know that these are indeed the last days of the earth’s life cycle. It is better for us now in this gold-rush of good deeds to endure some hardship. The Lord Who has decreed and is testing the Syrian refugees with bitter cold, and bone-shattering winds is the same Lord who is assessing our response, our test of responsibility not being much less in magnitude than their test of patience. I urge you all to support our brothers and sisters, suffering in these unfathomable conditions with whatever you possess in your capacity; this is not the time in the world’s life cycle for extravagance and lavish living. Donate to aid Syrian refugees, especially the children. One such charity you can do this by is Muslim Aid by clicking here, the video below is an example of what the children there are going through and who still need our help and dua.

Remember that this world is not worth a mosquito’s wing to Allāh ‘azza wa jal. Do not fear hardship my brothers, instead fear that there is nothing in your life that you are not being tested with and thus, perhaps, not favoured in the high ranks like the penniless martyrs that are being crowned kings of the universe on a daily basis. Where do you stand against your Nafs (self) and base desires? My brothers and Sisters you have the keys to self-empowerment. Many of you reading this now have had those ultimate high Īmān moments where the real intellect is truly awakened, but do not pressure yourselves to have this feeling 24/7 as that is not the sole purpose of Īmān. Its security lies with pleasing Allāh, not just with how you feel. Make that courageous step right now, reach for your wallets, reach for your bank cards, now and I mean now and donate to the Syrians in need. Nothing is stopping you my friends, doing things on the spot when you know it is right and called upon is where your recognition lies with Allāh!

Please donate to aid Syrian refugees, especially the children. You can do so by clicking here