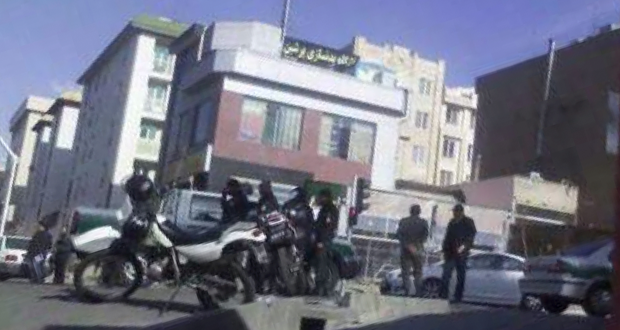 ‘Unity’ or Hypocrisy? The Iranian Regime’s Game with the Sunnis of Iran

Whilst the world was occupied with the events in France, it was ‘Shia – Sunni Unity Week’ in Iran, which commenced on Monday the 5th of January. The picture above interestingly shows how “Iranian security forces barred Sunni worshipers from entering a Sunni prayer site in Tehran on Friday 9th January 2015, preventing them from holding congregational Friday prayers.”[1] The 9th being the last day of this so-called unity week.

Without doubt this ‘Shia – Sunni Unity Week’ sounds appealing on paper, apparently aiming to keep differences at an academic level and working together to resolve issues such as poverty. Unfortunately, the reality is somewhat heart breaking. On the one hand, the government touted ‘unity’ whilst on the other imposed bans on Friday prayers and organised marches celebrating the assassination of ‘Umar (radiyAllāhu ‘anhu) whilst chanting anti-Sunni rhetoric. This is indeed beyond hypocritical.

Now before continuing, my articles have typically been accused of many things including how I make no mention of the crimes of Saudi Arabia. Firstly, it is clearly fallacious to use this to divert attention away from clear oppression elsewhere. Secondly, whilst I do not blindly defend Saudi Arabia, it does not throw up a false notion of unity whilst murdering and raping in the background. Saudi Arabic does not play the unity mantra one day, isolating and oppressing its minorities the other. Iran however, does, and this behaviour is becoming more evident than ever.

People seem to forget that there were many instances when Shias lived peacefully under Sunni rule, one example is the Caliphate of ‘Umar bin Abd al-Aziz, who ensured the peace and security of the Shias in Iraq. Indeed when he (may Allah have mercy on him) was informed of some troubles being stirred up by the Shia citizens of Kufa in Iraq, he simply directed lshaq bin Talhah bin Ash’ath[2] to speak to them and inform them of their wrongdoing, and to teach them what orthodox Islamic beliefs entailed. He issued no instruction to kill or oppress the Shias because of their views, as such punishments would only be carried out if the law was broken. He instructed:

The point here is not to let the media divert our attention from other matters in our Ummah, no doubt many of us were heartbroken seeing the King of Jordon crying at the rally in Paris whilst Syrian refugees are derided and mistreated in his kingdom, which goes to show where his priorities lie. No doubt the media is the window to the outer world, and if we allow it to get obstructed with a single issue, that is all we will perceive.

What took place during this so-called unity week shows that it was nothing more than mere politics, a farce of unity and a downright insult to Sunni Muslims everywhere. The regime will claim that Shias and Sunnis are equal, and indeed this is true only of those Sunnis that are willing to sell themselves to become a mouth piece or more appropriately a slave to the regime. However, if a Sunni wants an equal platform in politics, or simple rights to worship then he is labelled a Wahhabi, Takfiri, ‘Terrorist’ and all manner of other nonsense.

It is unfortunate that those who do not see the entire reality fall victim to this government ploy and are tricked into thinking that such tolerance in Iran actually exists. May Allah protect us all.

Very recently the so-called promoters of unity in Iran held a major festival celebrating the death of ‘Umar and praising his assassin who was a Persian fire worshipper by the name of Abu Lu’lu al Majusi. This shows, most evidently still how fundamental the concept of nationalism is in Iran and how it has converged with the Shia doctrine, creating a more Iranian nationalistic form of Shi’ism that is exported and adopted elsewhere across the globe. This festival of hate is known as ‘Umar Koshan’ which roughly translates to the killing of ‘Umar[3], with high ranking members of Iranian society reciting vulgar and explicit poetry containing insulting and grotesque sexual acts directed at him. Unfortunately, few heard about this as the media’s focus was on the French shootings. Another similar rally was held in the city of Qom where Sunni beliefs were slandered. And it was not without celebration of ‘Umar’s murder, Islam’s second Caliph and a man about whom the Prophet sala Allāhu ‘alayh wasalam said:

“If there was to have a Prophet after me, it would have been Umar bin Al-Khattāb.”[4]

Among Iran’s Sunni prisoners are those who are both psychologically ill and awaiting execution for “‘Moharabeh [enmity against God] through supporting Salafi groups;”[5] a very common charge against these prisoners of conscience, indeed demonstrating vividly this so-called ‘unity’. This ‘unity’ is particularly evident on one of these prisoners who has been beaten blue, while his family reports “bruising to his legs and that one of his teeth had been broken.”[6] Yes there are other regimes that are just as cruel, but Iran is the one that flaunts this farce of unity to the world, whilst torturing and executing its citizens in the background.

With the world’s attention set on the principle of ‘freedom of expression’, this is a new example of how Muslims’ right to express themselves has been limited. Similar to what was reported in the preceding ‘Muslims of China article, reports indicate that the Iranian government has been arresting many students for attending “Sunni religious schools in the Sistan-Baluchestan province.”[7] This is once again a clear example of this so-called unity.

Dear reader, let us strive to raise awareness of the suffering of those Muslims we leave unmentioned, such as our brothers and sisters in Iran, Burma, China, Ukraine and Congo among unfortunately many more regions. We as Muslims cannot merely be active, but we must be proactive and if we truly want to honour our dear prophet Mohammad sala Allāhu ‘alayhi wasalam, we must serve and be of benefit to his Ummah.

May Allah end the suffering of our Ummah and guide us all to the straight path. Āmīn.