How should we respond to the death of Mandela? 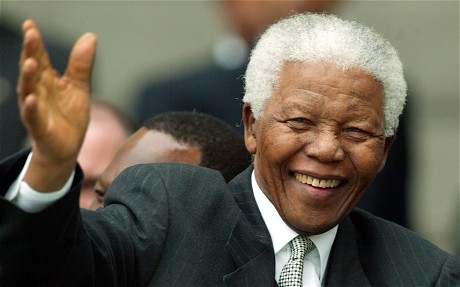 There can be no denying that the news of the death of Nelson Mandela has probably reached the homes of most parts of the world. He was an iconic figure, for that there can be no denying as well. Adulation and praise for his efforts and changes that he brought about are flooding the media and social media alike. Even the once upon a time haters of Mandela amongst western politicians have also joined the bandwagon of mourning his death and mentioning him with praise. The adulation for his achievements has transcended beyond race and religion alike and there should be no surprise if his name is never to be forgotten for the change and inspiration that he brought about.

As a Muslim community how should we respond to the death of such an iconic figure? The response to this issue is important since it touches upon the core fundamental beliefs of a Muslim and so, by the will of Allāh, this article will address key points that we should all be aware of.

“It is not for the Prophet and those who have believed to ask forgiveness for the polytheists, even if they were relatives, after it has become clear to them that they are companions of Hellfire.”[5][6]

Therefore one can conclude that acknowledging good traits of non-Muslims does not necessarily contravene one’s faith nor does it oppose the belief of al Walā’ wal Barā’.

This leads on the second important observation. A cursory scan of social media has shown that many Muslims have resorted to making statements that infer supplication or invocation for Mandela such as saying R.I.P (may he/she Rest in peace). It must be made clear that is not simply a statement of a reality i.e. that he is simply resting in peace, since we do not know what the state of the deceased is unless we are informed by revelation, rather it is a form of supplication where a person wishes or asks God to make the person rest in peace.

It is therefore not permissible for a believer to mention R.I.P after hearing the death of someone who died in a state other than Islam based upon the clear verse from Surah at-Tawbah v.113.

Imam an-Nawawi (Rahimahullah) said in his book about invocations: “Chapter: What a Muslim should say to a dhimmi [non-Muslim citizen] when he treats the Muslim kindly: Know that it is not permissible to make du’ā for him (i.e. the disbeliever) for forgiveness and the likes [7] of that which should not be said for the disbelievers. However, it is permissible to make du’ā for his guidance and general health since it was narrated in the book of Ibn Sunni that Anas (RadiAllahu ‘anhu) said: ‘The Prophet (Ṣallāhu ‘alayhi wa salam) requested some water from a Jew who then gave him the water. The Prophet (Ṣallāhu ‘alayhi wa salam) then said: “May Allāh (Subhanahu wa ta’ala) beautify your face.” It was said that that man never had any white hair until he died.” [8]

Some people might find the above points extremely insensitive, distasteful or even extreme, especially after the death of Mandela, however it is important that we do not allow our emotions to contravene our faith and its rulings. The topic of invocations and supplications is a serious matter in our faith to the extent that the Prophet (Ṣallāhu ‘alayhi wa salam) said: “Supplication is worship.”

The third point that needs to be raised is that a believer should always connect his thoughts and emotions to the afterlife, and so when he views the worldly life he looks through the lens of the afterlife and realises that true success lies in the success in the Afterlife. There is no true success unless that success leads to success with Allah, and thus Allāh (Subhanahu wa ta’ala) says: “It is the party of Allāh that are the successful ones.” [9] Anything less is only transient and will only have its benefit last for as long as the earth remains, which are only passing moments that will soon pass us by.

The believer who has the afterlife as his goal only sees success by achieving success in this world followed by success in the Afterlife:

“And those whose scales are heavy [with good deeds] – it is they who are the successful.” [10]

It is unanimously agreed though by all Muslim scholars that in order for our deeds to count in there Hereafter one must have faith in Islam:

“So whoever does righteous deeds while he is a believer – no denial will there be for his effort, and indeed We, of it, are recorders.” [11]

“But whoever desires the Hereafter and exerts the effort due to it while he is a believer – it is those whose effort is ever appreciated [by Allah].” [12]

“Say, [O Muhammad], “Shall we [believers] inform you of the greatest losers as to [their] deeds? [They are] those whose effort is lost in worldly life, while they think that they are doing well in work.” Those are the ones who disbelieve in the verses of their Lord and in [their] meeting Him, so their deeds have become worthless; and We will not assign to them on the Day of Resurrection any importance.” [13]

The biggest lesson we can learn from Mandela’s life is that no matter how much good you may do and achieve in this life, it will be to no avail if you choose not to believe in the greatest good; to dedicate your life to your creator and spend your life in submission to him.

Before concluding it has come to my attention that many people have been quoting an important ḥadīth out of context. It is only for the love of portraying the truth as it should be, are we seeking to correct this misunderstanding, and not simply for the sake of finding the faults of others. The ḥadīth is as follows: Sahl bin Hunaif and Qais bin Sa`d were sitting in the city of Al-Qādisiyyah. A funeral procession passed in front of them and they stood up. They were told that funeral procession was of one of the inhabitants of the land i.e. of a non-believer, under the protection of Muslims. They said, “A funeral procession passed in front of the Prophet (Ṣallāhu ‘alayhi wa salam) and he stood up. When he was told that it was the coffin of a Jew, he said, “Is it not a living being (soul)?”[15]

This narration has been cited by some to prove that showing deep respect and reverence for the deceased is something that is encouraged equally for the disbelievers and believers alike. That is not to say that they should be disrespected or treated unjustly, however, to cite this ḥadith to state that a disbeliever deserves this level of veneration is not accurate.

To clarify, the version of an-Nasā’i states: “A funeral passed by us and the Messenger of Allah stood up and we stood with him. I said: ‘O Messenger of Allah, it is a Jewish funeral.’ He said: ‘Death is something terrifying, so if you see a funeral, stand up,”‘ [16]

Likewise the version of Ibn Mājah states: “A funeral has passed by the Prophet (Ṣallāhu ‘alayhi wa salam) and he stood up and said: ‘Stand up out of recognition of the enormity of death.’” [17]

Likewise Badr ad-Dīn al ‘Ayni (Rahimahullah [d.855]) said regarding the saying: “Is it not a soul?” ‘He stood due to the difficulty and enormity of death and its remembrance. Thus if he stood up, it made his remembrance of death more affective.” [19]

Al Munāwi (Rahimahullah [d.1031h]) also stated: “He stood out of respect and honour for the one who took the soul or the angels of punishment that were present or due to the difficulty of death and its remembrance and not for the deceased himself. Therefore, his standing was due to the greatness of the matter of death and to honour the decision and command of Allāh.” [20]

Many scholars even said that the practice of standing up for the deceased has been abrogated since it was reported that the Prophet (Ṣallāhu ‘alayhi wa salam) sat down afterwards when other processions passed by him!

One further point that needs to be mentioned is that we as believers have no business in trying to determine the fate of any person in the hereafter. We believe that if a person died upon disbelief then he deserves eternity in the Hellfire. However, that is a general principle and cannot be used to state that particular individuals will be in the Hellfire unless we have revelation from Allāh regarding that person, like Abu Jahl. It is thus important to stress that it is for Allāh (Subhanahu wa ta’ala) to deal with these matters in the Afterlife. As for the believers, then they judge by what is apparent and treat people accordingly to that.

To conclude, it must be stressed that the purpose of this article was not to be pedantic about using the phrase R.I.P or about the use of the hadith about standing up for the deceased, rather the main point behind the article is that we as Muslims should have a holistic view towards matters and not restrict them to the worldly realm alone. Unfortunately, this narrow way of looking at matters has even managed to creep into the way we understand certain shar’i  based concepts such as Islamic political theory and other important concepts like maṣlaḥah (public welfare) and other matters. We can only formulate a sound understanding of the religion once we connect our understanding of all matters to the afterlife and allow our belief in the afterlife to guide us to how we think, behave and act.

[6] Note that although the verse above is from a Madani chapter of the Qur’ān and the death of Abū Ṭālib took place in Makkah, this does not make the use of the verse invalid to refer to the incident of the death of Abū Ṭālib since when scholars of tafsīr mention that verse xyz was revealed for xyz reason it can either mean that the verse was explicitly revealed for that particular reason or that the meaning of the verse applies to that particular incident. Hence, you will find most scholars of tafsīr refer to this incident to explain the meaning of the verse.

[7] Ibn ‘Alān commented on what he meant by ‘and the likes’ by saying: “such as asking for His mercy to descend on him or that he enters jannah or that Allāh be pleased with him.” Al Futūḥāt ar-Rabbāniyyah 6/262, Dār Iḥyā’ at-Turāth al ‘Arabi.