I refuse to wear a ‘Poppy Hijab’ 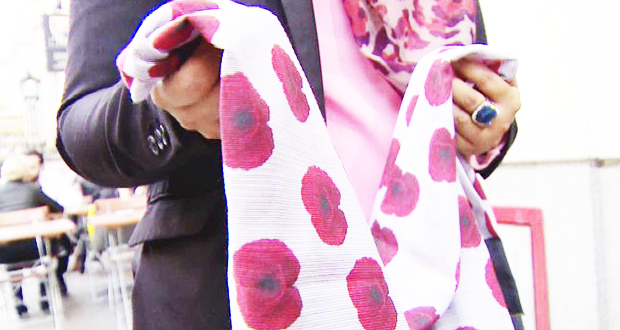 In the latest attempt at unabashed apologism, some Muslim groups have asked Muslim women to don a ‘Poppy Hijab’ in order to remember the Muslim soldiers that took part in the two world wars. The president of one organisation suggested that these hijabs would  “take attention away from extremists.“ [1] This latest gimmick has got to be the most ill-conceived of the recent spate of  “we are not extremists” initiatives.

Marketing the poppy as a stance against extremism suggests that refusing the symbol is tantamount to ‘extremism’. A great selling point right there. Buy a £22 hijab to prove that you’re not a terrorist, wannabe ‘jihadi bride’ – planning on running off to Syria to find your ISIS prince in blood-stained camouflage. It almost made me think I should buy one, it might make walking through security checks at airports a little easier. I could get on a train without being accosted by a fully uniformed soldier, drunkenly telling me he joined the army to “kill dirty Muslims”.

I also take issue with the fact that a symbol of my religion is being appropriated as a marketing tool for empire. My hijab is a visual sign of my religiosity and devotion to Allah and not a walking talking billboard on which to showcase my patriotism and undying loyalty to Britain. No other religious group is pressured to prove their allegiance in the same way. Somehow I don’t think we will be seeing a budding Jewish designer marketing a poppy kippa anytime soon.

Refusing to wear the poppy is not an ‘extremist Muslim’ stance; it is an ideological position based on anti-war sentiment. Nobody would accuse a white person of extremism for refusing to wear one. Every year we get the same old argument about the significance of the poppy. Some argue that the poppy does not represent war and patriotism but rather commemorates those servicemen who lost their lives in the world wars. Whilst many, non-Muslims and Muslims alike, choose not to wear the poppy because they feel it has been appropriated by politicians and warmongers to celebrate militarism.

There has been a noticeable push by the military, the government and some Muslim groups to tell Muslims in Britain about how our brave forefathers laid down their lives for this country; preaching that we should be thoroughly ashamed of ourselves for not sacrificing ourselves in a similar vein. After all, we have a long history of being used as cannon fodder by our imperial masters, why stop now? It must be the rise of ‘Radical Islam’, we have all become ‘radical extremists’. Our grandfathers didn’t have this ‘problem’. They were proud of their subservience!

I am a prime target for these initiatives, coming from a ‘Martial Race’ as I do. My great, great grandfather was awarded an ‘order of merit’ and given title of ‘Subedar Major’ for his ‘bravery’ during the first world war. However, the fact that he was probably fighting on the Mesopotamian campaign against the Muslim Ottoman empire, doesn’t exactly fill me with ecstatic pride. It actually makes me a bit nauseous to think about what ‘brave’ act he must have carried out to be given the highest military award in the land.

But it is my grandfather’s legacy that really makes me reject this idea that I should celebrate these men’s sacrifices. He was one of the 2.5 million Indian men that left British India to fight for the Allied powers during the second world war. Part of the Western Desert Campaign, he was stationed in Libya when he was captured by Italian forces in 1941, only to spend the next few years as a prisoner of war in German/Italian prison camps with none of his family aware of his whereabouts during the entire time. British Army officials in Delhi didn’t deem it necessary to provide them with any information. His family thought they were seeing a ghost when he walked back into the village nearly 5 years later.

Only a few decades after the war this man, who survived bombings, ground invasions and prison camps for the sake of Britain, arrived on these shores to be met with racial hostility and discrimination that he would have to endure until he went to his grave. He lived in the UK through the speech by Enoch Powell, and groups like the National Front telling him to “go back where he came from.” The sad fact is that our forefathers laid down their lives for this country and they were rewarded with nothing but humiliation and degradation. Things haven’t changed much, the rise of Islamophobia means their grandchildren and great grandchildren suffer new hues of abuse and negative stereotyping.

So forgive me for being a bit suspicious of this new found need to celebrate the legacy of Muslim soldiers in British wars. These men were never given the respect and honour they deserved when they were alive, so why pretend now? I see it for what it is, nothing but a cynical PR campaign to co-opt Muslim opposition to aggressive foreign policy. Perpetual war needs perpetual support and nationalism, which is perceived as somewhat lacking in the British Muslim community. The military and government hawks need to “win hearts and minds” and how better to do that than get us all walking around as human billboards advertising our undying support for war?

I don’t see an end to these types of conciliatory initiatives. What next? Why don’t I just take off my hijab full stop to prove the degree of my ‘integration’? Support every ill-conceived disastrous war that the elite establishment decides to join? Would that prove that I’m not dangerous? Maybe then I will be seen as being entitled to live here and given equal treatment.

My grandfather risked his life defending this country and was still shunned and told that he did not belong here. I will always be seen as the ‘other’ regardless of how much I try to fit in. That’s something that needs to be addressed by wider British society, it requires open debate and discussion — not gimmicks.

If there is one thing I am sure of, it is that given the British establishment’s never ending lust for war in Muslim lands, and the use of the poppy campaign to garner support and sympathy for the military, my grandfather and those countless other Muslim men who took part in the world wars would turn in their graves at the sight of their grandchildren wearing that hijab.

Sofia is an activist, writer and aspiring journalist. She currently resides in Manchester and works in the Health Care sector. She is the founder of Muslim Women Against Femen and #MuslimahPride. Find her on twitter @sofiaahmed1.

Sofia is an activist, writer and aspiring journalist. She currently resides in Manchester and works in the Health Care sector. She is the founder of Muslim Women Against Femen and #MuslimahPride. Find her on twitter @sofiaahmed1.