Tony Blair: The neocon threat to the world 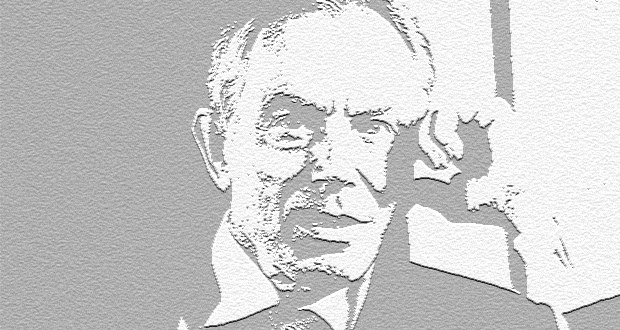 For Blair, the elephant in the room, Western foreign policy, has little to do with the violence in Iraq. The previously peacefully coexisting Sunnis and Shia are now, post-Iraq war, at each other’s throats.  Perhaps the incident of 19th September 2005 can shed some light on this. On this day two undercover British SAS operatives, dressed in traditional Arab garb, were planning to set off bombs in the main square in Basra, coinciding with a religious event. They were caught in the act, imprisoned and then broken out of the police station by the British army.

“By now, Shiites and Sunnis are the bitterest enemies, thanks to the sledgehammer wielded by Donald Rumsfeld and Dick Cheney […] and others like them who understand nothing beyond violence and terror and have helped to create conflicts that are now tearing the region to shreds.”

Of course, as Chomsky notes, the “sledgehammer” approach of the US has been used to destabilise other regions, from Afghanistan, Iraq and Libya to the resource rich Democratic Republic of Congo and the Prime Minister’s removal by the CIA and instatement of a corrupt, Western-friendly dictator.

No doubt Blair will conveniently ignore the fact that, worldwide, people regard the US and (in the EU) Israel as the greatest threat to global peace.

His links with Israel would inhibit such crude, anti-Muslim analysis of the dynamics about the Jewish.  In fact, he believes that Israel “in itself” cannot explain the turmoil in the region.  The religious nationalists and the settler movements have driven politics in Israel which manifests itself in the continued land grab.  As academic Clive Jones notes,

Such acts of extreme violence remain at the margin of Israeli society but equally,[1] they have resonance that questions Israel’s proud claim to be the only true manifestation of stable political pluralism in the contemporary Middle East […] for religious nationalists, the state exists to redeem land under a sacred covenant between God and Jewish people. Any attempt by the state to renege on this covenant strikes at the very core value system of some Jewish settlers.”[2]

Indeed there are currents amongst the Jewish whom desire a “Torah State”, free from the “corrupt, secular polity” so that the messianic era can be realised.[3]  According to Jones, it is Benjamin Netanyahu’s settler project which is keeping them placated. Israel Shahak, a holocaust survivor, continues,

“The main danger which Israel, as a ‘Jewish state’, poses to its own people, to other Jews and to its neighbours, is its ideologically motivated pursuit of territorial expansion and the inevitable series of wars resulting from this aim. The more Israel becomes Jewish or, as one says in Hebrew, the more it ‘returns to Judaism’ (a process which has been under way in Israel at least since 1967), the more its actual politics are guided by Jewish ideological considerations and less by rational ones […] the ideological defences of Israeli policies are usually based on Jewish religious beliefs or, in the case of secular Jews, on the ‘historical rights’ of the Jews, which derive from those beliefs and retain the dogmatic character of religious faith.”[4]

Zionist extremism was exhibited to tremendous effect in the latest barbarity in Gaza (2014). The lack of Western zeal to commit troops, “surgically strike” Israel’s infrastructure, instigate “regime change” and then combat the racist Zionist ideology and the rise of “Jewishism” is not Blair’s concern. The continued land grab which completely destroys the notion of a two state solution, and the attacks on the Al-Aqsa sanctuary continues to tug at the hearts of Muslims around the globe.

Indeed the present policy of supporting and arming the Kurds conveniently eschews the historically religious character of the Kurds, strengthened by the likes of Shaykh Ubeydullah (in 1880) of Nehri and later Shaykh Said (in 1925). Its transition to Marxist-Leninist ideology and later to a characterisation of “radical nationalism” under the leadership of Abdullah Ocalan between 1980 and 2000 also came with the use of terrorism. Should that matter now to the West as it props the PKK (a US/UK proscribed terrorist group) through the Pashmerga? Of course not, for the shifting allegiances are reflective of immoral neoconservatism which drives the foreign policy.  Divorcing “political knowledge” from “moral knowledge”, Irving Kristol approvingly quotes Machiavelli in the context of burning and plundering villages:

“for neither conscience nor shame ought to have any influence upon you […] those who obtain great power do so either by force or fraud, and having got them they conceal under some honest name the foulness of their deeds.”[5]

Whenever a people have resisted Western exploitation, they have been labelled derogatorily in order to marginalise them and justify an assault. The “Indian Musalmans” who resisted the occupation and resource exploitation of the British were labelled “Wahabists”, synonymising them to a rebellion movement (which revolted against the Ottomans) in the minds of the Indians and thus deprecating them.  For the British he was a stubborn rebel who did not waiver in the face of colonialism,

“The Wahabi of the nobler sort knows no fear for himself, and no pity for others. His path in life is clear, and neither warnings nor punishments can turn him to the right hand or the left.”[6]

And quoting E. C. Bayley, Secretary of State to the Government of India during the late 19th century,

“Is it any subject for wonder… that they [the Wahabis] have held aloof from a system which, however good in itself, made no concession to their prejudices, made in fact no provision for what they esteemed their necessities, and which was in its nature unavoidably antagonistic to their interests.”[7]

The people fighting the freedom struggle were, ironically mostly of the Hanafi school of thought, alongside Hindus and Sikhs. Similar strategies were employed in North Africa, where Islamic manifestation was associated with freedom movements thus resulting in policies such as the “unveiling” (both physically and culturally) of women to exact power in the houses of the colonised, thus positing man against woman, rupturing the household to French control.

What becomes apparent is whenever Western values, be they Christian-based or founded in secular liberalism of today’s rhetoric, have been rejected for being linked to resource ravaging and a distinct lack of freedom to practice the Islamic faith, from the private sphere of fasting and praying to the judicial and political capacity, a war has been waged to decimate, inter alia the financial infrastructure regardless of loss of innocent life.[8]  Thus, suicide bombing, a long time marker for terrorism, is positively reported when it is carried out by a female Kurd who happens to be fighting alongside the West in protecting Western interests.  And the Boko Haram remain the extremist of the extreme despite them negotiating and agreeing to release their 200 hostages (at stark odds with Blair’s declaration that “it is hard to envisage compromise with such people”).  At the same time, the West maintains the moral high-ground to declare war against “extremists”, despite engaging in practices which would shame the mafia: extraordinary renditions; secret torture prisons; Guantanamo Bay; detention for years without trial; and a policy to not negotiate with ISIS the release of their own citizens to the emotional destruction of the victims’ families, despite them demonstrating the willingness to release hostages. It is this hypocritical “force and fraud” which Blair seeks to “conceal” behind words of “honest” peace, justice and human rights.

Blair’s hidden hate of Islam becomes most apparent, despite the rhetoric of human rights, and despite the demarcation between “Islamism” and Islam, in the next article in this series.

[1] Such as drive by shootings by Jewish settlers.

[2] George G. Islamist Radicalisation in Europe and the Middle East: Reassessing the Causes of Terrorism, I. B. Tauris & Co: London, 2013, p.201

[8] Hallaq W.B., The Impossible State: Islam, Politics and Modernity’s Moral Predicament, Columbia University Press: New York, 2013, p.104, He writes, “The success can be measured by the indisputable fact that Islamic material civilization and Islamic regional and international commerce were among the most vibrant and prominent in premodern world history. This (perhaps understated) characterization is not only validated by what we know about Islam and its economic history but is also attested by the fact that European colonialism could not truly dominate Muslim lands during the nineteenth century without first dismantling the economic structures, and these structures depended on Sharʿī regulations, laws, and values to a significant extent. This is one important reason why the colonialist project insisted on rooting out the Sharīʿa, it having been an impediment to Europe’s political expansion and, far more importantly, economic domination.”