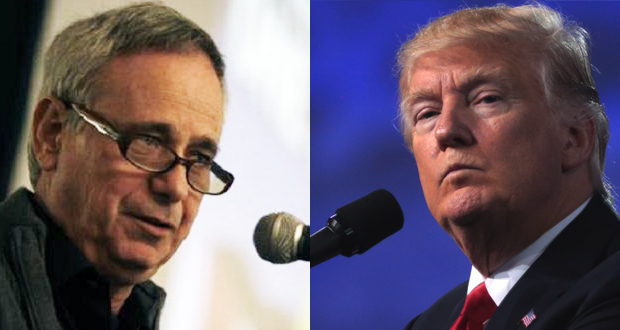 The renowned Israeli historian, Prof Ilan Pappé, writes in his first article for Islam21c that Trump’s Jerusalem announcement has set off a chain reaction of events that could finally lead to a positive outcome for Palestinians…

President Trump’s declaration of Jerusalem as Israel’s capital and his pledge to move the US embassy to Jerusalem were condemned by many Western leaders as an unfortunate derailment of the peace process. Truth to be told, there is no peace process that can be derailed, although the declaration and the pledge would make it even more difficult in the future to bring it back on track. If there were doubts of the bias of American mediation in the past, it is quite clear that  future American administrations would find it nearly impossible to be recognised as honest brokers.

The damage of the declaration and the pledge lie elsewhere. Ever since 1948, the recognition of the special status of Jerusalem was the single principle adhered to by the international community: not just verbally but also in practice. This  unique position can be compared to the international stance on the illegality of the Jewish settlements in the occupied territories or of the inalienable rights of the Palestinian refugees to return home. In these two cases the moral position has never been followed by action on the ground.

Jerusalem is a different matter.  It was recognized as a corpus separatum, an international enclave, in the UN partition resolution 181 from 29 November 1947.  This was followed by a series of UN resolutions, including resolution 194 from 11 of December 1948 that expressed once more the international commitment to the international status of the city. Among the strong supporters of this UN stance was the USA.  The Israeli government reacted by locating firmly all its public institutions (government, Knesset and the Supreme High Court) in Jerusalem declaring it the eternal capital of the Jewish people.

The UN condemned this move and consequently since 1949, hardly any member state of the organization dared to open an embassy in the city. This was quite an exceptional achievement. From the moment the UN deliberated the future of Palestine in February 1947 and until the end of the British Mandate in May 1948, the organization, and by extension the international community, accepted unconditionally every moral Zionist argument and every chapter in the Israeli Jewish narrative.

While the Zionist claim to the land and statehood were recognised, the argument that the city was Jewish for more than 3000 years did not seem to convince even the traditionally pro-Zionist member states of the organization. Christians and Muslims felt, one should say rightly, that their attachment to the city is as strong as the Jewish one. The UN at the time did not recognise the Palestinian right to a city in which Palestinians lived for hundreds of years and which their political, cultural and economic elite ran in the name of the Ottoman Empire for four hundred years. Even if one accepts that the Hebrew tribes of biblical times, which according to the old testament had more than one capital, are the original Jewish nation state, their rule in Jerusalem in the last 3500 years was very brief compared to other local and foreign rule in the city.

Until 1967, this international position ignored the rights of the Palestinians to the city (who lived in both sides of the city until 1948, before they were expelled from its western side during the Nakba). This recognition came later, after the June 1967 war.

Immediately after that war, the government of Israel announced the official annexation of the occupied eastern parts of the city. The announcement was followed by ethnically cleansing part of the Palestinian population, expropriation of land and by vast projects of colonization. Post-1967 Israel continued to ignore the international law and public opinion as well as a clear American condemnation of this annexation as a violation international law. This did not dissuade the Israelis from continuing the annexation and dispossession, expanding what they called greater Jerusalem over a space that nowadays stretches over nearly one third of the West Bank. An annexation that incorporated hundreds of thousands of Palestinians into an area which became officially part of Israel and theoretically could have changed the demographic balance of power within the Jewish State. However, this was avoided by an incremental transfer of Palestinians from the area and excluding heavily populated Palestinian areas within greater Jerusalem by defining them part of the West Bank.

The failure of the Oslo peace process did not change the international position on both the status of Jerusalem as the capital of Israel and the need to determine its final status by considering the Palestinian right to have a capital there as well. The facts established on the ground made it difficult to see where such a Palestinian capital could be (the Americans and the ‘peace camp’ in Israel suggested locating it in a village on the eastern outskirts of the city, Abu Dis). Nonetheless, there was some hope for the Palestinians that their rights to the city were at least ensured by the clear international recognition that the Israeli actions since 1948 were a blatant violation of the international law.

A declaration by an American president that legitimizes these violations as if he or his county are above international law, has several implications and possible consequences. It could be as mentioned, the swan song of a long, dismal and disastrous chapter of American mediation in the Palestine question. This by itself may prove in the future not a bad thing, provided there will be a willingness to rethink the basic assumptions of what should be the nature of these negotiations. It could, and maybe should, lead to rethinking the validity and relevance of the two states solution and give more serious consideration to the various models of a one state solution.

More importantly and urgently, this last American move demonstrates once more what is really needed at this time from the international community if it wishes to play a constructive role in Palestine, and by extension in the Arab world as a whole. What is needed now is not another futile attempt to put the ‘peace process’ back on the tracks, but a recognition that only powerful pressure on Israel would prevent the further dispossession of the Palestinians. The daily implementation of this Israeli policy, not only in Jerusalem, the West Bank and the Gaza Strip, but also in Israel proper, is the main reason a third uprising can break out at any given moment; an uprising that could throw the area into a chaos at a time when there are serious efforts to heal the open wounds of the foreign occupation and civil wars of the last six years. The Trump declaration can be the match that ignites it on the one hand, but can also be an eye opener leading for a new approach to ongoing Palestinian catastrophe.

Ilan Pappé is an expatriate Israeli historian and socialist activist. He is a professor with the College of Social Sciences and International Studies at the University of Exeter in the United Kingdom, director of the university’s European Centre for Palestine Studies, and co-director of the Exeter Centre for Ethno-Political Studies. He is the author of The Ethnic Cleansing of Palestine (2006), The Modern Middle East (2005), A History of Modern Palestine: One Land, Two Peoples (2003), and Britain and the Arab-Israeli Conflict (1988).