Is David Cameron OK with “an” Islamic State then? 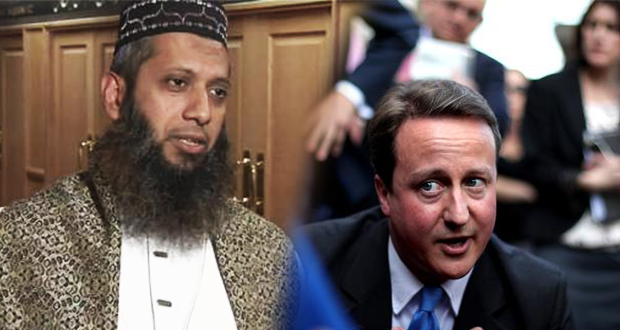 On Wednesday 20 April 2016, David Cameron defamed Imām Sulaiman Ghani from Tooting at Prime Minister’s Questions as an “IS supporter” – a popular acronym for ISIS.[1] Downing Street’s Press Office later clarified that Mr Cameron really meant Imām Ghani supported “an” Islamic state.[2] The basis of this claim, Downing Street argued, was the ‘Quiz a Muslim’ event, that I personally chaired in my hometown of Bedford, last November.[3]

However, it was only in January this year when Mr Ghani spoke at an anti-ISIS conference entitled “The Evils of ISIS”.[4] Mr Cameron’s defamatory and irresponsible accusation escaped an imminent lawsuit due to his parliamentary privilege.

Nevertheless, this did not stop Defence Secretary, Michael Fallon, from repeating the lie on a radio interview when Labour’s Sadiq Khan won the London mayoral elections.[5] He went a step further, describing Imām Ghani as a supporter of “Daesh”; the Arabic acronym for ISIS.

Led by the lifelong Tory supporter and journalist Peter Oborne,[6] and LBC’s Political Editor Theo Usherwood,[7] an uncompromising campaign demanding Cameron to apologise to Imām Ghani was underway. It was only after Imām Ghani proceeded with legal action that Defence Secretary Fallon apologised for his “inadvertent error”. Hours later on Wednesday evening, Downing Street issued an unapologetic “apology” to the Imām, stating,

I get the feeling this swift “apology” was a high priority for Mr Cameron in setting a precedence to prevent other Tory politicians from repeating the lie without parliamentary privilege, leaving them open to legal action.

Is “an” Islamic state ok, then?

Beyond the stress and fear that Imām Ghani and his family have experienced over the past few weeks, the “IS supporter” slur has exposed a much wider problem, with serious implications for British Muslims.

The manufactured conflation between ISIS and the normative Islamic concept of a caliphate or an Islamic state proper, has been a yardstick, which has been repeatedly used by the media and politicians to beat Muslims with. Initially, it appeared, and pretty much still appears, that the government considers supporting the terrorist organisation ISIS, and desiring the unification of Muslim majority lands via peaceful means under a single ruler as the same thing – an unacceptable extremist belief.

However, it is conveniently brushed under the carpet that the historical caliphate, under numerous dynasties, made up thirteen centuries of Islamic history and heritage. Ultimately, this is an institution that is enshrined in Islamic theology, mentioned in Quranic verses and numerous Prophetic statements (ḥadīth), and agreed upon by all mainstream schools of Islamic jurisprudence.

Such a unanimous consensus has been confirmed explicitly by the likes of Imāms al-Qurtubi (Māliki),[9] al-Buhūti (Hanbali),[10] al-Haskafi (Hanafi),[11] al-Māwardi (Shāfi’i),[12] Ibn Hazm (Dhāhiri),[13] and Ibn Taymiya (Hanbali),[14] to name but a few. The Andulusian jurist Ibn Hazm even went so far as to state that only people to take exception to this consensus was an obscure minority from amongst the Khārijites.[15]

The announcement of the re-establishment of the caliphate by ISIS in June 2014, despite being rejected by Muslims everywhere, was a dream come true for some western governments. Now they had, at last, found a “medieval” entity that would justify the continuation of their destructive foreign policy campaigns in the Middle East.

What this latest saga with Imām Ghani and the Tory leadership has proven is something that has been well-known within the Muslim community for nearly 15 years; any non-violent politicised and orthodox conception of Islām is becoming increasingly unacceptable. The McCarthyite witch-hunt of Muslim figures, and the “muscular” approach to Muslim assimilation to secular liberalism is no longer a secret, as witnessed in recent weeks.

However, let the Defence Secretary and Prime Minister’s half-hearted “apology” be a lesson learnt for politicians and journalists alike, who frequently smear Muslim scholars and activists by conflating “support for ISIS” with the belief in a Caliphate. Consequently, now that the leader of this country has reluctantly distinguished between the two, will Whitehall acknowledge this in their legal definition of “extremism” in preparation for Cameron’s Queen Speech on May 18, when new measures under the Counter-Extremism Bill will be announced? I very much hope so. Otherwise people like Michael Gove may as well smear Cameron as an extremist for appearing to show some nuance.[16]