Jerusalem Fiasco: a Wake-up Call for an Ummah in Slumber 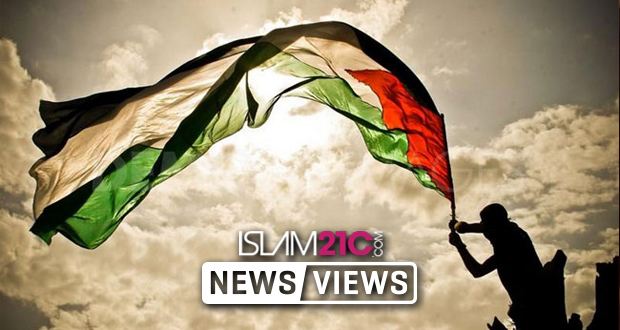 It was Mandela who said “We know too well that our freedom is incomplete without the freedom of the Palestinians”. It is for precisely this reason that both Palestine and Jerusalem have been pricking at the conscience of the world at large. The good news, then, is that the Trump-Bibi comical drama/conspiracy to change the status of Jerusalem and resolve the Palestinian conflict on their terms, is being laughed off according to the overriding world opinion including the UN and the EU.

It is true that Trump made the so-called ‘historic’ announcement while Netanyahu and the Pro-Zionist Media applauded. However, it is naïve to think that there was a surprise element in the US stance, coming from the demagogue and narcissist Trump, alongside the ground realities in Jerusalem with the backdrop of the dismal record of US Exceptionalism particularly since the end of the Cold-war. Thinker Tariq Ramadan was perhaps right when he wrote,

‘[The] reality on the ground is that Jerusalem is de facto the capital of Israel. The Western side is already annexed while The East of the city is slowly colonized. Day after day. Donald Trump simply puts audible words to an agreed silent policy. .. Was it not the same policy that was promoted by Clinton’s previous American administrations to Bush, and Obama. … With words less? … President Trump will enter history. … Not, however, like the one who defended dignity and justice for the oppressed, but because he wrote paradoxically the first chapter of the defeat of the coloniser and the oppressor’[1].

Thus, this announcement should be received, not with surprise but as another slap in the face of the Muslim Ummah, engrossed in a deep state of slumber. However, whether the Ummah will choose to wake up and act depends on whether it is actually asleep or just feigning sleep.

Israel passed the “Jerusalem Law” in 1980, stating that “Jerusalem, complete and united, is the capital of Israel”, thereby formalising its annexation of East Jerusalem. In response, the UN Security Council passed Resolution 478 in 1980, declaring the law “null and void”, as it violated several principles under international law and thus East Jerusalem was regarded as occupied territory. This was with the exception of the US and Russia, the latter which announced its recognition of West Jerusalem as the capital of Israel, and East Jerusalem as “the capital of the future Palestinian state”. Despite this, since 1967, Israel has built a multitude of illegal settlements, some in the middle of Palestinian neighbourhoods in East Jerusalem.  Although Israel continues to claim that Jerusalem as its undivided capital, the reality is that Palestinians are living there under apartheid-like conditions, while Israelis enjoy a sense of normality, guaranteed for them by their state.

This being the stark reality in the Zionist occupied territories, it was however despicable that the U.S. routinely exercised its influence to save the perpetrator Israel from international sanctions and scuttled the course of justice due the Palestinian victims. As Ambassador Chas W. Freeman, in The Hisham B. Sharabi Memorial Lecture, states:

‘Repeated American vetoes on behalf of Israel have reduced the UN and other international fora to impotence on fundamental questions of justice and human dignity. Confidence in these institutions has largely disappeared. Thus, the Israel-Palestine dispute has shaped a world in which both the rule of law and the means by which it might be realized have been deliberately degraded. The inability of the US to build on the obvious shared interests of Palestinians and Israelis is, at best, damning testimony to the incompetence of those Americans who have made a career of processing peace without ever delivering it.’[2]

Therefore, to be quite honest, the US has never ever been an honest broker or taken genuine measures to ensure the Palestinian people are given their historic right to their own homeland usurped by US’ Zionist agent in the Middle Eastern region. Simply put, the US cannot act as an honest broker whilst simultaneously aligning itself with and serving as Israel’s strongest ally. American double standards and hypocrisy on matters related to the Israel-Palestine conflict account for much of the recent decline in international admiration and deference to U.S. leadership in the Middle East and elsewhere. Expecting Trump, with his narcissist frame of mind, to do so is both incomprehensible and irrational. With perceived double standards and hypocrisy in matters related to the Israel-Palestine conflict, the US has proven incapable of creating strategic circumstances conducive to serious negotiations between the warring parties in the Holy Land.

The good news is that, given the protracted failure of U.S. diplomacy in the Israel-Palestine arena, others in Europe – including the UK – have taken alarmed note of the adverse effects of the unending conflict on Israel, on the Palestinians, and on world order. Even media outlets outside the US have taken a progressively more balanced and nuanced note of the human suffering in that area of conflict. Grassroots activism on behalf of the Palestinians is also gaining momentum. In this context, there is still renewed hope, even after 100 years of the Balfour Declaration. It will be up to the Muslim world to act as facilitators to the build-up of this alliance to bring justice to the people of Palestine suffering under the Zionist boots.

Sadly, there are mixed signals from the Arab and Muslim world. The Arab League, reacting to Trump’s decision to recognise Jerusalem as Israel’s capital, called it a “dangerous violation of international law” that had no legal impact and was “void”. Interestingly, their criticism of Trump’s plan contrasted sharply with the praise the United States’ traditional Arab allies in the Gulf region showered on Trump at the beginning of his presidency. However, it is doubtful how much of this rhetoric will be translated into tangible action. In the past there have been reports of internal manoeuvres and undercurrents among some Arab leaders demanding the Palestinians support Trump’s vision for peace with Israel, on terms and conditions more tilted toward the Israelis than ever suggested in past presidencies that no Palestinian leader could ever accept. The Arab League’s final statement too conveniently ignored any concrete action even after Lebanon’s foreign minister called for economic sanctions against the US move.

Meanwhile in Istanbul, at the emergency meeting of the Organisation of Islamic Cooperation (OIC), there was a greater resolve demonstrated when the OIC rejected the US stance as “dangerous”, declared East Jerusalem as the capital of Palestine, and called on the international community to follow suit. They also called on the UN to “end the Israeli occupation” of Palestine and declared Trump’s administration liable for “all the consequences of not retracting from this illegal decision”.[3] The OIC should now go beyond its past limitations and internal politics to unify and showcase the global Muslim voice. It is imperative they follow through on their laudable resolutions by utilising the renewed goodwill for the Palestinian cause.

“This new reality is also compelling the PLO to change their strategies, and undertake reforms through consultations inside Palestine and with Arab countries, as well as all Muslim nations in the world. Further, plans are afoot too, to take Israel to the ICC in a bid to bring Israel to account and curb Israeli violations as well as for Palestinians to join international conventions, while clamouring afresh for the recognition of the Palestinian state as a full member of the U.N. with Jerusalem as its capital, with international support.”[4]

Only the Palestinians (PLO and Hamas) can make the decisions necessary to achieve their aspirations and the leadership of the Muslim world should be the active facilitators in the process, without confining to statements and laudable rhetoric. The Muslim Ummah has a special place in their hearts for al-Quds and Palestine and therefore they expect nothing less.