Lets Leave Innocent Children Out of This, Boris 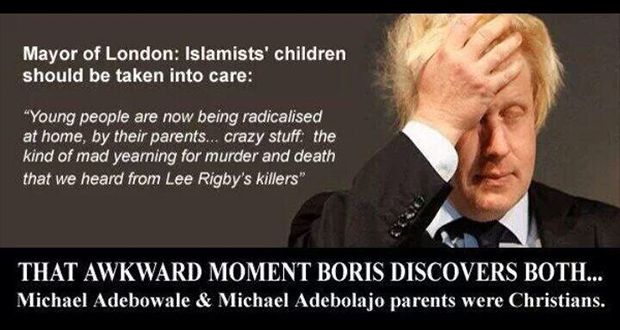 Earlier this week, the mayor of London, Mr Boris Johnson, hit headlines by proposing that the children of ‘Radical’ Muslims should be taken into care.  In his weekly Daily Telegraph column he equated radicalisation to a form of child abuse, stating that some children were being “taught crazy stuff” such as the men accused of killing Fusilier Lee Rigby[1].

For the Muslim community however, this is not seen as a resolve for radicalism at all, nor is their response a defence for “potential killers or suicide bombers”.  Muslims at large do not affiliate with what was seen as a horrific act of madness, just as the average white non-Muslim would not affiliate with the swathes of sex offenders and serial killers from “their community”. However, at the same time, Muslims cannot accept the creation of vague laws that could lead to more harm than good.  For many it is seen as a way to silence Muslims and to banish political opposition by threatening to remove the Muslim family’s dearest possession – the children.

With little (if any) academic evidence linking radicalism to the family, Boris should be well aware that both killers of Mr Rigby were born to devout Christian families.  As for most other convicted terrorists, then they are typically anomalies amongst their families and the Muslim community at large.  Laws such as those proposed by Mr Johnson would not tackle the real potential for radicalism, rather, they would set to penalise parents through their children.

‘Radical parents’ is an extremely vague term and ensuring that such a law is used sensibly would be almost impossible. Ask Mr Tony Blair, would a Muslim parent opposing his attack on Iraq be radical in his eyes? Could parents be penalised for discussing illegal settlements in Israel or including their children in prayers for those suffering in Syria? How about sending £200 to buy a generator for a poor Syrian family or providing aerobics advice as Moazzam Begg was ridiculously charged for[2]?

Consistent Islām-hate by the media and Government over the last decade has pre-conditioned the average person to believe that Islām is radical. Harmless Islamic practices such as halal meat, gender segregation or the veil, to mention a few, have recently made headlines and been unfairly represented as radical threats to British culture. Perhaps it is the new British culture and its muscular liberalism that has taken radical turns away from what all the Abrahamic faiths came to teach.

Muslims are tired of having their faith put in the boxing ring and for simple religious beliefs and practices to be misconstrued and mocked. If, however, such distortions lead to their family being torn apart, then it is fair to say that enough is enough so please leave the innocent children out of this.

Surely, if such a proposal was truly for the child’s interest, it would not be directed at Muslims alone but would be inclusive of hate groups such as EDL and BNP. The Muslim community is constantly tackling racial abuse and hatred inherent in such parties and largely perpetrated upon their youth. A number of EDL youths have been arrested for violence against Muslims or Mosques and children as young as 5 years of age have expressed hatred of Islām. In such cases, surely it is the parents to blame for indoctrinating hate that has resulted in numerous cases of actual bodily harm or destructive attacks on places of worship.  Terrorism amongst white, far right youth is a far bigger reality, and if left alone they are at greater risk of becoming ‘potential killers’. The only reason we as a society are unaware of this is due to the blatant, disproportionate representation of crimes committed by minorities; no one gets to the dull, understated bulletins about white terrorists tucked away in discrete columns on newspapers and websites[3], even if they do commit or attempt to commit crimes of monumental viciousness.

In a response to whether this proposal would be applied to the BNP too, Boris states, “If that child is being taught to want to commit crime, or be full of hate, then I imagine you might contemplate such a thing.”[4] Why contemplate it as an exception on one side Boris, and allow its use with every vague boundary on another? Pure hypocrisy and evidence that the wellbeing of children has sadly been dismissed.

It is our greater interest as Muslims to ensure that children are raised in healthy and safe environments.  Muslims do not oppose laws made for the greater interest of children but very little about Boris’ proposal suggests that he shares the same concern. Threatening Muslims alone and redefining what Muslims can and can’t teach their children is simply an unwarranted tool to silence them in hope that it will dissolve their beliefs. Perhaps the concept is too intellectual for the likes of Mr Johnson, but it is needless to say that terrorism typically results from frustration, oppression, injustice and many global policies that the West has contributed towards. A little research into the facts around Lee Rigby’s killer and his rant after his crime would have easily revealed so. Let’s be more genuine in approaching this issue, Mr Johnson, and in our mutual search for justice, let’s leave the innocent children out of this.