The Struggle for Justice #ReleaseMoazzam 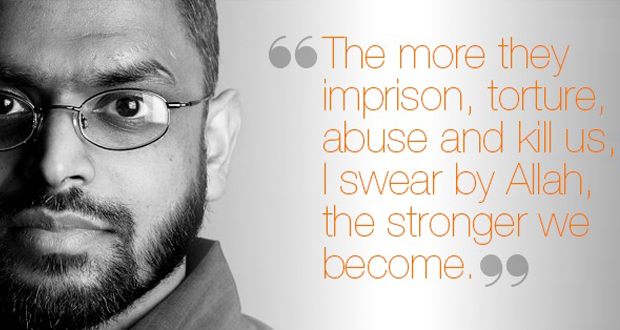 “The struggle for reason and justice is clearly a longer one than I once imagined.” Moazzam Begg.

The concept of struggle is something in Islām which is very clear; struggle and difficulty enveloped in ease – everything we endure is through His Will and everything that approaches us only does so through His Permission. Now, as I write on in this piece the struggle Muslims are undertaking throughout the world is not something to be consumed by or be entirely afraid of but a reminder to act and strive for justice.

Those of us watching, reading or possibly writing the news, may have seen Peter Bouckaert of Human Rights Watch last week. Situated at the heart of the crisis in Bangui he made a plea, telling the world “There will be no Muslims left in the Central African Republic” should the violence continue in the region. An outright call of physical warfare against 1.25 million Muslims with the announcement of the killing of at least 2,000 people in the recent spat of violence. Muslims being burned, lynched and abused to inconceivable extremes; a humiliating and degrading state where Muslims are fleeing for their lives, on their journeys fearing attack. Their crime? Being Muslim.

But the world is watching on as what Amnesty International have called ethnic religious genocide takes place.

This type of warfare is that which is physical—the spilling of blood, the loss of life. A type of attack I’ve seen and read about but not one I’ve yet experienced. Warfare I can see, but not one we in Britain can completely comprehend, warfare we can feel pain for, but not one that we can completely understand, my understanding of warfare against my practice of Islām is one that is far more psychological and I believe this is the case for most in the western world.

Here in Britain we are no strangers to attack. Last week I reported on the Legoland drama, the one purported by the Daily Mail attacking British Muslims. The piece put young, old, men, women, children, virgins, all under an umbrella of hate, leaving no one out of the mix – all of this coming together to form the most bigoted piece of British print I have ever had the misfortune to read. The sole objective of such a piece could only have been the demonisation of Muslims, fuelling an already growing anti-Islamic narrative, promoting a climate of fear and intimidation – fear of the other and for those of us who are the other – a fear to be a part of this collective, a fear to practise Islām. Children’s theme park Legoland were at the centre of this particular article, the centre of attention for simply hosting a ‘Family Funday’ organised by the Muslim Development and Research Foundation (MRDF). As a result of death threats and violence from right wing groups, all directed at visitors to the event, Legoland staff and MRDF, the park subsequently cancelled the event, a day if but anything was a very ‘British’ day out in the sun. The Mail’s justification and reasoning for their piece: satire!

On Friday a bill to ban the niqāb in public places had a second reading in parliament. Muslim women wearing a face veil seem to be causing such a security threat in Britain that they have become a societal burden to other citizens, they’re supposedly causing such discomfort that they should be targeted and removed of their right to dress as they please.

The case is now of Moazzam Begg, a man whose name is almost eponymous to injustice, being arrested and now charged, associated once again with the T-word. The charge: providing terrorist training and funding terrorism overseas.

Moazzam’s arrest is centred on his 2012 trip to Syria, one authorities were well aware of at the time. During his trip to Syria, Moazzam says he “met numerous former prisoners who had been held by the Assad regime” and “spent much time accumulating testimony and information for a report on the situation of the current prisoners,”[1] a report that is soon to be published by CAGE. He visited refugee camps and witnessed the delivery of aid. Moazzam hasn’t hidden that he also met some rebel fighters during his travels. Is this a crime?

CAGE – formally known as Cage Prisoners, the Human rights and advocacy group Moazzam helped set up after his tenure in Guantanamo, have said that his arrest is designed to ensure that any travel to Syria is deemed suspicious, adding that a “concerted campaign of harassment against Muslim individuals and charities involved in providing humanitarian aid to the victims of the Syrian crisis” is what’s really taking place[2].

The man tortured and abused in Guantanamo Bay, held there for three years without due process, without any evidence having ever emerged against him to assume he was ever linked to terrorism, has once again been attributed the label of terror.

Campaigning for human rights, Moazzam embodies courageousness and is a man of action; fighting for those suffering from injustice despite the mental scars he has suffered himself.  A husband, a father and an activist who’s not sunk into the pits of security after his release, but a man who questioned, picked and prodded at the perpetrators of crimes, a man fierce with valour and humble in his speech, fighting for the rights of others. It is because of his distinguished and selfless qualities he has become such a target, as journalist Glenn Greenwald has called Begg “one of the West’s most prominent Muslim war on terror critics”[3].

Across borders and shores are we being caged into sides of a fight and is Moazzam’s case to set but an example.

“This is a politically motivated arrest and very much bears the hallmarks of trying to criminalise legitimate Muslim activity by reinforcing a climate of fear.[4]” Asim Qureshi, CAGE Research Director.

Whatever the intention behind these activities and the cross-border narratives at play, the immediate result is that of intimidation and a vilification of British Muslims.

Dress code, travel, activism, even how to and how not to have fun – an attack on the practising of Islām. The intentional irresponsibility of the media whose rhetoric inflames tensions between communities and assists in the forming of an atmosphere of suspicion, the different bodies at play, must be held to account. Whatever the battle, it is in our fitrah to seek justice and that is what we must strive to be doing.  We take it as a good sign that the moments after the display of unity and camaraderie of the Muslims and wider community in the form of the ReleaseMoazzam campaign, the likes of Boris Johnson have attempted to throw us off track by threats as ridiculous as taking away the children of “extremists” by the state[5]!

As I quoted in the beginning of this piece, Moazzam Begg said not too long ago “The struggle for reason and justice is clearly a longer one than I once imagined,” but since our aim is a good and just one, I do not believe our detractors will succeed.