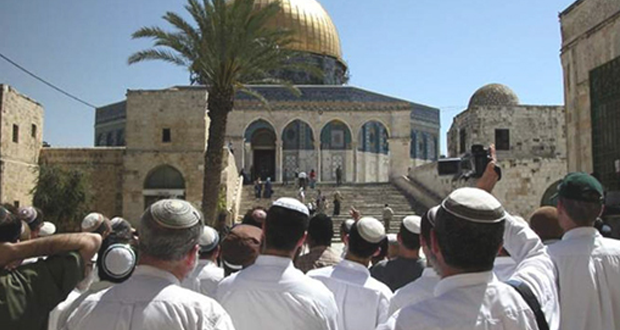 “Glorified be He (Allāh) Who took His slave (Muhammad salla Allāhu ‘alayh wasalam) for a journey by night from al-Masjid al-Harām (at Makkah) to Al-Masjid-al-Aqsa (in Jerusalem), the neighbourhood whereof We have blessed, in order that We might show him of Our signs. Verily, He is the All-Hearer, the All-Seer.”[1]

Few of us stop to ponder over the circumstance this blessed chapter was revealed in and the implications of the Prophet’s great journey (salla Allāhu ‘alayh wasalam). This chapter, having been revealed in Makkah contains topics that are inherent to Islamic ‘Aqīdah, central to our focus and concern. The gathering of every Prophet in al-Aqsa Mosque, led by the final Messenger (salla Allāhu ’alayhi wasalam) indicates his position as their great Imam and leader[2]. It signifies the relationship between their messages and emphasises the final divine designation of the land to the monotheistic nation of the descendant of Ibrahim (‘alayhi al-Salām): Muhammad, (salla Allāhu ‘alayh wasalam)[3].

It therefore becomes extremely painful that we need to discuss the identity of an area that exemplifies the very core of Islamic belief. This is more and more typically becoming the Israeli Parliament’s main point of debate in its quarters; extending its authority in Jerusalem to encompass al-Aqsa Sanctuary in replacement of Jordan. The latest episode of this Zionist fanaticism was led by Moshe Feiglin, a Jewish extremist member of Prime Minister Benjamin Netanyahu’s far right Likud party. Unsatisfied with the current level of Israeli annexation of Palestinian land, Feiglin expressed resentment at why Israeli fanatics have no access to the sanctuary and are barred from unfurling on it the Israeli flag[4].

According to Feiglin: “Al-Aqsa belongs to the Jews and the Arabs should go back to Saudi Arabia where they belong. The golden dome is part of a Jewish temple and does not belong to the Muslims.”[5] These claims have already been proven fictitious from religious, historical and geological grounds. Israeli and international archaeologists have been excavating tunnels under the Aqsa sanctuary extensively since 1967, confirming through rigorous exploration that claims to a Jewish temple in that area are baseless[6]. These fabrications have nonetheless led to significant damage to the structural integrity of al-Aqsa mosque, causing walls to crack, floors to cave in and others to completely give way[7]. Demands for sovereignty over the Mosque, however, are not purely driven by the dreams of ‘extremist Zionists’, they are the stepping stone to something more catastrophic. These demands should never be deemed in isolation of the surrounding, concurrent events in the Muslim world. As the Muslim world continues in turmoil Israel is pushing forth in the dark, realising its ambitions of uprooting and replacing what remains of Islamic endowments in the holy land. These simultaneous events have largely diverted the attention of Muslims around the world, allowing the Zionist regime to double its rate of settlement expansion in 2013 while demolishing 390 Palestinian homes in the West bank in the same year[8], 50% more than in the previous year amidst no international resistance[9].

On Wednesday the 19th of February, extremist Moshe Feiglin “ascended to the Temple Mount” and “toured all corners”,[10] provocatively offering a ‘prayer’ in claim of al-Aqsa sanctuary and by full sanction of Israeli police. In essence, Feiglin’s action while a member of the Israeli Knesset does not differ to when Ariel Sharon desecrated the holy sanctuary by intruding into it surrounded by hundreds of Israeli police. This symbolic attempt at declaring ownership to the sanctuary sparked the second Intifada, claiming around 5,500 Palestinian lives[11]. More recently, repercussions to Israel’s debate on formal ownership has been lent dangerously less attention, besides the Jordanian Parliament’s useless unanimity on expelling the Israeli Ambassador[12]. The Zionist regime, in fact, effectively controls access to the Mosque and persists in banning anyone under the age of 50 from entering it, all the while radical Jewish settlers storm the Mosque unimpeded[13].

The almost unconscious ‘Palestinian President’ Mahmoud Abbas and his negotiation team continue to demonstrate the pinnacle of naivety and absurdness in continuing negotiations, supposedly attempting to secure East Jerusalem as the capital of Palestine as opposed to Beit Hanina[14]. Geopolitically, these negotiations are foolish as the Palestinian Authority is frail and ineffectual on the ground. As such, its presence as the main ‘authority’ is to the betterment of Israel. Evidence of this is its threats to disband itself if Israel continues in its settlement expansion in East Jerusalem (imagine if Hamas did the same). With more than 53,000 settlement homes in East Jerusalem[15], prospects for a state through negotiation have been eradicated. Religiously, Jerusalem being an endowment renders any negotiation over its ownership void and as thus “bargaining over Palestine means bargaining over our faith.”[16]

The Zionist entity is actively utilising the events across the Muslim world to swiftly achieve its expansionist goals. Out of the spotlight, it is pressing forward in an attempt to uproot al-Aqsa while the Palestinians struggle to defend this collective endowment all alone. Israel is not oblivious to the impending danger in the Middle-East and understands that bringing its invasion to an end is in the scope and objective of some of its neighbours. Nonetheless, allowing oneself to be preoccupied by the means while disregarding the objective (the end) will lend Israel time to cause the objective to become more and more unreachable. Indeed the destruction of al-Aqsa, God forbid, is something that will cause the zeal and energy of many Muslims to fetter, even in making progress in the means. Keeping awareness and full recognition of the position of al-Aqsa, while embodying it like one embodies elements of his or her creed is vital for every Muslim. Every effort should be expended in defending it, emphasising its sanctity and embedding its status in the heart in this challenging time.

[3] Sayyid Qutub, in the Shade of the Qur’ān, Sūrat al-Isrā’