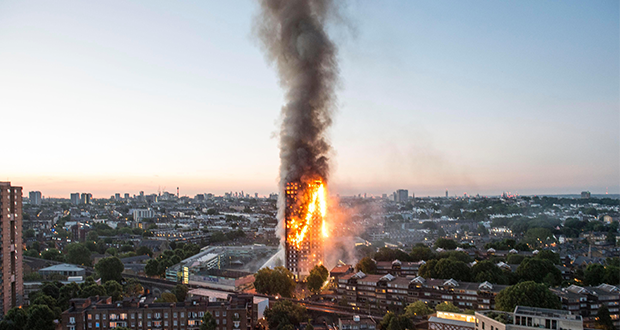 Laughing with your friends as you walk back from the night prayer. Looking forward to seeing your wife and then eating the suhūr together. Perhaps letting your mind wander to what you should buy for your children’s Eid presents. Suddenly you see hint of a flame in the distance. Your pace quickens. Perplexed, you wonder which building is on fire. Panic grips. You realise it is your home. You race to your family. Held back by the police who tell you they are safe. You watch in disbelief as the flames engulf the building in minutes. Trapped residents throw their children from the buildings whilst others leap out themselves. The true extent of horror to only be realised in the morning.

Much has been made of the ‘official’ death toll. Ridiculous figures of 12 then 30 were published by the media, yet it was plain to see that the real numbers would be considerably higher. So why is the real death toll being held back from the public? Is there a plan to withhold the true figure until the media spotlight moves on to the next story? The authorities’ attempted management of (and haste to quell) the survivors’ grief and pain by co-ordinating the slow release of information is shocking. Why was Lilly Allen silenced after questioning why the true death toll was being concealed, and her invitation to appear on Newsnight withdrawn?[1] The BBC is paid for by the license fee that you and I pay. It is not meant to be a mouthpiece for anyone but the people.

It came as no surprise when Theresa May chose not to visit the survivors. However, what is more outrageous is the reason given: “security concerns”. What security concerns? Are we being asked to believe that the demographic of the victims suggests they are a threat, despite the horrors they have just witnessed? An unreserved apology from Downing Street should be made and those media outlets who tacitly condoned this reason should hang their heads in shame. It should be noted that other public officials, such as Sadiq Khan, who faced the residents’ ire with good grace, Jeremy Corbyn and even the Queen and Prince William felt able to meet and mingle with the victims free from any such “security concerns”. Also telling is that David Cameron met with residents of the devastating floods in Cumbria in 2015 without any such security concerns being cited.

The Grenfell inferno was not the first fire in a high rise building. In 2009 a blaze in Lakanal House in Camberwell, south-east London, resulted in the deaths of 6 people: three women and three children. The report which followed was published in 2013 and recommended a full fire safety review. Gavin Barwell, who currently is Chief of Staff, but in 2013 was housing minister “sat on” this review for 4 years.[2] As is being reported, had the authorities acted on that report, perhaps this tragedy could have been reduced or avoided altogether.

It has also emerged that Brandon Lewis, who has recently been promoted to immigration minister, declined in 2014 to compel building developers to install sprinklers. As the managing director of Fire Protection Association said, a sprinkler system would have “undoubtedly” saved lives at Grenfell Tower. Instead, Mr Lewis told MPs: “The cost of fitting a fire sprinkler system may affect house building—something we want to encourage.” Unfortunately it is no longer a surprise in today’s world to see admissions of putting profit before poor people’s lives.[3]

Despite the reported £10 million spent on refurbishing Grenfell Tower, the cheaper, less safe cladding was used—which has been reported as the cause of the fire spreading outside the building, turning an isolated fire in one flat into the whole building being engulfed. For just £2/square meter more, the greater fire retardant, safer cladding could have been used, and potentially lives saved.[4] Even more unbelievable it has also now emerged that the dangerous cladding used in Grenfell Tower was banned in Europe and the UK.[5] Once again, profit above poor people’s lives. It should not be forgotten that the Grenfell Tower inferno occurred in one of the wealthiest places on earth. Whilst the council was niggling over £2, dozens of luxury properties built for foreign investors were lying empty, just streets away.

Perhaps most despicably and as recently as 2016, Conservative MPs voted down an amendment proposed by Labour that was aiming to ensure rental properties were “fit for human habitation”. It transpired that 72 of those Tory MPs who voted against the bill were themselves landlords.[6] The combination of vested interest and access to power is a concerning and—as this tragic event has demonstrated—sometimes dangerous dichotomy.

Local blog Grenfell action group repeatedly brought up concerns about fire safety but these were said to have fallen on deaf ears. However, if that building’s occupants were of a different class or socioeconomic background, would that have been the case? If they were white middle class Tory voters would that have been the case? But these were ethnic minorities drawn from the demonised “immigrant” group. Worse still, containing a large if nor predominant number of Muslims. ‘The worst of the worst.’ The minority group which has been subjected to the most vile and endemic political narrative over the last few years. Those media outlets and politicians who have participated in and encouraged the vilification of this marginalised minority and others also have blood on their hands. It is their hate-filled rhetoric against the “lower” classes which allowed an environment in which repeated concerns about fire safety could be ignored, coming as it did, from the most vulnerable members of our society. Indeed, their rhetoric continues unabated as, at the time of writing, IPSO has received over 1,000 complaints about the Daily Mail publishing photographs purporting to be of the “Ethiopian taxi driver” whose faulty fridge allegedly started the fire[7]. It seems some habits are hard to break, even at a time of immense public sadness.

This may be why Sophie Khan, solicitor for the Lakanal Tower victims called for an inquest instead of a public inquiry, into the Grenfell Tower fire.[8] Ms Khan explained that in a public inquiry, which Theresa May quickly called for, the government controls the narrative, but in an inquest the government loses control of what a jury verdict would be. Ms Khan went on to say: “I’m very concerned as to why Ms May came out so quickly to say, ‘public inquiry’. What is there, that she knows, that needs to be hidden?” Indeed many are worried that this could be a scandal that goes to the very heart of government.

Just as we hold our politicians to account we must ask questions of our Muslim leaders. After the tragedies of Manchester and London Bridge, Muslim leaders rushed to make statements. Yet after one of the worst calamities this country has seen in living memory how many Muslim leaders have stepped forward to assist those affected? Are they above sorting clothes or preparing meals? How many have gone to the grieving families and reminded them they are part of a larger family? Not all Imams are the same. One victim I spoke to said that Imām Wasim Kempson was seen on the very next morning of the blaze comforting the victims. He reminded one man whose friends had been affected by the blaze, words of our noble Messenger (sall Allāhu ‘alayhi wasallam):

“What do you regard as martyrdom?” His companions answered: “Being killed for the sake of Allah.” The Messenger of Allah (sall Allāhu ‘alayhi wasallam) then said:

“Whoever believes in Allāh and the Last Day, let him honour his neighbour.”[10]

If things had been slightly different, it could have been me and my family living in Grenfell Tower, and be under no illusion, it could have been you, too. This is a country divided by its fault lines of class. Grenfell Tower inferno could be a seminal moment in British history, like the Selma to Montgomery marches in the American Civil Rights Movement. It could mark the moment when the poor and disenfranchised stand up and say:

“Enough is enough, we are also citizens of this country. We have a voice, and we must be heard.”

[9] Classed as sahih by al-Albani in Sahih Abi Dawud

Previous: Turkish Scholars: “We are with the Qatari state and scholars like Qaradawi”
Next: #FinsburyPark Attack – as it happened