Moazzam Begg walks free, but what about us? 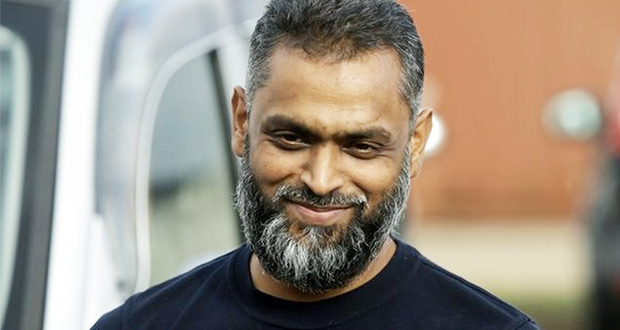 Moazzam, CAGE and the paralysing fear of association

Allāh will certainly aid those who aid His (Cause). Lo! Allāh is Strong, Almighty [1].

So fear them not, but fear Me, if you are true believers [2].

Let me pose a question to you. How many Muslims are actively helping, in whatever way, to alleviate and aid the suffering Muslims of this Ummah in the freeing of Muslim prisoners which was an instruction from the Messenger of Allāh (sall Allāhu ʿalayhi wa sallam)? Most Muslims? 5 Million? 2 Million? 5 thousand even? The truth is, it’s a number far less than that. Alhamdulillah, CAGE are one such organisation who have championed this cause. Ibn Taymiyyah said concerning this: “Freeing the prisoners is one of the greatest compulsory deeds and spending ransom money and other means towards that, is one of the greatest ways to come close to Allāh” [3]. In addition, Ibn Hajar Al-Asqalani said that “freeing the prisoners is compulsory on a collective duty” [4].

Given the nature of the work CAGE are involved in, it is no wonder that the powers that be have been seeking to put them out of existence. They have tried to do this by unlawfully detaining one of its founders, Moazzam Begg who has, Alhamdulillah (Praise be to Allāh) just been released after 8 months in incarceration. In addition to this is their making it difficult for CAGE to operate by demonising Moazzam and the whole organisation, closing their and their supporters’ bank accounts, and other clandestine tactics thereby seeking to stop the work that they do.

The Muslims community’s response to the freeing of Moazzam after all of the so-called “terrorism” charges against him were dropped has been one of joy and happiness, and rightly so. However, how many of us really campaigned for his release? How many of us shared any articles in support of Moazzam/CAGE or raised awareness about the injustice? I had noticed that prior to Moazzam’s release, there had been a reluctance from many on social media to show support. I truly believe that many of those who are expressing joy today upon the release of Moazzam are genuine and sincere in this but the question which naturally then comes to mind is: why were people afraid to show solidarity with him and CAGE before his release? Unsurprisingly, it is easy to feel afraid and in fear of being associated with a so called “terrorist” or an organisation that represents so-called “terrorists”.  There is a very famous story which I am sure many have heard of before which I will now relate to you because of the lessons we can derive from this.

There were four bulls. One of them was white and the other three were black. They used to live in a dangerous area surrounded by wolves. The way they protected themselves was that they were always together, they would stick together, watch out for each other, everyone was keeping an attentive eye out, and they survived, even though the area was surrounded by wild beasts. But the three black bulls had a meeting one day. They said,

“This white bull is giving us away. When we try to hide at night, because we are black no one can see us, but the enemy is able to see the white bull, so why don’t we just let him go? The three of us will be together so let’s just let the white bull go away because he is just too much trouble.”

So from that day on, the three black bulls would be on one side and the poor white bull was alone. They boycotted the white bull. Now, the wolf is very intelligent. He was able to detect the disunity that was amongst these bulls. So he made his move and he attacked the white one, and while he was devouring his flesh, the three black bulls did nothing. They were watching it, while their brother was being torn into pieces. Then, they were three.

The following night, the wolf attacked the three black bulls. Why? Because now they were one bull short so they were not as strong as they were the day before. Because they let down their brother, the white bull, now the wolf attacked them and was able to snatch away one of the black bulls. And then, they were two. So, the following night, it was an even easier thing for the wolf, so he ate one of them. And then, there was one. On the final night there was only one bull left and he was trying frantically to run away from the wolf, but now the bull had no supporter and no helper. The wolf pursued him with confidence and knew he would get tired and fall down. There was nothing else the lone bull could do.

The wolf ominously circled the bull, very happily with confidence, and he pounced at the bull and grabbed him by the neck. While the wolf sunk its teeth into the doomed bull, he cried out his profound, last words that contain the moral of the story:

“I was eaten, the day the white bull was eaten!”

If only this epiphany had come only days earlier.

This story is a good representation of the situation of the Muslims today. This shows us the consequences of having disunity. If we are to withstand the pressure being exerted on the Muslim community here in the UK and indeed beyond, all done under the guise of fighting “extremism”, then we MUST understand that the only way we can do so is by being united and supporting one another. The above story serves a great lesson for those who may think that they can hide, “keep their heads down”, remain quiet and they will be left alone in their comforts. This is not the case and as long as you believe in “Lā ilāha illAllāh”, you will never be left alone, indeed Allāh says as much when He says:

“Do people think that they will be left alone because they say: ‘We believe,’ and will not be tested?” [5].

A famous saying comes to mind which is that when you see your brothers wherever they are being abused, harassed and arrested and you do nothing about it, then beware and realise that you or a loved one will be next. Although this time it was Moazzam and CAGE, tomorrow it could quite easily be Shaykh Haitham al-Haddad and MRDF, Shaykh Zahir Mahmoud and As-Sufa, or Imam Shakeel Begg and Lewisham Mosque-what would our response be then?

The principle we must all adopt is that we must never forsake our brothers in their time of need. The Messenger of Allāh (sall Allāhu ʿalayhi wa sallam) said:

“A Muslim is the brother of a Muslim – he does not wrong him nor does he forsake him when he is in need; whosoever is fulfilling the needs of his brother, Allāh is fulfilling his needs; whosoever removes distress from a believer, Allāh removes from him a distress from the distresses of the Day of Resurrection; and whosoever conceals the faults of a Muslim, Allāh will conceal his faults on the Day of Resurrection” [6].

We can deduce from the above that if we betray or forsake a Muslim who is in need today, be assured that Allāh will forsake us tomorrow. It is also clear from the above ḥadīth, that there is ample reward in helping the one in need. Ibn Rajab in his explanation of the above ḥadīth, questions the difference between the two situations of relieving the difficulty for one in this world and having the removal of the distressful aspect in the Hereafter. He explains that since the difficulties of this life are incomparable to the distresses of the Hereafter (which nobody can endure as it is beyond human capacity), Allāh reserves the reward for removing a distress of this life until the Day of Judgment – such is the measure with which Allāh regards this noble deed.

In keeping with the tradition of our beloved Prophet (sall Allāhu ʿalayhi wa sallam) let us help our brothers and sisters in need. But what can we actually do? Duʿā is one of the strongest and most lethal weapons that a believer has. Allāh hears all the duʿās that are made to Him, and hears the weeping of the distressed and oppressed, and accepts those who repent to Him. Nothing can avert the Qadr (destiny) except duʿā so we should first and foremost make fervent duʿā and the freeing of Barbar Ahmad, Talha Ahsan, Abu Qatada and now Moazzam is evidence of those duʿās being accepted.

Another way to support organisations that are being demonised such as CAGE and HHUGS (who support the families of those unlawfully detained) other than making duʿā is through Sadaqah (Charity). We have a beautiful example of the companions of the Messenger of Allāh (sall Allāhu ʿalayhi wa sallam) helping their fellow brothers and sisters in Islām at their time of need. When Muslims emigrated from Makkah to Madīnah, the Ansār (“the Helpers”, the indigenous Muslims of Madīnah) accommodated the Muhājirūn (the immigrants from Makkah) and supported them and helped them in every possible way. The Ansār supported and loved them; they took them into their homes, fed them the food that they ate, and gave them the places where they slept – this was the ultimate act which exemplified the Muslim brotherhood.

We should learn from this great example, and help our suffering Muslim brothers and sisters in Islām in the same way, fī sabīlillāh. Give what money you can and set up standing orders for whatever amount you can give. This is the greatest way in showing solidarity with our brothers and defeating our enemies in showing them that by seeking to suffocate the work of organisations such as CAGE or HHUGS, this only unites the Muslims and we will now give even more than before – let us make their plans to demonise these organisations as a means of miscalculation for them. In fact, we even learn from the Sīrah of the Messenger of Allāh (sall Allāhu ʿalayhi wa sallam) that even the non-Muslims helped the Muslim community when the social boycotting campaign against them was being waged by the Quraish – here we see the example of Hishām b. Amr who formed a small group who did not agree with the injustice of the boycott and began smuggling food to the Muslims who had been banished to the mountains.  If this was the case with nom-Muslims helping Muslims, then what of you and I?

Perhaps the greatest way however of supporting a brother such as Moazzam or an organisation in need is to simply show solidarity with them, irrespective of whether we agree with everything they do or stand for and to not be paralysed by our fears of being associated with someone simply because the media puts out malicious rumours about them. And now that Moazzam is free, will we forget that there are many others on these shores and beyond who remain detained from Umm Mouloud aka Gerrie Taheri (who was arrested along with Moazzam) in the UK, to Shaker Aamer in Guantanamo Bay, to Aafia Siddiqui in the US, to President Morsi in Egypt and Alan Henning in the Middle-East, to name a few?

We as a community must conquer our fears. Our greatest fears involve the unknown. If however you know your fears, then you will move a long way towards emasculating them. The greatest fear every Muslim should have is his/her destiny in the hereafter, not the confines of this world as the timeless reminder from Ibn Taymiyyah reminds us: