Moeen Ali and the Language of War and Protest 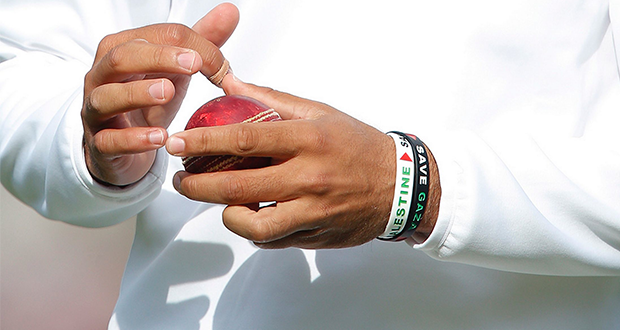 “I wear the beard as a label,” cricketer Moeen Ali said in an interview earlier this summer[1]. “I want people to know I am a Muslim and I want people to know I am representing the Muslim faith. I want to show that you can practise your faith and still play cricket to a high level. Yes, I see myself as a role model. And as a role model, I have to behave in a certain way. Do I see it as a mission? Yes, I do.”

Moeen represents modern multicultural Britain. His magnificent beard has caused some in the cricketing world to compare him to the cricketing great, W.G. Grace. The country Moeen represents today is, however, very different to the country his Victorian predecessor represented. W.G.’s cricketing career coincided with Britain’s imperial century and the rise of Britain as the international super power. Moeen’s era coincides with a feeling of great war-weariness. The British Empire, exhausted from its many decades of military expansion, toils on its last legs as the Scots prepare themselves for independence. In today’s increasingly multicultural Britain, there is considerable resistance to more war and the idea of seeing yet more British troops stationed in countries that British citizens or their ancestors once hailed from. Moeen’s resistance to Israel’s imperial ambitions and ethnic cleansing of the Palestinian people, therefore represents, to a greater or lesser extent, the desire of the people. A new YouGov poll has revealed that almost two thirds of the British public (62%) believe that the Israeli government is committing war crimes.[2]

From Muhammad Ali’s famous refusal to fight in Vietnam to the sporting world’s boycott of Apartheid South Africa, sports and politics have long been painfully intertwined. Despite largely successful attempts to strip sportsmen of their personality and turn them into platitudinous slaves to corporate endorsement, politics has nevertheless managed to seep into the conscience of sportsmen. When Moeen Ali walked out onto the Southampton cricket pitch to play in the third test match against India wearing ‘Save Gaza’ and ‘Free Palestine’ wristbands[3]—Daily Telegraph columnists having previously questioned his loyalty to England whilst desperately trying to hide their racism—he was guilty of nothing other than showing his human side.

For too long we have been accustomed to expressionless sport. Moeen’s was a refreshing act of protest, much needed after the gut-wrenching scenes of violence on our TV screens the nights before the test match and every night since. The International Cricket Council (ICC) banned Moeen from wearing the wristbands again, deeming his protest to be one motivated by “political, religious or racial activities or causes[4]. But is calling for a Free Palestine still a political issue? The English Cricket Board thought not when they decided to back Moeen’s right to wear the wristbands, rightly describing his protest as ‘humanitarian’ rather than political[5]. Moeen’s club, Worcestershire, are also backing their player and will not prevent him from wearing the wristbands in matches for the county. The ICC’s decision was labelled a ‘complete joke’ by Kabir Ali, Moeen’s cousin and former English test cricketer[6]. Former Pakistan cricketer Azhar Mahmood also came out in support of Moeen: “All we can do is make people aware of the situation [in Gaza].”[7]

Indeed, to argue that Moeen’s protest was motivated by ‘political, religious or racial activities or causes’ ignores quite fundamentally the issue at hand. The Israeli-Palestine conflict is no longer a political issue. It is one that concerns the deprivation of the most basic human rights. It is a human issue. Israel’s clever use of language to portray their victims as perpetrators is not uncommon in modern asymmetric warfare. Occupation? No we are the not occupiers; they are occupying our land. Civilians? No, no, we only kill terrorists. Children? No, no, no, those were ‘human shields’. UN Schools and hospitals? No! Secret ‘bomb shelters’! This is as much a war over language as it is over land.

The Israeli government are experts in manipulating the language of war in order to justify the unjustifiable.  Accusing the enemy of harbouring ‘human shields’ allows Israel to justify their murder of innocent civilians. It enables all civilians to become legitimate targets. The media is complicit in portraying this highly asymmetric conflict as a symmetric one between two evenly matched military entities. F-16 fighter jets and unmanned drones indiscriminately rain down terror upon the inhabitants of Gaza; Israeli citizens, protected by the sophistication of the Iron Dome and plenty of bomb shelters, are pestered merely by their use of homemade projectiles.

History is often the propaganda of victors and, like the military asymmetry, one side also boasts much greater strength in the ferocious propaganda war being waged online. While the hashtag #GazaUnderFire[8] was a spontaneous reaction from appalled twitter users around the world, students employed by the Israeli government launched the hashtag #IsraelUnderFire.[9] In recent years Israel has paid countless students to assist in its hasbara, or “public diplomacy” (propaganda) campaign to engage in online discussion threads to promote Israel’s interests. The IDF asked its followers to retweet its posts stealing the popular hashtags #WorldCup and #GERvsARG in order to maximise its reach. Israel is much better placed to impose its fundamentally flawed narrative on the world stage—and to such a great extent that we find ourselves now questioning Palestine’s right to exist.

The Black Power Salute at the Olympic Games in Mexico in 1968 changed the course of 20th century history. The culmination of a global sporting event watched by millions around the globe proved the perfect stage to lend vital support to the civil rights movement in America. The image of the raised black-fisted gloves went on to represent resistance and defiance against oppression. Whilst Moeen Ali’s ‘Free Palestine’ wristbands may not reverberate around the world in quite the same way, it was a stand for justice just the same. Moeen’s sweaty wrists will not prove to be the iconic images for justice in Palestine as the defiant fists were for inequality in America, but the rights of the Palestinians are certainly no less of a cause.