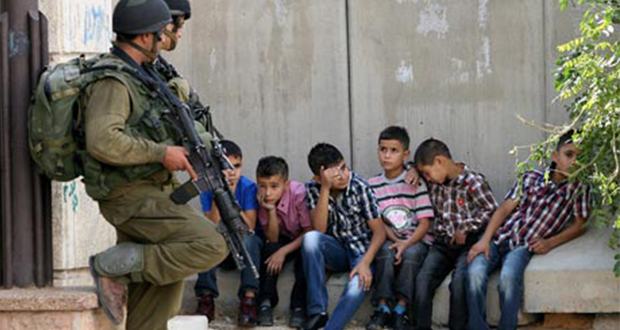 Protect Your Own Edge

Israel is Taboo. Criticising anything Israel does is akin to political suicide in this modern day. What hold does Israel have on the world that as soon as Israel enters a confrontation, politicians en masse immediately feel the need to express their support for it?[1][2][3][4]

There are countless wars taking place across the world but nothing can guarantee the unity of world leaders more than the killing of Muslims in Palestine. Why is it that if Apartheid is mentioned anywhere else in the world then it is greeted with hysterical protest and opposition?

However, despite the fact that Apartheid has been taking place in Israel for decades now, whenever the topic is raised it is greeted with mute silence?[5] Why is it that despite the murder of thousands and thousands of Palestinians over the course of the life of the illegal state of Israel, that these deaths are not as fresh in the mind as the holocaust committed by the brutal Nazi regime over 60 years ago? Is the world unanimous in its acknowledgement that a Jewish life is more valuable than a Muslim life?

Why is it also, that popular news channels such as ABC feel the need to lie and show images of the destruction in Palestine and sell it as destruction in Israel caused by Palestinian “bombs”?[6]

The answers to these questions are elusive. Demonstrations have spread throughout the world in anger over the wholesale slaughter of Muslim life. But our subjugated leaders have predominantly failed to act. So what can we do as Muslims to fight the oppression that is being inflicted time and again upon our brothers? Do we demonstrate for sympathy? Do we look to the sympathy of notable non-Muslim characters for their anti-Israel opinion so as to wave it in the faces of the oppressors and the supporters of those oppressors?

We do not want the sympathy of the world. We have had sympathy for the past few decades and it has achieved nothing. We have long since stopped expecting the international community to enforce its own laws on Israel. We know that the world claims it sides with Israel because of a sense of guilty conscious for allowing the holocaust to take place. What we want is recognition that we are in a war: a war that has two sides, not a peace loving country being terrorised by uncivilised Arabs.

The use of the word terror is noteworthy. The oxford English Dictionary defines terrorism as follows:[7]

“The unofficial or unauthorised use of violence and intimidation in the pursuit of political aims.”

The use of the word unofficial is interesting as it implies that violence committed by an official body such as an organised state army is not terror. However using this definition in general, Israel’s action of the collective punishment of Palestinians regardless of it being provoked or unprovoked fits very snugly. But are the Palestinians living in terror?

It is critical to note that despite having one of the most advanced military divisions in the world and a full intention to terrify, starve and intimidate the Palestinians into submission, the Muslims do not feel that terrorised. In order to be terrorised the fear factor is required. For the Palestinians, there is no fear factor. Maybe there is a fear that the next strike will lead to the death of a loved one. Maybe there is the fear that the next air raid will destroy homes and leave women and children without sanctuary. But, that next strike is coming. As inevitable as night and day, that next strike is coming. If you know that the next strike is coming and you know that the military aircraft that is strafing over your home could be carrying your ticket to martyrdom, and you have been living this life for over 30 years, tell me where the terror is. If you are born in this battlefield and have grown watching family pride at the Shuhadā and learning to recognise the sound of a fleet of Israeli war planes, tell me where the terror comes from.

The real people who are in fear and have trouble functioning are the Israelis.[8] The capabilities of the resistance are nothing compared to the advanced military of the Israelis. If you compare the two military forces from a technology and resource perspective then the Israelis are like the Romans fighting the barefooted, nomadic Arabs. However the truly fearful ones are the Israelis.

“They fight not against you even together, except in fortified townships, or from behind walls.”[9]

The cowardly Israelis have also assumed that Ramadān is a good month to carry out a punishing attack since the holy month of Ramadān is when Muslims are understandably more tired due to fasting. They have neglected to remember that the month of Ramadān is synonymous with Jihād. The Battle of Badr was fought on the 17th of Ramadān. They shall indeed reap the reward of the tyranny they practise. If not in this life at this time, then in the hereafter.

We should never despair of the victory of Allāh. Look at this situation we have had in Gaza recently and compare it to a situation of a different time and place. If we think that the situation of the Muslims in Gaza is untenable then how do you think the Prophet sala Allāhu ‘alayh wasalam and his beloved Siddīq felt when they were in the cave of Thawr having just escaped from Makkah? An open manhunt is taking place, a great reward has been advertised. There are even people at the door of that cave. Imagine the thoughts of Abū Bakr at this time. In this instance, maybe his thoughts were of despair. Never for himself, but for his beloved Messenger sala Allāhu ‘alayh wasalam and the Da’wah. Maybe he thought that capture was inevitable when the pursuers had to but look down and they would see their quarry. What does Allāh reveal at this instance?

“If you do not aid the Prophet – Allāh has already aided him when those who disbelieved had driven him out [of Makkah] as one of two, when they were in the cave and he said to his companion, “Do not grieve; indeed Allāh is with us.” And Allāh sent down his tranquillity upon him and supported him with angels you did not see and made the word of those who disbelieved the lowest, while the word of Allāh – that is the highest. And Allāh is Exalted in Might and Wise.”[10]

So what can we do to support our brothers in Palestine? Should we do like those 100 or so Zionists who have flocked to join the IDF? Is physical aid the answer? Let me ask a different question: is your uninformed, untrained physical aid the answer? We have no knowledge in war craft, we have even less knowledge in the wisdom and Islamic knowledge and ethics required to wage war. But that is not to say we cannot make Jihād. In many instances in the Quran, Allāh refers to the Mujāhidīn as those who strive in the cause of Allāh with their lives, but also their wealth.

The charity that you give to Gaza, Syria, Iraq, Burma, Afghanistan, Kosovo or any other place is Jihād. It might not contribute directly to the war effort, but it most certainly looks after the hungry, the starving and the injured in these conflicts enabling the fighters to pursue their goal of lifting oppression in general and the siege on Gaza in specific.

“Say to (them): “If the home of the Hereafter with Allāh is indeed for you specially and not for others, of mankind, then long for death if you are truthful.”

But they will never long for it because of what their hands have sent before them (i.e. what they have done). And Allāh is All-Aware of the Ẓālimūn (polytheists and wrong-doers).”[12]