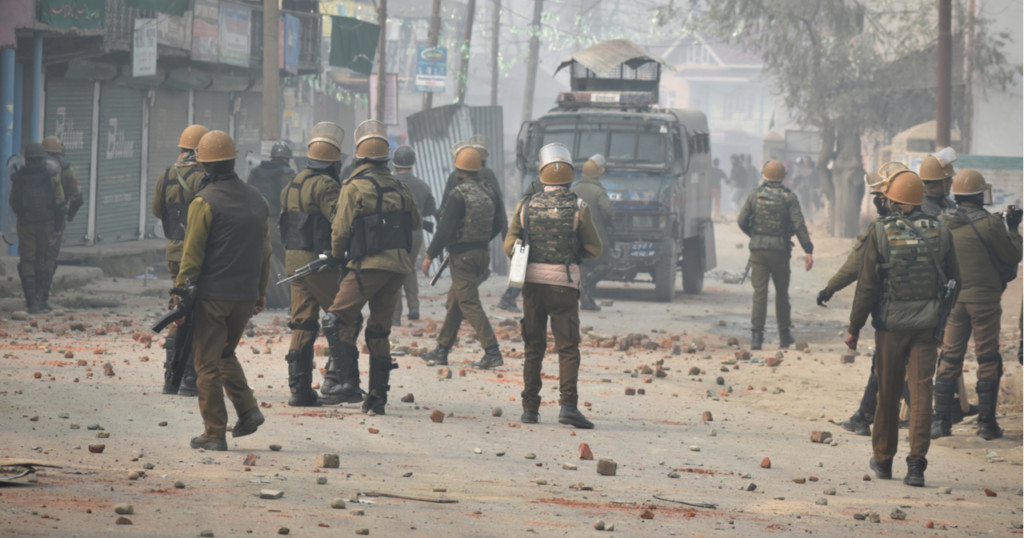 Indian state taking the war in Kashmir to the next level

“What if something happens and you are stuck [in Delhi] with no option to come back?” “Does anyone know what is happening?” Frantic calls from home have been a regular feature of our everyday life these last few days; our families and friends back in Kashmir are becoming increasingly scared and apprehensive. Back and forth conversations follow the same routine: we tell them what we heard, they tell us what they are hearing and seeing. No one really understands what is happening.

These conversations are taking place in the backdrop of the war hysteria created in Kashmir by the Indian state. The directive from the state,[1] on the 2nd of August had requested tourists and yatris (Hindu pilgrims who come to visit the Amarnath shrine in Kashmir every year) to pack up and leave the valley as soon as they could. Flight operators have been requested to make more flights available.[2] There are reports of additional forces being deployed in Kashmir (in addition to the 700,000 already stationed there).[3] There is panic. Locals are left to wonder if these events are foreshadowing a large-scale war. People fled in droves to stock essentials. Petrol pumps and ATMs soon ran dry. The government did nothing; in fact it still hasn’t addressed any of people’s concerns.

With uncertainties looming large, and no clarifications from the Indian government, it has only added to the feeling that something big is about to happen. No one knows what. There are various conflicting reports, from the dilution of Article 35A,[4] which gives special rights and privileges to the permanent residents of Jammu and Kashmir, to the trifurcation of the state into Jammu, Kashmir, and Ladakh so that Kashmir could be shown the iron hand.[5] Every probability is being discussed. Kashmir has garnered international attention, with the US President Donald Trump offering to mediate between India and Pakistan.[6] In the struggle for Right to Self Determination, Kashmiris have been engaged in resisting control by India through its armed forces and installed local governments for decades. However, India has repeatedly attempted to create a narrative of ‘security threat’ and ‘national interest’ around the issue, while unabated violence against Kashmiris goes unnoticed.

“We have been told that it could be a turmoil of high intensity – post-Burhan Wani strike of 2016 multiplied by 10”, an officer was quoted by a Delhi-based media outlet.[7] The 2016 turmoil in question saw the killings and “the world’s first mass blinding” of dozens of Kashmiri youth,[8] at the hands of Indian forces following the killing of popular militant commander Wani in Southern Kashmir. The same outlet quoted another officer’s remark, “Not more than 350 cellphones and around 2,000 specially-arranged satellite phones, mostly in possession of senior government functionaries, would remain functional.” The government’s sole concern for the tourists and the yatris makes it abundantly clear that there is absolutely no concern for Kashmiris. While the Indian state claims for Kashmir to be its integral part and Kashmiris as its own citizens. The reality on the ground is clear. Kashmiris are the ‘other’, whose lives need to be regulated. Adding to their fear is a deliberate policy. Perhaps it helps to keep Kashmiris at the edge, a lab experiment at their disposal. With a Hindu majoritarian party in power in India, the antagonism against Kashmiri Muslims has come out in the open, legitimised in the public sphere with due complicity of the state.

An important development has been the treatment of pro-India parties in Kashmir by the Indian state. Those who have controlled Kashmir for India for so long are just as clueless as the Kashmiris, seeking to score political points yet being slighted nonetheless. It is abundantly clear that they are dispensable in the eyes of the Indian state.

For people who have suffered decades of violence at the hands of the Indian state, the fear psychosis is nothing new. Children raised in the nineties, when the armed insurgency was at its peak and the repression by the Indian state widespread and brutal, have slept to the sound of gunfire and were woken up by it. We have lived through the noise of soldiers’ jackboots keeping us awake through the night, fearful that they could barge in at any moment. We have woken up to curfewed mornings and cordoned homes, afraid which family member would be taken away. We have known fear like it was our second skin, but we also know hope and resilience. Despite brutal militarised control, Kashmiris have continued to speak up for their rights, for a life of dignity and freedom. How long before the world takes note?