Plotting of Cameron, of al-Rahman & the discovery of a Qur’an 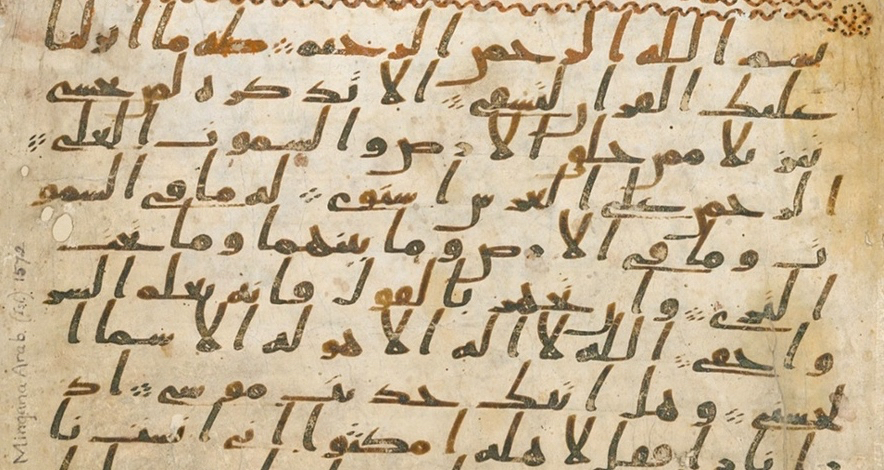 The Plotting of Cameron,
The Planning of al-Rahmān,
The Discovery of a Qur’ān.

“And (remember) when the disbelievers plotted against you (O Muhammad) to imprison you, or to kill you, or to get you out (from your home, i.e. Makkah); they were plotting and Allāh too was planning, and Allāh is the Best of the planners.” [1]

Fir’awn (Pharoah) who ruled Egypt was a tyrant who oppressed Banī Isrā’īl (the children of Israel). He used every means to demean and disgrace them whilst he and his followers were intoxicated with pride of race and material civilisation. They were kept in bondage and forced to work for him for small wages or nothing. Under this system the people obeyed and worshipped the pharaoh.

Also read, Qur’ān Discovery: I am neither excited nor bothered by Shaikh Dr Haitham al-Haddad

Years passed and the despotic Fir’awn continued to rule and he saw the children of Israel multiplying and prospering. It is said that he heard them talking about a vague vision that one of Israel’s sons would dethrone him. Fir’awn one night dreamt about a fire which came from Baitul-Maqdis (Jerusalem) and burned the houses of the Egyptians and did not do harm to the children of Israel. When he woke up, he was horrified. He then gathered his priests and magicians and asked them about this vision. They said: “This means a boy will be born of them and the Egyptian people will perish at his hands”. As a result, Fir’awn commanded that all male children of the children of Israel be killed and thus began one of the world’s first ever Prevent strategies.

We know that the mother of Mūsā (‘alayhi al-Salām) after giving birth to him, she was in fear of him being killed by Fir’awn’s Prevent Police and she was inspired by Allāh to put him in a basket and throw it into the river as their house was near the Nile. The basket began flowing in the river until it reached the palace of the very tyrant that the basket was meant to escape. But this was of course a plan of heavenly providence and Allāh caused love to enter the heart of the wife of Fir’awn for the baby and she urged her husband not to channel the baby through his Prevent programme. And so it came to be that the plot of Fir’awn in seeking to exterminate the very one he feared, was caused by Allāh to not only survive Fir’awn’s evil plots, but that Allāh would use Fir’awn as a vehicle and means to raise his enemy, Mūsā (‘alayhi al-Salām) in the royal palace with all the privileges that came with it.

Fast forward some three thousand years to 20 July 2015 to the city of Birmingham, UK where the Prime Minister, David Cameron gave a speech to demean and disgrace the Muslim minority community wherein he set out that Islamic extremist ideology is the “struggle of our generation” [2]. Like Fir’awn before him, he has already developed the Prevent Police to criminalise views which he does not agree with and has used the deceptive magicians of our time to prepare his speech in setting out his strategy.

He used the word “reform” six times in his speech in reference to reforming Islamic beliefs and practices and effectively creating a deformed, mutated version of Islām which is unrecognisable to the majority mainstream Muslims. Many from the Muslim community were outraged and appalled by Cameron’s attempt to use their faith as a political football and a feeling of dejection had set in particularly as this speech was the culmination of a series of policies, laws and media backlash and anti-Muslim rhetoric against the Muslim minority community. Much like the Children of Israel, they were seeking divine aid from their Lord.

The dust had barely settled from Cameron’s shambolic speech when there was breaking news on 22 July 2015 that in the very same city that Cameron delivered his speech. An exciting discovery had apparently been made: the world’s oldest manuscript of parts of the Glorious Qur’ān had been found in Birmingham University Library [3]. The testing, which is said to be more than 95% accurate, has dated the parchment on which the text is written to between 568 and 645 AD, the researchers claimed. If this is true, it means it was created close to the time of the Messenger of Allāh (sallAllāhu ‘alayhi wasallam) and quite possibly therefore, it was written by a Sahābi (Companion).

This is a treasure that is of global significance to Muslim heritage and pondering over the timing of its discovery is also important. Just think, this parchment has been in existence for nearly 1400 years and in existence here in the UK for over a hundred years (it is thought that the parchment found its way into the UK at some point in the 19th Century) and yet it was Allāh who chose to reveal its discovery now. Why? Ponder further and you will see that Allāh had caused this Qur’ān to be preserved and protected just as He did with Mūsā (‘alayhi salam) when he was thrown into the river, and like with Mūsā (‘alayhi salam), it found way its way here in the UK, to a country which has historically had hostile relations with Muslims be it its leaders such as King Richard leading one of the Crusades against the Muslims or in more recent times, its Colonial project where they occupied and ruled over vast parts of the Muslim world, who actively dismantled that Ottoman Caliphate and redrew the Middle East and Asia as we know it today.

And the parallels with the story of Mūsā (alayhi al-Salām) and Fir’awn does not end there because one of the parchments is from Sūrah Tā Hā, chapter 20 of the Glorious Qur’ān. Among the subjects treated in this Sūrah are Allāh’s call of Mūsā (‘alayhi al-Salām) (20:10), the Exodus of the Israelites and the crossing of the Red Sea (20:77), the worship of the Golden Calf (20:88) and the Fall of Man (20:120). The opening verses are clearly visible from the pictures of the parchment which read as follow:

“Tā-Hā. We have not sent down the Qur’ān unto you (O Muhammad) to cause you distress. But only as a Reminder to those who fear (Allāh). A revelation from Him Who has created the earth and high heavens. The Most Beneficent (Allāh) Istawa (rose over) the (Mighty) Throne (in a manner that suits His Majesty). To Him belongs all that is in the heavens and all that is on the earth, and all that is between them, and all that is under the soil. And if you (O Muhammad) speak (the invocation) aloud, then verily, He knows the secret and that which is yet more hidden. Allāh! Lā ilāha illā Huwa (none has the right to be worshipped but He). To Him belong the Best Names. And has there come to you the story of Mūsā?”[4]

SubhanAllāh (Glory to be to Allāh)! We also know when Mūsā (ʿalayhi al-Salām) was tasked with the mission of inviting Firʿawn to the worship of Allāh and of delivering the Children of Israel from their enslavement, Mūsā (ʿalayhi al-Salām) instilled such fear into Firʿawn that in order to disprove Mūsā (ʿalayhi al-Salām), he challenged him to a competition where he called upon his greatest magicians from across his kingdom. The appointed event was the day of the feast. The spectacle of this event would have been held in what we can only visualise in today’s terms as being held in a great stadium, a coliseum-like arena, hundreds and thousands watching in amazement with Firʿawn and his army of supporters on one side, whilst Mūsā, his brother Hārūn (ʿalayhimā al-Salām), and of course their Lord, on the other side.

The magicians thew their hand first and caused a great deal of fear and deception just as Cameron feared the Muslim ideology and threw his hand first having plotted for weeks to lay out his plans in subverting it. But just as Allāh does with all tyrants, He turned Firʿawn’s plans on its head because when Mūsā (ʿalayhi al-Salām) threw in his hand, Firʿawn’s deception was exposed and obliterated. Similarly, Allāh has turned Cameron and his magicians’ plots on their heads because this finding has trumped his speech and has become a global phenomenon. It has lifted the spirits of the Muslims not only in the UK, but across the world and from a state of hopelessness; many Muslims feel a sense of optimism.

For the Muslims and its detractors alike, this is a reminder that at a time when there are aggressive calls for Islām to be reformed, Allāh is reaffirming that this Qur’ān is complete and perfect and that the Qur’ān revealed to His Messenger (sallAllāhu ‘alayhi wasallam), that was memorised by Abū Bakr (radiyAllāhu ‘anhu), propagated far and wide by ‘Umar (radiyAllāhu ‘anhu), compiled by Uthmān (radiyAllāhu ‘anhu) and legislated by ‘Alī (radiyAllāhu ‘anhu), is the same Qur’ān you and I have with us today. Indeed Allāh tells us:

“Verily, I revealed this reminder and verily I will preserve it” [5]

We should also reflect and see this as a reminder that Allāh is reminding us that the solution to all our problems is with the Qur’ān – a book that transformed the world from darkness to light. Let us remember that at one time, this Qur’ān created a generation—the generation of the Companions (radiyAllāhu ‘anhum)—without comparison in the entire history of man.

Another message which can be read in to this is that Allāh is reminding everyone that the Qur’ān and Islām has stood the test of time and remains a powerful voice today as it was then and that Islām had during that period seen off many challengers and remains.

Some may say that this discovery was intentionally publicised the day after Cameron’s speech which provoked an unprecedented level of outspoken criticism from the community [6], to distract us away from his blundering “plan” against so-called “extremism”. Whilst it is only speculation, had this indeed been the intention, all the more reason to reflect on the irony, relevance and Divine subtlety of the verses to be seen on the discovery.

Non-Muslims in Britain should too reflect that not for naught has Allāh caused this discovery to be made in this country and by the grace of Allāh I have no doubt that many will be guided to the light of Islām with this discovery much to the annoyance of Cameron and his cronies.

As for Cameron and his clique, let them decide whether they want to follow the example of Fir’awn who was heedless of Allāh’s signs and was caused to be ruined, or will they follow the example of ‘Umar (radiyAllāhu ‘anhu) who became Muslim after having heard the verses noted above of Sūrah Tā Hā being recited and went on to become one of the greatest men in the history of the earth.