Can we trust the judges? 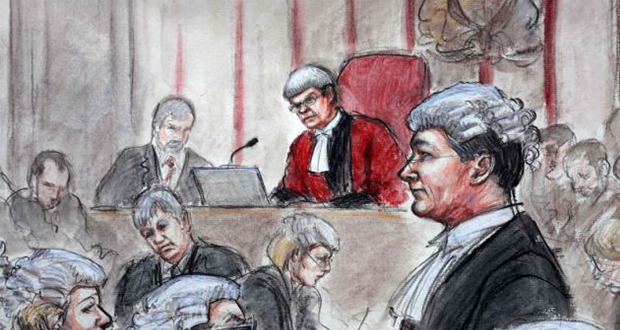 Can we trust the judges?

The alleged increase in the threat of terrorism has led to an erosion of civil liberties.[1] Successive British governments have implemented measures which infringe upon the most basic rights. What is the best method to protect the rights of the individual in an atmosphere of heightened fear and an increasingly draconian security state? Might judges be the shield of the rule of law?

All laws should be compliant with the rule of law and due process. Judges are best placed to ensure that when the executive passes a law which is contrary to such norms, they can rule such laws inadmissible. The courts should exercise increasing judicial activism in light of the various arbitrary terrorism laws which the elected arms of the state pass. Rather, we have a state of affairs in which judges exercise judicial deference to the executive and the legislature.

Judicial scrutiny should be exercised in the most vigorous manner to ensure that rights are not derogated away from unnecessarily. Judicial activism should replace judicial deference to ensure that judges uphold the rule of law and enforce due process.

Why are judges important?

The common law system in England and Wales is one of the primary legal principles which underpin the judicial system. Judges have developed many laws on a case by case basis where the lower courts are bound by the opinion of higher courts, this is known as precedent. For example, murder is a crime established by common law. Therefore, their law making capability is as important as an act of Parliament.

Judges are also the arbiters of a trial. As we have an adversarial justice system, where opposing sides present their arguments and evidence, judges will direct the jury on the law and its application. If the defendant in a case is judged guilty by the jury, it is the judge who passes the sentence. The judge will use their experience and knowledge of the law to impose a punishment, taking into account any aggravating and mitigating factors. These roles highlight the importance of judges in the criminal justice system.

Judicial activism: the best method to protect the rule of law and due process

To ensure that the rule of law is shielded, it is vital that there is a cogent system in place. The separation of powers between the executive, legislature and judiciary was regarded as the principal way to ensure that the different branches of the state did not have too much power and that each branch would check and balance the other.

However, there is no strict separation of powers in the United Kingdom. Therefore, we have to look to other methods to ensure that the different branches of the state do not wield too much power. [2] Might we look to judges to defend the rights of citizens?

Judges are unfortunately subservient towards the executive when it comes to the issue of security, none more so when there is purportedly a greater danger of a terrorist attack.[3] This attitude is worrying and is best exemplified by the stance which Lord Justice Brooke took in the A and Others v Secretary of State for the Home Department,[4] in the Court of Appeal when he said,

“…it seems to me inevitable that the judiciary must be willing, as SIAC[5] was, to put an appropriate degree of trust in the willingness and capacity of ministers and Parliament. If the security of the nation may be at risk from terrorist violence, and if the lives of informers may be at risk, or the flow of valuable information they represent may dry up if sources of intelligence have to be revealed, there comes a stage when judicial scrutiny can go no further.”[6]

However, in the House of Lords, it appeared that judges reasserted themselves when they curbed the powers of the executive. They judged that indefinitely detaining foreign suspects who were accused of terrorism was unlawful.[7]

Nevertheless, the significant decision in Belmarsh did not lead to a transformation in attitude by the judiciary. Conversely, judges still recognised that on matters of national security, the elected branches of governments should take such decisions and the courts would respect that fact. Even though the Law Lords had ruled against the government in Belmarsh, it still declared that the executive would be given “an appropriate degree of latitude”[8] and would give their opinions more weight in terrorism cases.

There are a number of reasons why judges have the ability and power to curb the government’s constant infringement on civil liberties. Firstly, judicial deference has been provided to the executive on the basis that judges do not have the relevant expertise in security affairs. The judges argue that they defer matters of national security to the government based on the information they have from the intelligence services.

Yet, this is ostensibly a false dichotomy. Rather, judges are called upon to rule primarily on matters of procedure. Ruling on such matters requires a legal analysis which judges are more than capable of. Judges should not cloak the procedural legality dispute under substantive security concerns.

Secondly, deference from judges occurs because political matters such as security policy are an issue of politics. As members of the executive are elected officials, derived from the legislature, they are held accountable to Parliament and also the electorate. However, the accountability of the executive by the public regarding security issues is unlikely. When there is an increased awareness of a terrorist attack, the public fear increases. This heightened perception will allow the government to pass harsher counter terrorism laws with little protest from the general public.

Even if the public protest austere measures, this would unlikely change anything until the next election. By then the measures will have been adopted and enforced. In contrast, judges are in a far more influential position to make a change as they can effectively rule a law incompatible with human rights norms.

Thirdly, judges have deferred to the executive to ensure the government can successfully protect the wider public. This utilitarian approach will invariably lead to abuses. However, civil liberties exist to protect individuals from the coercive power of the state. A Kantian argument this may be, but the autonomy of one citizen should never be infringed upon in the name of national security. Judges need to protect citizens from the arbitrary nature of the state.

Lastly, judges have conceded their position as a sufficient judicial check on the executive’s law making ability in times of emergency. Judges feel this power should be reduced as the executive has to make tough decisions during a time of crisis. However, if there is a time of emergency, this is when courts have the most significant role to fulfil. If the government wishes to derogate from a derogable right, it can only do so in a proportional manner and when it is necessary.

Judges should fulfil their role as a check on the executive and ensure they adhere to civil liberties. When states seek to derogate from the norms of due process and the rule of law, judges should exercise their function in the most critical fashion. The threshold to allow derogations should be high. If there are greater infringements in the name of national security, there should be greater justification by the executive and therefore the role of the judiciary in this instance is also greater.

All measures stemming from derogation has to be grounded in law and should not occur unilaterally from the executive. The limitations of the degree and amount of time that a derogation is used should be curbed by judges and adhere to the Article 15 (1) of the European Convention on Human Rights provision of only occurring in “the exigencies of the situation.” In order to comply with Article 15, powers cannot be used in a continuous fashion, and can only be used in a proportional and justified manner.

However, in order for judges to rule whether derogation is justified they would need the necessary information to make a judgement. Unfortunately, the availability of such details from the shadowy world of the clandestine services is not readily available. Openness and transparency is a vice not a virtue of the intelligence services. Therefore, the debate surrounding whether a new terrorism provision is required is seldom feasible. Judges should make the government give sufficient reasons when it would like to derogate.

Why should this concern the Muslim community?

Since the advent of the War on Terror, the Muslim community has largely been silent on many of the capricious sentences which have been handed down to their fellow Muslims in so-called “terrorism” trials. The most recent of which was Anis Sardar who was sentenced to 38 years in prison for the murder of a US service personnel, Sgt Randy Johnson in Baghdad.[9] This was even though there was no causal link between Sardar to the bomb that killed Johnson.

It appears that David Cameron’s recent speech on tackling “extremism” [10] seeks to criminalise normative Islamic theology and jurisprudence such as belief in a state with an adherence to the Shariah or views on sexuality.[11] This speech marks the next stage in tackling so-called “Islamist extremism”; some may even say Islam itself. The increasingly intrusive and invasive nature of counter terrorism laws will affect almost all of the Muslim community, and we could be subject to arbitrary sentencing from judges.

Judicial deference unfortunately continues to be the order of the day. This worrying trend has been accentuated by notable human rights lawyer Gareth Pierce. She recently stated “We are in a similar place to the IRA trials. If you look at them, it was English juries, English prosecutors and English police proceeding with complete ignorance of culture or religion.”[12] Referencing Sardar’s trial she said “This trial proceeded amid complete ignorance, and it was utterly wrong to prosecute and wrong to convict him.”[13]

One may argue that precisely this type of ignorance as a result of fear and hysteria of “terrorism”, has led to the gross disparity between sentences given out to Muslims and non-Muslims accused of crimes. We have a system where Anis Sardar—despite not having harmed anyone as his prosecutors admitted—gets a longer sentence in the UK than murder. This same ignorant, hysterical context has also given out an almost six-year sentence to a Muslim mother-of-six[14] who “glorified jihad” on Facebook, whose picture of her toddler holding a toy gun was somehow newsworthy, yet gave a two-year sentence to a white, far-right British soldier who made a nail bomb in his house. [15] The list goes on.

For too long, judges have deferred to the elected bodies of government when new terrorism measures are introduced. This deference has been performed by judges on the grounds of national security. However, judges should exercise more activism when they act in a judicial capacity. Judges fulfil an important public function. To ensure justice is achieved for all, including the Muslim community, they should be educated about the Muslim community. They should also fulfil their role as a check and balance on the executive and truly be the shield of rule of law.

[2] It should be noted that the United States of America has a strict separation of powers, yet the executive has undermined civil liberties in the name of peace and security. See Norman Abrams, “Developments in US anti-terrorism law: checks and balances undermined” [2006] 4 JICJ 5 at 1117

[3] See Oren Gross and Fionnuala Ni Aolin, “From Discretion to Scrutiny: Revisiting the Application of the Margin of Appreciation Doctrine in the Context of Article 15 of the European Convention on Human Rights” [2001] 23 HRQ 625-49, at 640

[7] A and others v. Secretary of State for the Home Department [2004] UKHL 56 otherwise known as Belmarsh