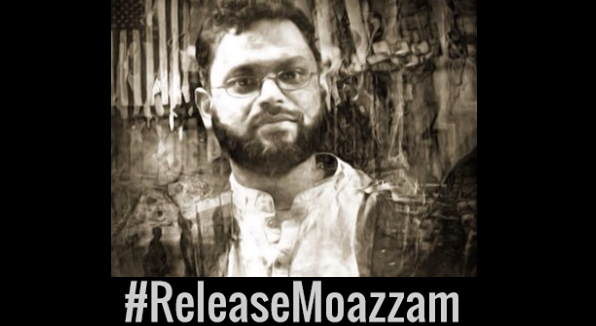 “Sometimes knowing too much can be a curse.”

This was the last Facebook post before Moazzam Begg, Outreach Director for CAGE, was arrested by West Midlands Police yesterday, in what will most certainly be one of their biggest PR disasters to date, in shā Allāh.

Moazzam has been campaigning for years to highlight the breaches of human rights, due process and rule of law that have characterised many western governments since the War [of] Terror began.  As a result he has suffered much abuse and harassment by certain institutions within the Establishment, which he wrote about recently[1].

(London) CAGE is outraged by the arrest of our Outreach Director, Moazzam Begg. A former Guantanamo Bay detainee, he has been campaigning for due process and the human rights of victims, despite suffering over three years of torture and abuse by the US government with the complicity of the British security services.

This latest action is designed to ensure that any travel to Syria is deemed suspicious. It follows a concerted campaign of harassment against Muslim individuals and charities involved in providing humanitarian aid to the victims of the Syrian crisis.  Moazzam Begg is just the latest individual drawn by the humanitarian catastrophe in Syria who has been labelled a terrorist. The purpose is to intimidate and vilify the wider Muslim community so that they are prevented from delivering much needed aid to the Syrian people.

Moazzam is an internationally recognised figure on issues relating to due process and human rights. His advocacy on behalf of the Guantanamo Bay detainees has been recognised across the world, resulting in various governments accepting detainees who could not be returned to their countries of origin.

“Moazzam has been very open about his international travel and his objectives, including importantly exposing British complicity in rendition and torture.  The timing of Moazzam‘s arrest given his travel to Syria took place in December 2012 requires a detailed explanation. The timing coincides with the planned release of a CAGE report on Syria and a major news piece that was due to be televised soon. As with David Miranda it seems those who are engaged in exposing abuse of powers are targeted and smeared to prevent disclosure of vital evidence.”

“We are also concerned that the Police and the security services are using the wide scope of terrorism laws, and applying them in Syria to set precedents that will make legitimate activity unlawful in future.”

“CAGE calls on all defenders of civil liberties and the rule of law to stand up and protest against the serious curtailment of yet another victim. The message may be unpalatable to those who wish to shroud their abuse in secrecy but that can never justify an attack on the messengers.”

“We are disgusted that Moazzam Begg is being retraumatised with the same guilt by association accusations that resulted in his unlawful incarceration in Guantanamo Bay.  We fully support our colleague and see his arrest as politically motivated and as part of a campaign to criminalise legitimate activism.”

1.     CAGE (formerly known as CagePrisoners) is an independent advocacy organisation that works to empower communities affected by the War on Terror and to highlight abuses of prisoners’ rights.

2.     For further information on our work on Syria, please refer to these articles by Moazzam Begg:

NOTES: the press release within this article has been taken from http://www.cageuk.org/press-release/press-release-moazzam-begg-arrested-uncovering-western-complicity-rendition-and-tortur