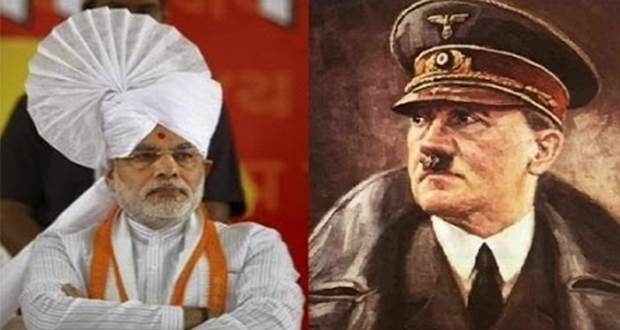 The victory of Narendra Modi in the last Indian elections sent shockwaves through the world, not only because of his close ties to the fascist-inspired RSS but also because of his role in the 2002 Gujarat riots which left thousands of Muslim dead in what is widely believed to have been state-sponsored mass murder and rape.

To understand why Narendra Modi is such a controversial figure it is important to look into his political background.

Narendra Modi began his political career in a group called Rashtriya Swayamsevak Sangh (RSS), National Volunteer Organisation. The RSS was founded in 1925 as an educational group to train Hindu men by character-building to unite the Hindu community,]counter British colonialism in India, and suppress Muslim separatism. Since its foundation it has espoused a nationalist agenda. The group drew inspiration from European right-wing groups during WWII.

Some of the most prominent figures of RSS deeply admired Fascism and Nazism, the two totalitarian movements that swept through Europe at the time. Naturam Godse, the man who assassinated Gandhi in 1948, was himself a former RSS member who felt that the Mahatma made too many generous concessions to the Muslims.

It was banned by the British Raj, and then thrice by the post-independence Indian government — first in 1948 when the aforementioned member of the RSS, Nathuram Godse, assassinated Mahatma Gandhi; then during the emergency (1975–78); and after the demolition of Babri Masjid in 1992, where concurrently thousands of Muslims and hundreds of mosques were destroyed in an orgy of violence and hate by the RSS, which culminated in the destruction of The Historic Barbari Mosque. The bans were subsequently lifted. This is a pattern which would later be repeated in Modi’s state of Gujarat where the courts and police would collude to exonerate the perpetrators of violence against minorities.

The RSS admired the way Mussolini and Hitler reorganised their respective nations so quickly from the wreckage of war to build a powerful economy and military under the banner of patriotism and nationalism. [1]

With respect to Hitler and Nazism, the links to India and Hinduism were deeper and more profound.

Much of Nazi ideology and imagery came from the symbols and history of ancient India – indeed, the infamous Nazi swastika was based on a Hindu symbol of strength and good fortune.

During World War II, some Indian nationalists received explicit support from German Nazis; in fact, some Indian soldiers even served in Hitler’s armies and in the notorious SS.

A senior RSS member, Madhav Sadashiv Golwalkar, praised Nazism and believed the ideology should be applied to India.

“German race pride has now become the topic of the day,” he wrote.

“To keep up the purity of the race and its culture, Germany shocked the world by her purging the country of the Semitic Races — the Jews. Race pride at its highest has been manifested here. Germany has also shown how well-nigh impossible it is for races and cultures, having differences going to the root, to be assimilated into one united whole, a good lesson for us in Hindustan [India] to learn and profit by.”[2]

Golwalkar enthusiastically advocated for an India dominated by Hindus.

“That is the only sound view on the minorities problem. That is the only logical and correct solution. That alone keeps the national life healthy and undisturbed… The foreign races in Hindustan must either adopt the Hindu culture and language, must learn to respect and hold in reverence Hindu religion, must entertain no idea but those of the glorification of the Hindu race and culture, and must lose their separate existence to merge in the Hindu race, or may stay in the country, wholly subordinated to the Hindu Nation, claiming nothing, deserving no privileges, far less any preferential treatment not even citizen’s rights.”[3]

If one were to replace “Hindu” with “German,” Golwalkar’s words would match Hitler’s rhetoric almost exactly. It is also strikingly similar to the rhetoric espoused by the neocons in Europe today.

After the defeat of Fascist Italy and Nazi Germany in World War II, Hindu nationalists distanced themselves from the totalitarian regimes of Europe.

However, their calls for a “Hindu” India have only strengthened over the years. In the present climate, the RSS and BJP are both generally opposed to the Muslim presence and express extreme hostility toward India’s principal Muslim rival, Pakistan.

Narendra Modi’s Rise in the RSS and BJP

Narendra Modi started his political career literally in the gutter, sweeping and washing for the local RSS boss; however he quickly rose up the ranks, gaining a reputation as an efficient organiser. By the late 1980s he had become a senior figure in the RSS’s Gujarat chapter. From here, he was given the job of liaising with the Gujarat BJP and before long had moved across from the RSS into its political wing.

In 1990 he helped organise the Gujarat leg of the Rath Yatra chariot march on Ayodhya from the great Hindu temple of Somnath, a campaign in which Modi played a crucial role. The campaign led to the destruction two years later of the Babri Masjid.

By 1998 when the BJP took power in India, Narendra Modi was rewarded for his work by being promoted to serve as the BJP’s national secretary. He moved to Delhi and began to work on converting himself into a recognisable national politician.

By 2001 he had managed to become the chief minister in Gujarat where, within months of his appointment, the mass murder of Muslims began. Modi used his period in power in Gujarat consolidated by post-Gujarat-riot electoral success to court big businesses and corporations. The growth rate in Gujarat averaged double figures during his term, and eventually using that as political capital he was elected Prime Minister of India by the middle classes during an economic slump.

Yet he remains controversial, not for his lifelong loyal membership of the fascist RSS, but the planned genocide, according to Amnesty international as well as many other human rights organisations, in Gujarat.

Former President of India, President Narayanan said: “There has been government participation in Gujarat riots. I had sent several letters to the then Prime Minister Atal Behari Vajpayee, and also talked to him. But he did not do anything effective.” Former President Narayanan said he had directed sending in the army to Gujarat to stop the violence. “How many instances of the serial killings could have been avoided if the Army had resorted to shooting against rioters? The slaughter could have been avoided if the Army was given the freedom to stem the riots.” [5]

In the three days following the fire that sparked off the riots, the Sangh Parivar, with the knowledge of Modi and his cabinet[7], masterminded a campaign of targeted, anti-Muslim violence across Gujarat, in which 16 of 24 districts were affected. [8] Some of the worst violence occurred in rural areas hundreds of miles from the initial incident at Godhra, the fire in coach S-6 of Sabarmati Express on February 27th 2002, which killed 59 people and led to the Gujarat riots, which was later found to be accidental according to the Banerjee Report.Moreover, subsequent investigations [9] found that only Muslim-owned businesses were destroyed. Inventories of Muslim businesses, including hotels with Muslim partners, and Muslim residences were made available to the mobs by BJP, Vishwa Hindu Parishad (VHP), Bajrang Dal leaders and cadres, and the Gujarat State Police[10], as were voter registration lists/electoral rolls that aided in the targeting of Muslims in mixed, or dominant Hindu neighbourhoods.

Subsequent forensic investigations have established that Coach S-6 of the Sabarmati Express could not have been set on fire from the outside on February 27th 2002, and that the fire that destroyed compartment S-6 started from within the train compartment. The interim report of the Justice U. C. Banerjee Commission, released on January 17th 2005, has concluded that the fire in Coach S-6 of the Sabarmati Express on February 27th, prior to the mass killings which ensued on February 28th, was “accidental,” and not a “terrorist” attack on Hindu pilgrims as claimed by Narendra Modi and other Hindutva leaders in their attempt to justify the violence that followed. [11]

Various investigations (listed in earlier footnotes) have inquired into the precise nature of the genocidal violence used by Hindutva mobs [12] to target Muslim communities in Gujarat. Fact-finding teams have concluded that, based on the reach and impact, the implementation of violence that occurred, including across the districts of Ahmedabad, Dahod, Gandhinagar, Kheda, Mehesana, Panchmahal and Sabarkantha, between February 28th and March 2nd, must have been premeditated and could not have erupted spontaneously. These investigations have asserted that Narendra Modi, as the head of state of Gujarat, not only failed to take preventative measures against those who were planning the violence with his knowledge, but undertook a series of measures that either tacitly or explicitly condoned the violence.

The Gujarat massacre was pre-planned and the state government of Gujarat was complicit and culpable at the highest level.

The Modi government in Gujarat is responsible for the deaths of thousands of its citizens in instances of organised violence, large-scale displacement of its minority populations, continuing denial of justice and the climate of terror that permeates civil society in Gujarat even today.

Based on a report: Genocide in Gujarat, The Sangh Parivar, Narendra Modi, and the Government of Gujarat.

What does this mean today?

David Cameron extended his congratulations to Narendra Modi on his victory in the elections and expressed his desire to work with him. With the rise of the far-right in the UK and the undercurrent neoconservative politicians giving a slackened leash to this dangerous ideology, it seems expectant for Cameron to make such expressions towards a fascist who has blood on his hands. To believe Modi to not pander to his roots would be naïve.

In Pune weeks after Narendra Modi was elected, a young Muslim man returning home from prayers supporting a topi and beard was beaten to death, by members of an extremist Hindu outfit Hindu Rashtra Sena. The killers exchanged the following message after killing Shaikh which read, ‘Pahili wicket padli’ (The first wicket has fallen). [14]

The suspects, who are between the ages of 19 and 25, are members of the Hindu Rashtra Sena, a fringe Hindu-nationalist group, said Mr Rehman, a local resident. The men couldn’t be reached and the police said they didn’t yet have legal representation. They have been accused of murder but haven’t been formally charged. A spokesman for the group couldn’t be reached to comment. [13]

Understandably this has led to fear in the Muslim community where, men are now shaving their beards and no longer wearing clothes that will demark them as Muslims. [15]

Zaraful-Islam Khan, head of the All India Muslim Majlis-e-Mushawarat, an umbrella organisation of Muslim groups based in New Delhi, blamed Mr Shaikh’s death on a sense among hard-line Hindu groups that they could act with impunity after the elections.

“They must receive a strong warning from the government that this will not be tolerated,” Mr Khan said.

If Mr Modi’s administration doesn’t act forcefully, it “means dark days are ahead.”

Cross-posted from Coolness of Hind