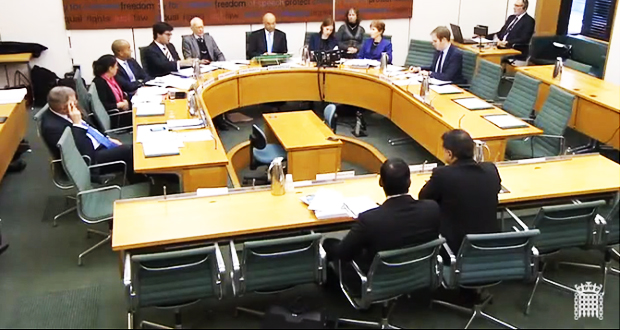 Quilliam Foundation grilled as select committee exposes their extremist links and questions credibility. The video of the hearing can be found here on parliament.tv

The notorious Quilliam Foundation (QF) is no stranger to controversy, but Tuesday’s hearing in front of the select committee was more than they bargained for or were accustomed to. Thoroughly researched MPs on the Home Affairs select committee grilled QF on troubling concerns which many have held for years about QF. The grilling covered the following.

The committee challenged QF as to why they signed a statement with the Islamophobic Gatestone Institute,[1] an organisation obsessed with Islamophobia and whose online contributors include the infamous Robert Spencer. Spencer runs the right-wing Jihad Watch website.[2] A 2011 report by the Center for American Progress,[3] found that Spencer and his website Jihad Watch had been cited 162 times in the manifesto of Norwegian terrorist Anders Breivik, who massacred 77 people in 2011. Spencer himself was banned from entering the UK by the government as his presence was ‘not conducive to the public good’.[4] He was due to address an EDL gathering.

QF appointed Chad Sweet to its US board of directors for two years from 2011. Naz Shah MP reiterated this quote from Dr Nafeez Ahmed’s essay exposing Quilliam in the US,[5]

Chad Sweet’s political hero is an unabashed white supremacist sympathizer (sic).[6] In late 2013, at the Heritage Foundation, the Texas senator declared his life-long admiration for the late senator Jesse Helms, a bigot who advocated continued racial segregation, rejected the Civil Rights Act as “the single most dangerous piece of legislation ever introduced,” dismissed the University of North Carolina-Chapel Hill as “the University of Negroes and Communists,” and described gay people as “weak, morally sick wretches.”

In light of the above, Naz Shah MP then put it to QF:

“Would you agree that such alliances at the heart of Quilliam Foundation strip it of all credibility when it comes to dealing with tackling Islamophobia?”

The select committee also quoted Professor Matthew Goodwin, who until very recently served on the Government’s working group on anti-Muslim hatred. He said of QF,

“Nor to my knowledge did the government engage with any researchers who specialise in radicalisation. Instead, the taskforce consulted widely with the Quilliam Foundation, a thinktank that, some say, lacks credibility with many ordinary Muslims, pushes theories of radicalisation that are typically not supported within the academic community, and undertakes research that is seldom subject to rigorous peer review.”

It is hard to find any serious security expert taking QF’s counter extremism work seriously. Many academics have also expressed grave concerns with QF’s theories. Worst of all, perhaps, is the total lack of credibility QF have amongst British Muslims, the very community supposedly benefiting most from their work. Go to any mosque or Muslim community Centre in the UK and mention QF – you will receive a universal disapproval bordering on hostility.

‘When in doubt, deny all knowledge’ seems to be QF’s approach to challenging questions. Indeed, every time Haras Rafiq of QF was posed a tricky question he seemed to have no answer and reverted only to ‘pleading ignorance’ each time. Take for instance the Robert Spencer and Gatestone link, Rafiq claimed he was not even aware Spencer was a contributor to Gatestone’s website. It got better as when Professor Matthew Goodwin’s quote was read out to Quilliam, highlighting QF’s alleged lack of counter terrorism expertise and their lack of credibility in Muslim spheres, Rafiq claimed that the government’s working group on anti-Muslim hatred had never been in touch.

The icing on the cake though was surely when the committee pressed Rafiq on QF’s links to extremists in the US. Rafiq had the audacity to totally distance Quilliam’s US operation to the UK one, essentially claiming that they were completely different outfits. How depressing that the Select Committee, short on time, did not probe this point further; surely in the inter-connected world we live in, the same organisation across two different countries cannot divorce its theory or extremist connections from each other. In an essay, How violent extremists hijacked london based counter extremist think tank,[7] Dr Nafeez Ahmed exposes clearly, using public records, the connections between QF’s UK and US operations.

QF’s total inability to answer any of the allegations posed against them resulted in Chuka Umunna expressing his frustration at Quilliam and asking whether they can see why they lack such credibility.

Not content with defending the indefensible, QF also went on the attack claiming MCB had signed the controversial ‘Istanbul Declaration’,[8] and worse still supported anti-semitism. It is a matter of fact that Dr Abdullah in his personal capacity signed the Istanbul statement, not MCB. As for the anti-semitism allegation, I suspect it had MCB either scratching their heads or calling their lawyers – we have not heard the last of this I think. They also repeated the false accusation that Shaikh Dr Haitham al-Haddad supported Female Genital Mutilation, which has been debunked in the past as a useful tool to demonise Muslim activists.[9]

Naz Shah MP started her questioning by informing QF of the decision of the Bradford Council of Mosques to reschedule their hearing with the select committee due to their desire not to share a platform with Quilliam. BCM felt that Quilliam lacked community credibility and did not wish to share a platform. Perhaps BCM felt it would damage their own credibility being on a panel with QF. BCM stated regarding QF in a letter to the Select committee:

Perhaps the most dangerous revelation of the night was Haras Rafiq’s admission that Quilliam ‘mentors’ youngsters on the Government’s ‘Channel’ programme. Quite aside from QF’s links to extremism, Islamophobia and a general lack of credibility, as commented on by the select committee; more troubling are the antics of Quilliam’s poster boy Maajid Nawaz who as many know was caught during Ramadan,[10] drunk, in a Strip Club groping a young woman. Are these the sorts of people Channel is using to serve as mentors to young Muslims? If so, nobody will be surprised if their mentoring achieves nothing and perhaps turns out to be even counter productive.

One final point worthy of note was Haras Rafiq’s claim that QF had been contacted by ‘Jame-Ahle-Sunnah’ (allegedly an organization with 600- 800 mosques). The title Jame-Ahlie-Sunnah is of course a generic title used by many Muslim organisations and individuals to define their ideological stance. Haras will no doubt come under pressure to be more specific about precisely whom he is referring to and indeed whether the party in question (assuming it exists) really did request any assistance from Quilliam. Haras also claims Quilliam has a vast outreach programme with a number of societies at universities and that they visit schools regularly and run workshops. Precious little media coverage is available on this ‘vast’ outreach programme, raising further doubts over Mr Rafiq’s assertions.

In light of the above shocking evidence, it is difficult to see how Quilliam can maintain a position on Cameron’s Community Engagement Forum when they are clearly linked to extremists themselves and lack Muslim community credibility. One really wonders how much the PM really knew about Quilliam before inviting them on board.

The video of the hearing can be found here on parliament.tv