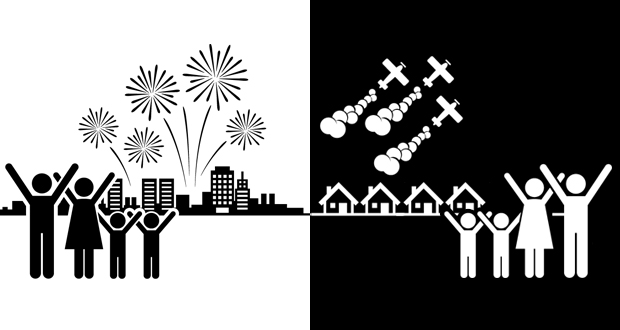 Anyone with a passing acquaintance with neocon ideology is well aware of the formidable feats of moral gymnastics used to justify perpetual war and endless conflict abroad. Yesterday’s ten-hour-long “debate” in the House of Commons saw a barrage of rehearsed recitations on the need for dropping bombs on Syria, which according to apparently the whole world apart from the Westminster village and securocrats, is a move guaranteed to increase terrorism.

Among the litany of invocations neocons use to justify military adventures abroad which, by fortunate coincidence, happen only to enrich Western arms corporations many of them are linked to, is Bosnia. Bosnia is frequently raised by neocons and their apologists to give a rare example of ostensibly ‘moral’ Western intervention in the past, since the rest of their adventures have been so unambiguously humiliating. They also use the example of Bosnia to “prove” they are not anti-Muslim. It is often cited by those who work in the British counter-extremism industry as “deradicalisation mentors”, as an example demonstrating Western benevolence towards Muslims. As such I feel it is worth analysing.

It should be noted that neoconservatives did indeed support an aggressive intervention in Bosnia.  However, consideration for Muslims was not the primary aim.

The Bosnian intervention fitted the strategy of neoconservatives in that it fulfilled a number of their philosophic and political objectives:

Exercising statecraft to enable the second point below.[1]

The reciprocal impact of neocon foreign policy at home in that it provides an “antidote” for liberalism,[2] which in the context of US politics refers to what we would call socialism.

Projecting power abroad free of principles which weaker states are bound by.[3]

Forcing the support of a new norm in the international legal landscape for “humanitarian interventions” (defenestrating established legal basis) which would be used in later wars.

Promotion of democracy and American values abroad (due to it being the domineering thought in the West) as symbols of its militarism.

I will now touch upon these objectives.

The Primary Strategic Goal of US Intervention in Bosnia

The Bosnian intervention helped neocons promulgate the re-definition of “national interest” and “national security” in foreign policy terms to effectively globalise US militancy, opening the door to Robert Kagan and William Kristol’s American “benevolent hegemony”,[4] and Max Boot’s “Hard Wilsonianism” – a tearing up of international order and aggressive warring subservient to the interests of a few.[5] For the likes of Morton Abramowitz, Jeane Kirkpatrick and Richard Perle, the status of NATO and its credibility was of primary strategic concern.[6] Perle for instance wrote in 1994,

“If NATO proves incapable of acting with resolve, it will soon become irrelevant in the post-cold-war world.”[7]

NATO felt shackled by the UN and the Serbs were exposing NATO’s “weakness” to act. Europe, including the UK, did not have the stomach for assertive military action. A key emerging concern was the increasingly Islamic approach of the Bosnian resistance, reinforced by the inactivity of the international community. The fear of Islam with military support in the heart of Europe was a fundamental concern. The Organisation of Islamic States at that time also offered to replace the discredited Western UN forces. At a NATO meeting in December 1994, French Defence Minister Leotard claimed a UN-pullout “would bring Islamic forces into the area”.  In 1995, NATO Secretary-General Willy Claes said that,

“Islamic militancy has emerged as the single gravest threat to the NATO alliance and to western security”.[8]

An opportunity opened for the US to primarily re-assert NATO’s credibility to demonstrate, suppress overt Islamic self-determination and ultimately enforce US leadership and power.  Kagan notes in his book,

“For the United States, preserving the cohesion and viability of the [NATO] alliance was not just a means to an end in Kosovo; it was among the primary aims of the American intervention, just as saving the alliance had been a primary motive for America’s earlier intervention in Bosnia, and just as preserving the cohesion of the alliance had been a primary goal of American strategy during the Cold War.” [9]

“As in the Cold War, America fought in the Balkans ultimately to preserve “the West.” And that goal determined American military strategy. As [American NATO Commander] General Clark puts it, “No single target or set of targets was more important than NATO cohesion.”[10]

Projecting and Maintaining Global US Power

When European dithering was coupled with the threat of potential European destabilisation, a further dominant reason became (as it always has been for neocons) about projecting and maintaining power.[11] [12] Norman Podhoretz, for instance, argued at that time that not deploying troops would do “grave damage to [US] power and to its honor”.[13]

“For the United States as a world power, the problem of Bosnia is, and always has been, about more than Bosnia. It has been about America’s will and capacity to use its power effectively to maintain a stable and secure Europe, which in turn is the essential foundation for maintaining a world order conducive to American interests and ideals.”[14]

Indeed, some have argued that the purpose of the nineties for the neoconservatives was to maintain what neoconservative columnist Charles Krauthammer would allude to as the US’ “unipolarity” of power in every region in the world. [15] [16]

US strategic interests – not Muslim suffering – made up the raison d’être of the Bosnia intervention.

There was another interest which is often ignored in the Bosnian conflict: financial. Of the key neocon proponents of war in the Balkans were those who profiteered from its inevitable escalation caused by NATO bombing.

No sooner did Dick Cheney take the reins of Halliburton in 1995 that its subsidiary won major Pentagon contracts to provide logistical support services for US troops reaping over $2 billion. Major Joe Bigelow, spokesman for the Army, noted,

“The current administration helped set the course for them to build the business… Five years ago there was no Bosnia or Kosovo.”[17]

The notorious war profiteering corporation is not the only one.

A few years after Desert Storm, a “Bosnia Defense Fund” was set up.  Millions of dollars came from various countries to buy weapons and military training from US private security firms like Military Professional Resources Inc. for Bosnians. According to investigative journalist Wayne Madsen, the fund was established by extremist pro-Israel neocon Douglas Feith, his Israeli-American partner Marc Zell through their law firm Feith and Zell, with the assistance of Perle.[18] Both Feith and Perle would later become “advisors” to the Bosnian delegation at the Dayton Peace talks.

The War in Bosnia also suited neocons aims of dealing with the excesses of liberalism, which—it should be kept in mind—in the context of US politics and therefore neoconservatism refers more to what we call socialism. One of the key areas of focus for Washington-based neoconservative think-tank, the War on Terror-advocating Project for New American Century, was to focus on modifying domestic conservativism. According to Kristol, who was the founder of PNAC, the short-term task during the nineties was to “contain” liberalism, whilst the long-term task was to “transcend it”.[19] Kristol’s solution for this “remoralisation of America” is war.  Kristol and Kagan’s influential essay published in 1996 was emphatic in this regard:

“Indeed, American conservatism cannot govern by domestic policy alone… it is hard to imagine conservatives achieving a lasting political realignment in this country without the third pillar: a coherent set of foreign policy principles that at least bear some resemblance to those propounded by Reagan. The remoralization of America at home ultimately requires the remoralization of American foreign policy.”[20]

The call for war in Bosnia fulfilled Kristol’s domestic objectives.

The precedent created through the Bosnia intervention has been invoked by neocons variously to justify imperialism and more warring. Noting the ability of the US to “leverage” Bosnia, Max Boot, in an article justifying “state building” and “regime change”, cited Bosnia as a successful form of US imperialism:

“U.S. imperialism–a liberal and humanitarian imperialism, to be sure, but imperialism all the same–appears to have paid off in the Balkans.”[21]

The former executive director of PNAC, and current resident scholar and co-director of the neoconservative American Enterprise Institute, Gary Schmitt,[22] in September 2013 drew similitudes between the civil war in Syria and Bosnia, reproducing an email from a French defence analyst which noted that it was NATO intervention “that proved key in ending the war”.[23] By September 2014 the US and allies launched airstrikes in Syria.[24] Two years on, and ironically in the words of Schmitt, “tens of thousands have died, innocents have been brutalized (sic), and massive numbers have been exiled from their homes, towns, and country”.

It should be noted that whilst the concept of broadened, internationalised national interest was broadly agreed upon across the neoconservative spectrum, the consensus was not shared when it came to the intervention in the Bosnian crisis. Certain strands like Charles Krauthammer (and Francis Fukuyama) opposed any intervention for Bosnia because it was believed the US interests were not at stake and Bosnia would in fact damage NATO credibility.[25] In other words, Bosnia was bad, but it did not affect US strategic interests. The core reason even in this perspective was not saving Muslims.

Citing one example which ostensibly seems “humanitarian” does not negate the horrendous outlook neoconservatives propound.  Indeed, it was Islamic self-determination itself which was deemed a threat to NATO. If the ending of Muslim suffering was paramount for neoconservatives, they would be lobbying the US and Western states to arm Palestinians and achieve a “balance of power” which they sought in Bosnia and which constituted one of their exoteric reasons for military action. The fact remains that it is their broadly-defined neocon conception of “interests” which determines their “morality” – Muslims served their interests then, but certainly not after the intervention, at least not in a manner beneficial to Muslims. Rather, Muslims now provide for the Machiavellian “bogeyman” that is referenced in the opening comment for them to continue their global militarism, perpetual warfare and fascism-based closed society endeavours at home.

[2] This is discussed the section below, “Containing Liberalism”.

[4] Kagan and Kristol reiterated the discourse of “national interest”, stating that this “interest” should be the “cause of war even when cannot prove that a narrowly construed ‘vital interest’ of the United States is at stake.” See Kagan R.,and Kristol W., Present Dangers: Crisis and Opportunity in American Foreign and Defense Policy, California: Encounter Books, 2000, p.13

[11] The acquiring of power permeates across neoconservative political thinking. American academic C. Bradley Thompson writes, “The pragmatic neocon covets power – or rather the power to acquire power. That is what counts”. See, Thompson/Yaron, Neoconservatism: An Obituary for an Idea, Boulder: Paradigm, 2010, p.37

[12] See Fn.6 pp.41-7. Kagan speaks of America’s unilateralism and Europe’s consternation of American ability to “go it alone” (p.39) at length in his book, especially to the Balkan operations. Kagan’s glee in the following comment is notable:

“To Europe’s most respected strategic thinkers in France, Germany, and Britain, the Kosovo war had only “highlighted the impotence of Europe’s armed forces.” It was embarrassing that even in a region as close as the Balkans, Europe’s “ability to deploy force” was but “a meager fraction” of America’s.” (pp.46-7)