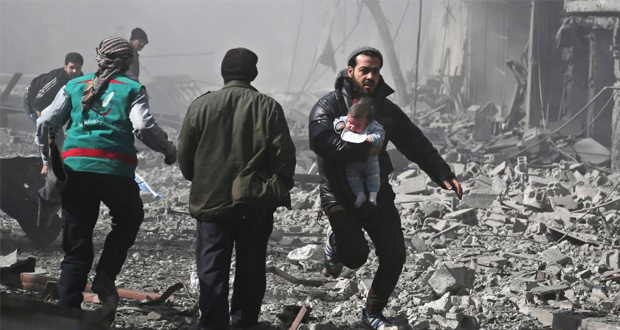 By now, most of us will be familiar with the name “Eastern Ghouta” and of the atrocities taking place there.  We will surely be dreading the worst, imagining it to be the next Aleppo, and asking ourselves how this can be allowed to happen again.

However unexpectedly Eastern Ghouta may have entered into our collective consciousness, the situation there was by no means unforeseeable.  After all, it was the scene of an infamous sarin gas attack in 2013 which was widely reported on at the time. The difference now is that the Assad regime is preparing to take back control of the besieged part of Eastern Ghouta which has been a rebel stronghold.  This has led to the intense bombing seen in recent days and the current death toll which stands at 250 and is climbing.  Chillingly, a commander in Assad’s coalition has warned that:

“The offensive has not started yet. This is preliminary bombing.”

One can only imagine the tragedy and horror of the ‘real’ offensive once it begins, in a location where 200,000 children are trapped with no access to food or medical assistance.[1]

As with Aleppo, there will be no excuse for the world to stand by and say that it did not know what was taking place in Ghouta.  With the terrified and oppressed residents bearing witness to their decimation via social media, the claim not to know what was happening will fall on deaf ears.  Indeed, a voice recording from a resident suffering through the siege has given us a clear and unambiguous account of what they are experiencing. Ghouta has been compared to Srebrenica and the parallels are clear.  Most damning is the fact that, as with Srebrenica, the world knows exactly what is happening and tolerates the Assad and Russian coalition’s refusal to allow humanitarian assistance to the desperate people trapped there.

Modern history is littered with massacre. The Holocaust, Rwanda, Srebrenica, Grozny – the list goes on. Yet, after each tragic event, humanity gathers to promise each other ‘never again’. Successive generations look at those who preceded them and pause to wonder: “What they were thinking?”, asking if the generation prior did not see the violation of women or the murder of children. Yet, Syria is in our time, and we, like many before us, have let our families in faith down.

After reading the title, many will skip this article. Some would have read until now, but few until the end. Even fewer will act upon this article. The Muslim nation has betrayed Syria and is complicit by its silence.

With all due respect, we must ask why so many of our beloved scholars are so quiet on Syria. When was the last time they took to the pulpits to remind us of our duties towards our brothers and sisters suffering? It is sad reality of modernity—and a type of secularism—that many learned men spend much time reminding us on matters of purification or innovation, whilst ignoring the horrors of Syria, Rohingya, Yemen, Iraq, Palestine, and so on. Our beloved scholars, Imāms and leaders have a duty on their necks, it is upon them first and foremost to remind us of the words of our noble messenger (sall Allāhu ʿalayhi wa sallam):

“The similitude of believers in regard to mutual love, affection and fellow-feeling is that of one body; when any limb of it aches, the whole body aches, because of sleeplessness and fever.”[2]

It is upon our scholars to remind us of the sanctity of the blood of our innocent brothers and sisters:

ʿAbd Allāh b. ʿUmar said – I saw the Prophet (sall Allāhu ʿalayhi wa sallam) doing tawwāf around the Kaʿba saying: “How sweet you are and how sweet is your scent. How great you are and how great is your sanctity. By the One in whose Hand is the soul of Muḥammad, the sanctity of a believer is greater with Allāh than your sanctity!”[3]

Our scholars are the inheritors of the Prophets, so they must strive to reflect them. Mūsā (ʿalayhi al-Salām) did not remain in the Palace of Firʿawn claiming to see ‘the bigger picture’. Rather, he was amongst his people as they were trapped between the army of Firʿawn and the endless sea. Muḥammad (sall Allāhu ʿalayhi wa sallam) did not retreat to safety when the people of Madīnah were faced with prospective annihilation during the Battle of the Trench. Indeed, when the battle was at its fiercest the Sahāba would seek shelter behind the Prophet (sall Allāhu ʿalayhi wa sallam) because of his bravery. The ummah does not need more cowards, it is crying out for lions to lead it. It is far better for a lion to lead a herd of cowards, than for a coward to lead a pride of lions.

Ghouta, which has special Islamic significance, has, whilst the world’s attention has been turned elsewhere, been subject to continual aerial bombardment with hundreds killed. 500 bombs have dropped in Ghouta overnight.[4] The streets are empty for fear of the bombs. Those left alive are starving as aid struggles to get in. Some 400,000 people have been placed under siege by the Assad regime for the past 6 years, yet remain defiant.

“Sometimes, my husband and I don’t eat for days to feed our children with the ongoing food shortages.”[5]

White Helmet volunteers have been targeted as they attempt to rescue the injured, whilst the maimed in hospital are bombed together with the doctors. 112 rockets hit the town of Douma in just 3 minutes.[6] The savagery of this war is beyond comprehension.

A voice note from a female resident in Ghouta gives us painful clarity:

“I swear by Allāh we are hungry, we are tired and we are starving. Please help us. Please!”[7]

The suffering in Syria will come to an end. The people of Syria will be victorious. So rather than shed tears for them, we should sob for ourselves, because Allāh (subḥānahu wa taʿālā) said:

“Or do you think that you will enter the Garden of bliss without such trials as came to those who passed away before you? They encountered suffering and adversity, and were so shaken in spirit that even the Messenger and those of faith who were with him cried: “When will the help of Allāh come?” Ah! Verily, the help of Allāh is always near!”[8]

Before our time passes us by there are 5 things we can do for Syria:

It is in fact Allāh in whose hand victory and trials lie, make Him your concern and exert your efforts. He will not question why you did not personally liberate Ghouta or anything outside of your power. What he will question you about is what you did within your power and capability. So never belittle that.