Today Turkey Votes Yes or No 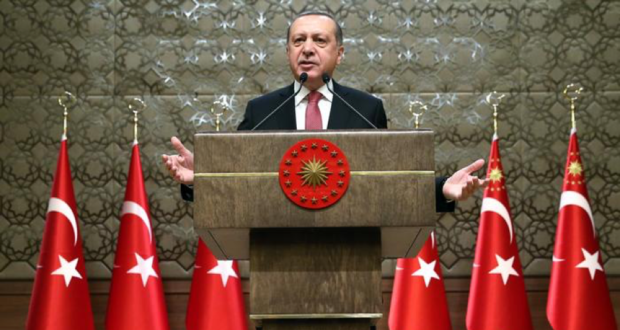 Following the 15th July 2016 coup d’état attempt in Turkey against the legitimately elected government through a majority of the Turkish voters, Turkey and its leadership has been quite vocal against the partiality of some European governments in condemning the illegal coup.

Fast forwarding through many events over the past seven months or so, a referendum is today taking place in Turkey, to transform its somewhat military-dictated constitution, [1] and may, for the first time, allow an Islamic leader to rival the ultra-secularist Mustafa Kemal Ataturk himself. [2] These changes have been approved in the Turkish Parliament,[3] supported by the Government and a significant number of members of the opposition. [4] Today’s referendum will invite the Turkish population to offer their final verdict on this monumental, political shift. [5] Turkish citizens at home and abroad will be allowed to participate. [6] 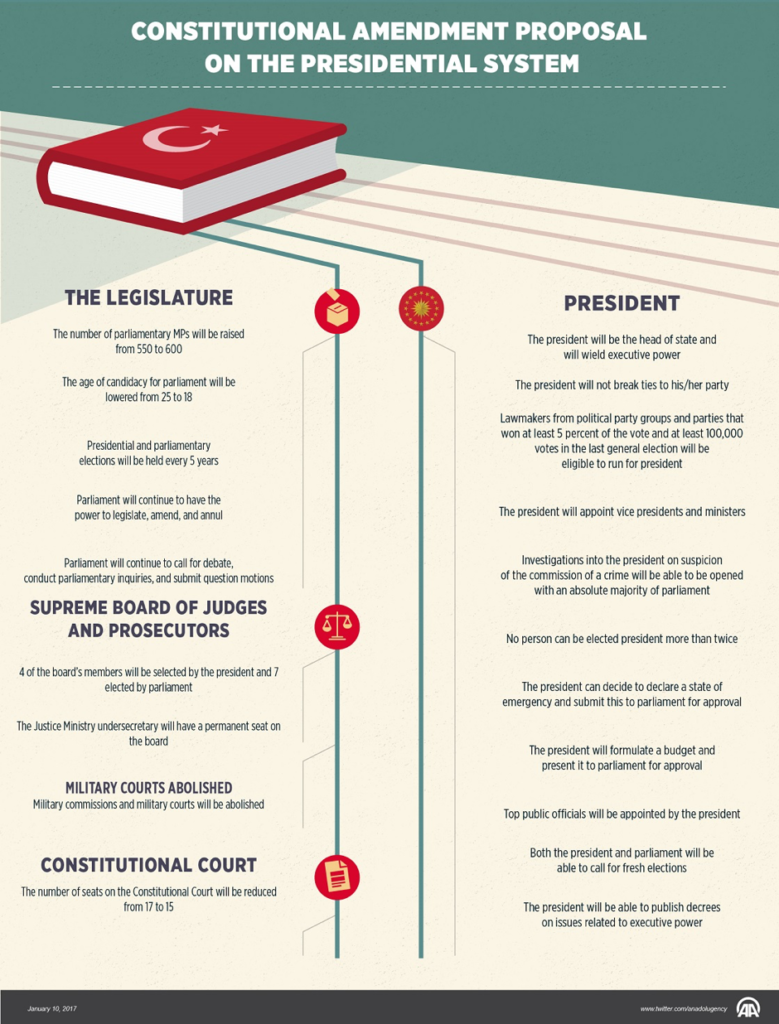 Turkish deputies and ministers have been travelling across Tukey and abroad to convince voters to help pass this constitutional change.

Many in the west believe a ‘Yes’ vote will make Turkey more powerful in the global arena. Surely enough, a ‘Yes’ vote empowers the youth by reducing the minimum age to stand in elections, reduces military involvement in the political processes, encourages diversity by lifting the condition of the president to be born in Turkey, [7] among many other such changes. A ‘Yes’ vote receives the passionate support of the man and a party that has never lost an election since 2001 for its incessant success by the permission of Allah ﷻ.

This says a lot for the Turks. For about the same time, and into this referendum campaign, western media have nit-picked about very few of the changes out of context to no end, dubbing it with yet another loosely defined term ‘authoritarian’, with no care in the world that it follows the apex of a nation’s ‘democratic’ process. The ‘No’ campaigners and those criticising the reform seem to comfortably ignore – for obvious reasons – the fact that the proposal for the new constitution makes the president accountable to the legislative body – the parliament – and the judiciary. [8] [9] 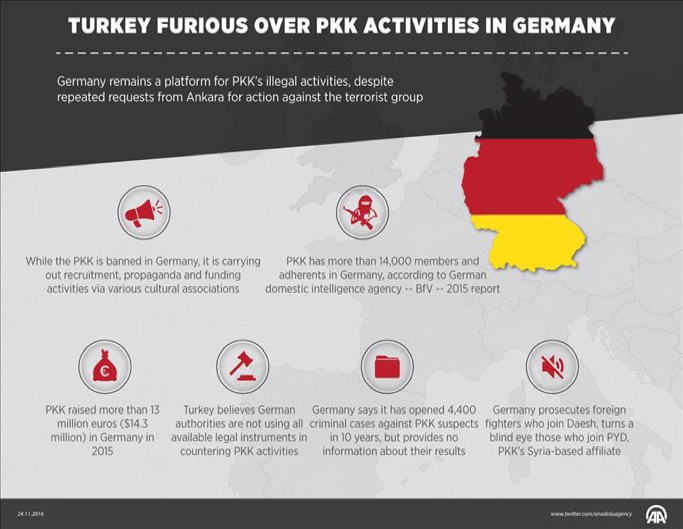 Some European countries have put up a rather undiplomatic stance towards the ‘Yes’ campaign, making it near impossible for the Government of Turkey to reach out to their citizens living in parts of Europe or even, ludicrously, for diplomats to reach their own embassies! And although a possible violation of the 1961 Vienna Convention on Diplomatic Relations, notably article 22 and 26, [10] Turkey-bashing by European Governments pandering to the right-wing voter has become quite an infectious disease. 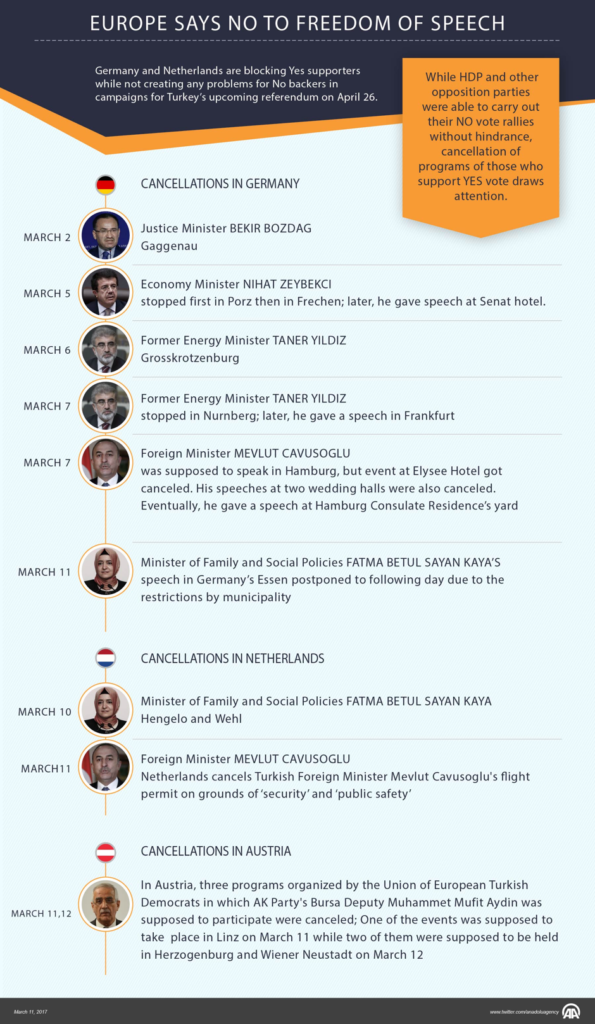 Ludicrously, the opposition campaigners against the constitutional change (‘No’ vote) were allowed to campaign without hindrances or cancellations, whilst elected and incumbent government officials including senior Ministers did the impossible to get their voices heard by those who elected them in the first place. Even the option to make an informed choice was barred from the Turks living abroad. This manifested itself in some eight campaign rally cancellations in Germany, two in the Netherlands and three in Austria. [11]

“They do not let our friends speak in Germany. Let them do it. Do you think that barring a Turkish minister from pronouncing a speech [in Germany] will make the votes ‘No‘ instead of ‘Yes‘?” said Erdogan whilst likening Germany’s actions to the Nazis.[12] Merkel for her part criticised those comments as being “totally unacceptable”. [13]

Erdogan also said that these negative escalations in parts of Europe show that “The West has thrown off its mask in the past days” and that it is showing some “signs of increasing fascism, racism, and Islamophobia”, [14] a phenomenon not exactly invisible.

An earlier incident between the Turkish President and the German Chancellor Angela Merkel saw President Erdogan criticising the latter for referring to certain acts of terrorism as ‘Islamist Terrorism’, rebuking the term by expressing the views of the Muslims and giving her a brief lesson on the word Islam. [15] Does Erdogan’s ability to better represent European Muslim minorities than their own governments play a role in forging this diplomatic enmity towards him? Or is it Muslims’ feeling of empowerment and dignity that sour relationships with those now neighbours of a thriving majority-Muslim state?

Regarding the actions of the Dutch, barring the Turkish Foreign Minister from landing, Ayman Nour, leader of Egypt’s Ghad al-Thawra Party said that they “reveal the intellectual and political extremism that is currently sweeping the West and a hatred of Muslims and Arabs”. The International Union of Muslim Scholars also condemned the “unacceptable” treatment of Turkish government ministers, calling on the entire Muslim world to show solidarity with the Turkish government. And many more messages of support poured in from Sudan, Palestine, Lebanon, Iraq, Morocco, among others nations and groups. [16]

So why is a constitutional change that would match Turkey, if passed, to other presidential systems in the world such as the USA causing so much restlessness in the secular world? Jaber al-Harami, Editor-in-Chief of Qatar’s al-Sharq newspaper, for his part, asked, clearly rhetorically: “Why is Europe afraid of change in Turkey?” [17] Maybe the simplest way to put this saga would be in the words of Ahmed bin Rashid bin Saeed, a professor of political media at Riyadh’s King Saud University, who said that:

“The constitutional amendments on which the Turkish people will vote next month will make Turkey stronger and more stable. This is what frightens Europe.” [16]

To perceive this in another way: whilst Europe is busy fighting over Brexit, Dexit, Auxit, Frexit, Nexit [18] and God knows what other countries in the Union are suffering from similar Euro-marital upheavals, it will be a hard pill to swallow watching one of the historically worst economies in the world perished by military coups, become the sixth-largest in Europe and projected to become the fifth, [19] at the hands of a commoner who used to sell buns to earn some extra cash in his youth. [20] Not least the industrial, political, military and diplomatic improvements in Turkey and most notable, the “Islamisation” of Turkey under the leadership of a man trained to be an Imām or Khatīb in a Masjid.

Sometimes, in times like these, ahead of a ‘Yes’ or ‘No’ vote in one of the most crucial referendums in the modern day, you need a few Turko-phobes to push you in the right direction.

And in Allah we put our trust.

Co-written by Haneef b. Ahmad and Ahmed Hammuda