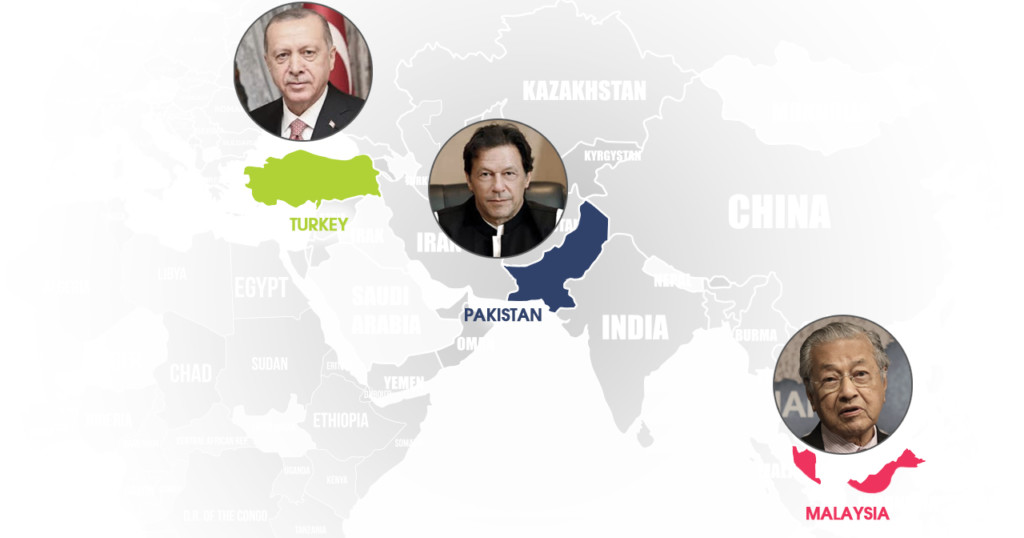 Khan’s speech resonated with Muslims around the world, as he touched upon a pivotal area of utmost concern to the global Muslims: islamophobia. He addressed the well-orchestrated, vicious campaign to demonise and alienate Muslims, “there is a misunderstanding in the West regarding Islam, which is causing Islamophobia in the world…there are 1.3 billion Muslims in this world. Millions of Muslims are living in the US and European countries as minorities. Islamophobia, since 9/11, has grown at an alarming pace. Human communities are supposed to live together with understanding among each other, but Islamophobia is creating a division…”

Khan’s aggressive speech also criticised the media’s attempts to equate Islam with terrorism. He particularly pointed out the prevalent double standards in the Western world, where freedom of speech is being abused to hurt the religious susceptibilities of the Muslims. The oft-cited example is the insulting of the Beloved Prophet (OWBP), while the Holocaust is treated with sensitivity. He also stressed that Western leaders were not solely to blame for contributing to Islamophobia, as Muslim leaders had failed to explain that “no religion preaches radicalism”.

Khan’s tough talk on Islamophobia gained added traction and is trending in the backdrop of the roundtable discussion on “countering hate speech”, held on the side-lines with the involvement of PM Khan, Turkish President Erdogan, and Malaysian PM Mahatir. This historic tri-lateral meeting resulted in a decision to jointly launch an English language channel dedicated to confronting the challenges posed by Islamophobia, to correct the misconceptions which bring people together against Muslims, and to properly contextualise the issue of blasphemy. President Erdogan stated that hate speech is among the worst crimes against humanity.

The springs of Islamophobia have been flowing for some time. Although racism towards Muslims pre-dates 9/11, Islamophobia has continued to grow, reaching an intractable point in recent years. The current primary hotspots of Islamophobia remain the U.S. and Europe. As extreme right-wing populist views started to gather public support in post-9/11 America and Europe, particularly after Trump’s victory, even the mainstream Media and political parties have began to either embrace Islamophobia’s extreme right rhetoric or adopt an apathetic attitude for reasons of political expediency. As a result, as the author and commentator Reza Aslan pointed out regarding the US, “Islamophobia has become so mainstream in this country that Americans have been trained to expect violence against Muslims—not excuse it, but expect it. And that’s happened because you have an Islamophobia industry in this country devoted to making Americans think there’s an enemy within.” [1] Islamophobia has also become the predominant form of racism in both in the U.S. and Europe today. Muslims have thus been caught in an unbridled vitriolic firestorm in which their religion, ethnic backgrounds, and cultures have become merged into a series of negative stereotypes.

In the UK context, Lady Warsi quipped that Islamophobia has passed “the dinner table test, that the expression of anti-Muslim and anti-Islamic sentiment has become socially acceptable through conversational civility.” [2] The UK entered “unchartered territory” after the Brexit vote, with British Muslims suffering an “explosion” in faith-based hatred. However, just when an imperative need arose for the government, political parties, and of course the media to act with the utmost responsibility and help tackle the evils of xenophobia and hatred, they miserably failed to demonstrate the necessary maturity in leadership in that delicate moment in our history. Sadly, this dire situation is now being further exacerbated by the manifestation of institutional Islamophobia within the ruling Conservative Party. Present ‘Islamophobe’ Prime Minister Boris Johnson’s vitriolic rhetoric and dog-whistle politics once likened women wearing the burqa to “letter boxes” and “bank robbers”. In fact, he also wrote in 2006 that Islam has caused the Muslim world to be “literally centuries behind” and there was something about Islam that hindered development in parts of the globe and, as a result, “Muslim grievance” was a factor in virtually every conflict – a historically warped analysis which risked “actively promoting hatred of Muslims”.

Pervasive Islamophobia is a global phenomenon and crisis and therefore calls for a global response. In countries around the world, elected leaders and mainstream elites have fuelled anti-Muslim sentiment, benefiting from the rise of white nationalism and supporting policies that directly target Muslims. The world’s Islamophobia problem has already become a powerful industry working through a world of conservative bloggers, right-wing talk show hosts, evangelical religious leaders, right wing media, and politicians. They are all united in their quest to exhume the ghosts of 9/11 and convince their compatriots that Islam is the enemy. Anti-Muslim rhetoric and policies have become dangerously normalised in institutions, politics, media, and everyday life. From heads of state to powerful media figures and celebrated intellectuals, anti-Muslim views flourish in plain sight, often unchecked and unpunished. The sad plight of the Chinese Uighurs Muslims, Myanmar Rohingyan Muslims, and Indian Kashmiri Muslims as a result of well-orchestrated state oppression brings to light the global nature of the alarming rise in Islamophobia.

Muslims of this age have thus become the new Humpty Dumpty crestfallen; all over the globe they are in the limelight, open and exposed. Never in their known history have the Muslims faced such tremendous odds arrayed against them, utterly unprepared and their religion hijacked. Stones are being cast at them from within and more than ever before. They are facing perhaps the greatest crisis in Islamic history; a crisis never faced by their predecessors of any generation. The closest examples may be the Mongol invasion of Baghdad and the more recent fall of the Ottoman Empire. The enemies preying upon the Muslims have done their homework in minute detail and have already worked out their strategy based on the weaknesses of the Muslim psyche and body politic.

Contributing to this downfall is the defeatist and apologetic mentality of leaders and decision-makers. For example, the Trump administration has done more to stand up for the millions of Uighurs in concentration camps than any Islamic leader, [3] speaking volumes about the efficacy of Muslim leadership. In the context of annexation of East Jerusalem by the Zionist Israeli regime, Robert Fisk said, “The Organisation of Islamic Cooperation is no longer a force on the world stage. These Muslim leaders (‘all the tired old men to whom we have listened for so many years’), are no longer valid. They represent failed states with neither morality nor courage to show.” [4]

During a discussion before a UN resolution co-sponsored by Pakistan early this year, it was echoed that “The growing prejudice against Islam was evident in policies aimed at creating walls and barriers against displaced populations as much as in attempts to denigrate Islamic beliefs and our sacred personalities under the pretext of freedom of expression. The political falsehood of equating people of different religions with violent extremism in order to garner political support for the forces of hate lies at the heart of this phenomenon. It was time to strengthen efforts to foster a global dialogue on the promotion of a culture of tolerance, dialogue, and peace at all levels. It is time to emphasise respect for human rights and diversity as well as space for diverse voices, religions, worldviews, and faith traditions.” [5] However laudable these resolutions are, they will only be actioned if the political will of the international community facilitated it. The clout of the Muslim leadership is necessary to help develop a consensus to combat the forces of islamophobia, xenophobia, and racism. It is in this context that much hype and hope is building up within the Muslim world, particularly surrounding the inspiring speech by PM Khan and the evolving leadership trio (Khan, Erdogan, and Mahathir). They promise to act as a bulwark against global Islamophobia while the Arab Muslim leadership has decisively failed them. Will this be a reality in the foreseeable future? One possible test may be whether they will have gathered the courage to expose the Chinese atrocities in Xinjiang or condemn Saudi atrocities in Yemen.