The Defining Battle of Aleppo 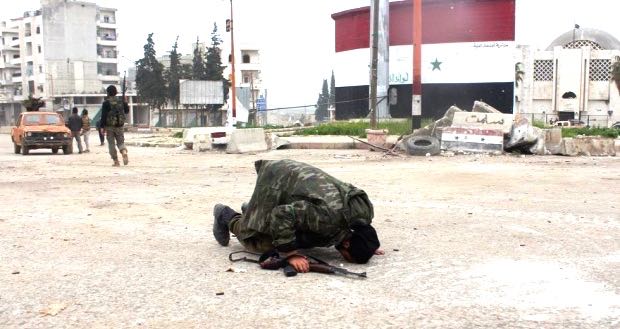 The Turning Point of the Great Battle of Aleppo

To Allāh belongs all praise. Though the size of Syria’s trauma leaves little for one to celebrate, Allāh imparts moments of victory, moments of joy, moments of relief to strengthen our resolve and to remind us that He is with us, and His promise after His trial will surely come to pass,

“Or did you suppose that you would enter the Garden (Jannah) without facing the same as those who came before you? Poverty and illness afflicted them and they were shaken to the point that the Messenger and those who had Iman with him said, ‘When is Allāh’s help coming?’ Be assured that Allāh’s help is very near.“[1]

Of the greatest and most heart-warming images that emerged from the City of Aleppo, following its liberation from besiegement at the hands of the resilient Islamic Rebel Forces, was of a group of its civilians falling prostrate in thanks to Allāh, the All-Mighty, the Victor, the Helper. He is the One who rid them from the three-way spiteful coalition comprising of the Russian Military, Iranian Revolutionary Guards and the Nusayris Syrian Regime Forces only 25 days after it was entirely surrounded. 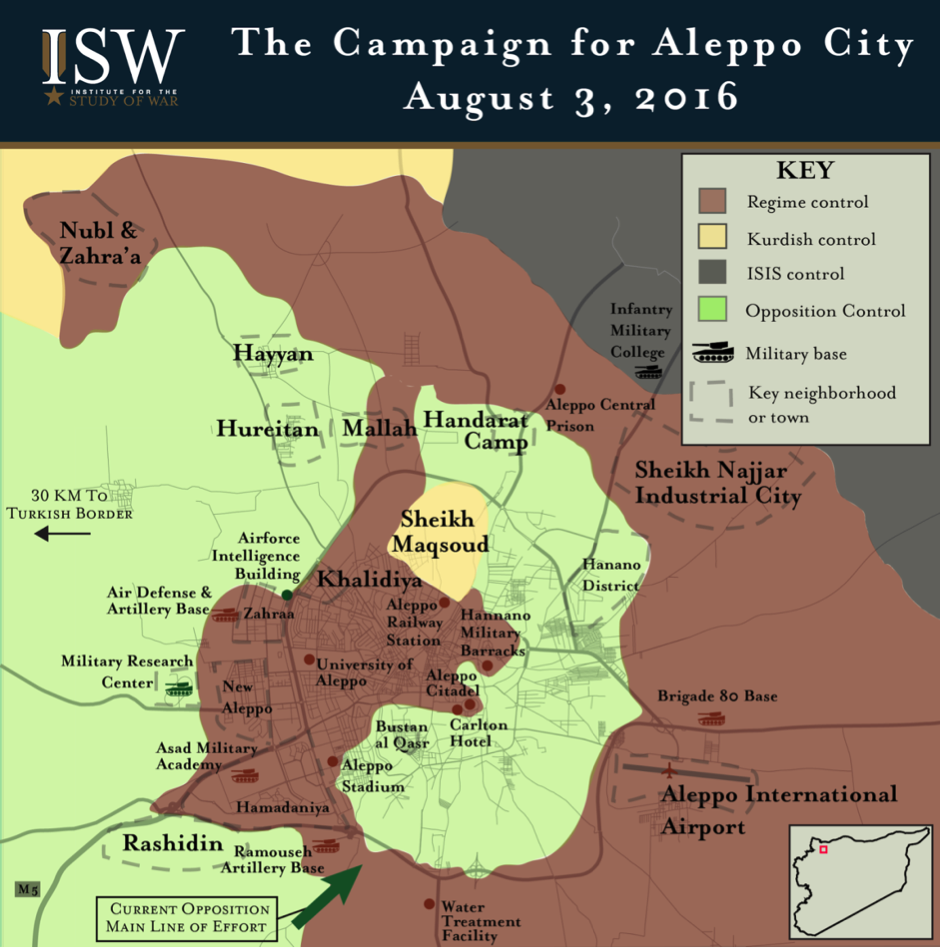 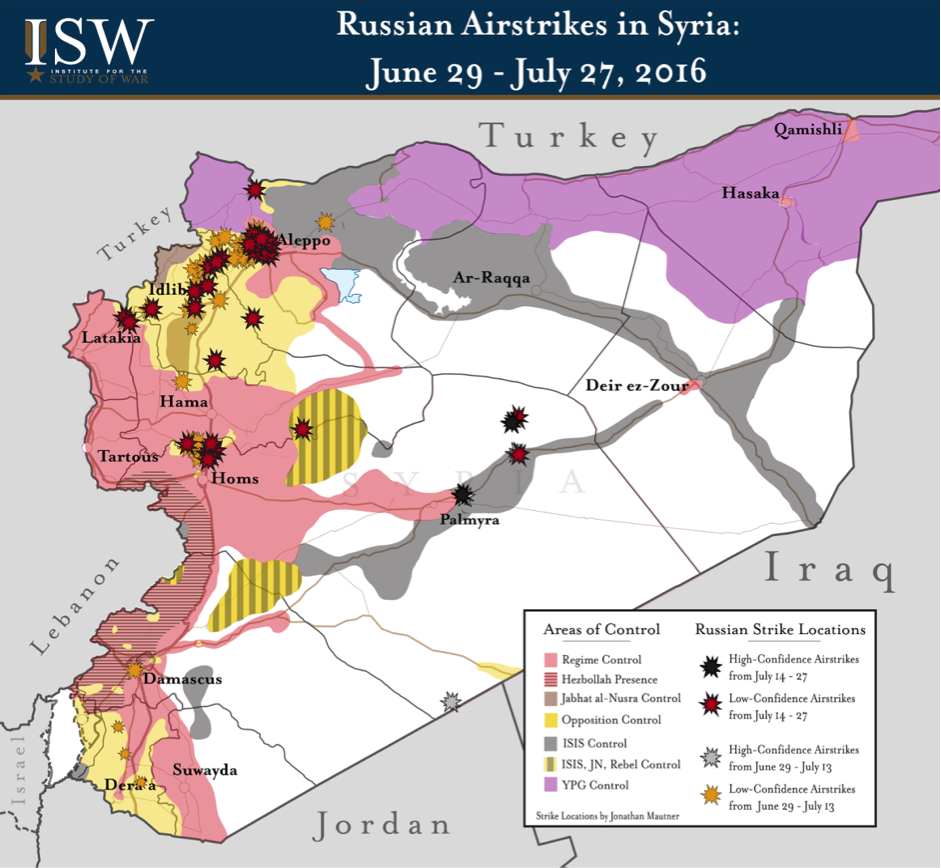 The City of Aleppo, which had all but lost its lifeline from rebel-controlled territories, was previously connected to its East; however, the only remaining highway supplying the beset city was severed, leaving some 400,000 Syrians trapped, surrounded and besieged by the Iranian and Syrian militias, supported by continuous and unrelenting aerial Russian bombardment. Figureheads in the Islamic resistance movements planned a one-month counter-offensive, only to be blessed with a divine victory on Saturday, 6th of August after only six days of intense, unified fighting.[2] All of Ahrar al-Sham, Jaish al-Islam, the Free Syrian Army and numerous other factions heroically supported one another, and Allāh’s victory followed suit:

“You who have Īmān! When you meet a troop, stand firm and remember Allāh repeatedly so that hopefully you will be successful. And obey Allāh and His Messenger and do not quarrel among yourselves lest you lose heart and your momentum disappear. And be steadfast. Allāh is with the steadfast.“[3]

The northern supply route known as Castello Road served for months as the only channel drip-feeding desperately needed supplies to residents of the city. The scarce provisions which made it into the city did little to counter the daily bombs dropped by Russian and Assad regime aircrafts on homes and hospitals alike.[4] Finally, towards the end of July 2016, Assad’s militias, which were eagerly assisted by the Lebanese Hezbollah,[5] took the highway; extinguishing the last source of life and hammering the final nail into the proverbial coffin. According to the United Nations aid organisation (OCHA), the East of Aleppo had not received humanitarian supplies since the seventh of July and had been subject to aerial bombardment on a near daily basis.[6] Later to rise against the despotic regime, Aleppo has since been the revolution’s stronghold. The International Coalition made concerted efforts to uproot it in the hopes of deflating the Islamic Revolution. The Russian war machine, which is swindling a narrative of ‘fighting ISIS’, admitted to at least 80% of their airstrikes landing in areas miles away from ISIS territory.[7]

For some the term ‘siege’ may conjure images of a walled citadel holding enemies at bay as each party waits for the other to yield or starve. However, in modern warfare, and particularly in the case of Aleppo, a siege describes something far more grim. Eastern Aleppo has been designated as a ‘kill box’ making it the target of the combined fire of Assad troops, Hezbollah invaders and Russian jets. The Assad supporters had no intention of letting anyone out alive, and civilians trying to flee the siege in buses and cars found themselves under intense fire.[8]

The Unity of the Islamic Factions and the Victory

The Islamic Factions, after having declared the merger of more factions under a single representative and command base, conquered the world’s doubts as to their ability to escape annihilation this time. The ‘Mufti’ of Assad sensed defeat. Exacerbated by their unity and resolve, the fraudster Ahmad Badreddin Hassoun came out two-days before his master’s mortifying defeat, frantically imploring Russia and Hezbollah for more assistance, who are, according to this opportunist, “defenders of their religion”.[9]

Allāh’s victory came irrespective of materially unbalanced odds and, along with Assad’s mindless drones who turned on their heels, an incalculably severe blow was dealt against its most senior military command. Syria was cleansed of Hassan Mahmoud Issa,[10] the celebrated Hezbollah figurehead, Major General Mahmoud Aziz Hassan the Regime’s ‘Special Forces Commander’, and Lieutenant Asim Kamal Ramadan among others.[11] Walḥamdullilāh.

Military analysts have failed to formulate a plausible explanation as to how the fighters in the besieged City of Aleppo managed to dramatically infiltrate what seemed to be an impenetrable military barricade. Overtaking a huge government military complex in the Ramouseh district, they eventually met their brothers on the other side. This is because defending forces have an advantage over attacking forces, and military strategists hold that a 3:1 ratio in favour of the attacking force is required for a successful attack,[12] only offset by aerial support. Observers believe the Islamic rebel groups numbered less than a third of the pro-regime militias, without any aerial support or effective anti-aircraft weaponry. Pro-regime forces, however, enjoyed the support of intense Russian bombardment that has been focused since July on uprooting Aleppo City’s most critical infrastructure to purge all of its civilian inhabitants, and thus complete its heinous genocide against whoever remains.[13]

Fighters report that their successful overrunning of Ramouseh’s Artillery Base has allowed them to amass enough spoils for a potential four years of continued struggle against the regime.[14] The actual fight, reportedly persisted for less than half an hour,[15] despite Assad’s militias having etched on one of its walls the profane statement “Artillery is the Lord of Warfare.”[16] The newly formed ‘Jabhat Fateh al-Sham‘ announced that Iran’s and Hezbollah’s losses during the Battle of Aleppo exceeded all other occasions since the start of Syria’s revolution. Pro-regime militias were witnessed fleeing en-mass, according to the spokesperson for Ahrar al-Sham, Abu Yusuf Muhajir, due to their completely obliterated moral state. Following this historic victory, two of Syria’s largest Islamic factions operating in the North of Aleppo, Thuwar al-Sham and Jaysh al-Mujahideen, declared a ‘complete merger’ with the aim of overthrowing the Assad Regime.

Brigadier General Mustafa Sheikh, in an attempt to explain this extraordinary development and achievement, centred his analysis on the recent victory in Turkey against the coup attempt, describing it as the “turning point not just in the region, but in the entire world” and, after the help of Allāh, the central reason to the reformation of the military landscape in Syria. He goes on to say:

“Part of the build up to the Battle of Aleppo was the US administration entering its feeblest era, after becoming an open accomplice with Iran… alongside the failed coup in Turkey that has bolstered Erdogan’s ability to restore order, and, alongside Saudi Arabia and Qatar use this once dead avenue (the Turkish Army) to provide exclusive support, for the first time in the history of the Syrian Revolution. This coincided with the declared unity between the rebel factions and the disintegration of the Nusra Front from al-Qaeda, to the extent that (despite this new composition taking charge of the battle), not a single one of their black flags can be seen in all of Aleppo’s contemporary battles.“[17]

“…the most important achievement for the rebels has culminated in replenishing the support of civilian masses, having fulfilled the latter’s demands of uniting their factions. The Battle for Aleppo has become a (united) national effort, and this is the (manifestation) of that reality. This comes alongside the recent downing of a Russian Military Helicopter,[18] and its pilots being dragged out in front of the entire world; a humiliating spectacle and one that has imbalanced the image of (Russia’s) military grandeur internally and externally…“[19]

And though we opine, analyse and look for ‘reasons’, the Victor is none but Allāh, and the ultimate basis for the victory of our brothers and sisters in Syria is their patience and utter dependence on Allāh, having been forsaken by both East and West. Allāh says, relating the story of Dāwūd (ʿalayhi al-Salām) and Jalut when some had all but lost hope in their encounter;

“…But those who were sure that they were going to meet Allāh said, ‘How many a small force has triumphed over a much greater one by Allāh’s permission! Allāh is with the steadfast.”[20]

Though it has been prolonged, these scenes of victory should reinforce in our hearts the certainty that Allāh has taken care of Syria and its people. Whether loved by those like them or loathed by their enemies and the Munāfiqūn, the end result will be for its steadfast believers.

Image from Institute for the Study of War for Aleppo on August 3rd, 2016

Image from Institute for the Study of War for Aleppo on August 3rd, 2016