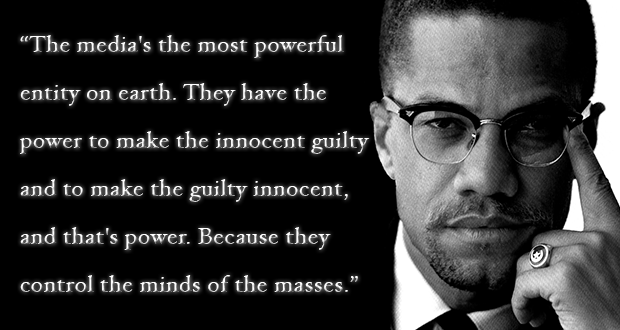 What is the common perception of the media and what is its main goal? Every media outlet, whether the newspapers, news channels, entertainment such as TV series, movies or radio has the same goal. It is the same goal that every business pursues, the bottom line, the controller: the Profit.

Typically, the easiest route to a profit for the media is to provide content that its target audience can relate to. In a very crude example, the Sun newspaper in the UK will, on a daily basis, print a picture of a topless woman. It knows very well that its main target audience—the working class and manual labourers on the lowest incomes[1]—want to see this content and thus serves it up in the interest of profit. Morality, for a secular society such as the United Kingdom, does not usually feature as high up as profit in the thought process.

So is the media a passive animal that changes its topics and discussions to suit the mood of the general public or does the media influence the general public’s views? A Gallup study in America highlighted the general public’s attitude towards Islām[2]. The study found that there is a large amount of ignorance in America towards the religion. Many people cited that they did not know much about Islām, yet of all the major religions within America, Islām had the highest disapproval rate. The study reasoned that this is because Islām appears most frequently in the media with a negative connotation.  The follow on questions are then: do media institutes follow a certain agenda? Do they have political motivations? Are they in fact controlling the society they exist within? A Guardian article in 2010 in the run up to the 2010 UK elections highlighted the historical significance that newspapers have had in the past and present in influencing the general public’s opinion[3]. The influence of the newspaper itself may possibly have diminished slightly with the advent of newer technology, but nevertheless the overall influence of the media is unquestionable. Every newspaper follows its own political agenda and it can also be assumed that every media outlet behaves similarly.

There is no doubt that media institutions in Egypt will be equally vying to make a profit. However, in the case of Egypt there appears to be no divide as to the opinion assumed by news channels and newspapers. In the UK for example, some newspapers will be avid supporters of one political party, whilst others will support a different party. In Egypt, every media or news institute is united in its condemnation of the Muslim Brotherhood and Islām. The media opinion is so one-sided it is almost laughable. After the military coup, General Abdul-Fattah Al-Sisi made a special point by closing all pro-Islām TV channels regardless of their political agendas or leanings if any. Al-Nas and Al-Hafiz were both shut down, as well as a Muslim Brotherhood controlled channel, Egypt25. Even Al Jazeera Egypt was shut down and its operators detained in an attempt to stop it broadcasting from an anti coup rally[4].

The obvious result was that the remaining news channels or state controlled media only broadcast what the military wanted the public to see. But is it really as simple as that? The media in any country is sometimes more powerful than the state. The reality of the matter is that media in Egypt engineered the downfall of the Muslim Brotherhood by going on an unremitting, demonising, propaganda campaign against the elected President, Mohammed Morsi[5]. As we know, this eventually led to the military riding in on a fake cavalry charge wearing the Shaytān’s deceitful and bloody armour to overthrow the people’s leader. So why then, does an institute so powerful, bow before a military which is not apparently interested in monetary profit?

The answer lies in shared interest. The Egyptian media, although it contains elements of news, is largely an entertainment enterprise. Will the entertainment industry flourish under an Islamic government? Modern day entertainment relies on the use of glamourised, objectified women in music and film, themes of gambling, drugs and alcohol and carefree spendthrift lifestyles generally devoid of Islamic morality. Egyptian entertainment, although not at the same level of western entertainment, is nonetheless in the same business, appealing to the highly sexualised youth and creating idol worship over celebrities for the mass population. An Islamic government and an entertainment industry such as this cannot co-exist. Thus a dirty alliance has been formed between the media and the military signed in the blood of those who died at Rabī’a and other instances[6].

To counteract the influence of the Egyptian media, let us expose two of the most obvious tactics they are using. The Egyptian media has neither the originality nor intelligence to be innovative. The first tactic that has been used, which has been used all across the world throughout history, is lying. The easiest statement that can be exposed as a lie is the amount of people present at Tahrīr Square that protested against the elected Egyptian President Mohammed Morsi on the 30th of June 2013. Astronomical figures in the millions have been quoted. Simple calculations of space prove that the amounts being quoted are gross exaggerations[7].

The second dirty tactic is the one employed by the West in its attempts to shift public opinion to be in favour of its own agenda in its “War on Terror”. The Egyptian media outlets have adopted the exact same approach. “Egypt Fights Terror” is the tag line now, appearing at every relevant news report. This may explain the declaration made by the post coup deputy Prime Minister, Hossam Eisa, that the Egyptian Brotherhood was a terrorist organisation[8]. Spectators of Egyptian entertainment can tell you that in fact the tagline existed a long time before this declaration!

It is clear from this brief discussion that the Egyptian media is looking after its own existence and is willing to suffer the Egyptian Military in order to promote itself. The next phase of this media indoctrination has recently started in the form of the upcoming elections. Amazingly, General al-Sisi is being urged to nominate himself for the presidency[9]. It seems inevitable now that al-Sisi will become the president of Egypt. Those deceiving themselves into thinking that an election will make the slightest difference need only look at the previously democratically-elected Dr Morsi as a painful reminder. If Egyptians or Muslims living in Egypt ever want a reality check as to the true nature of General Sisi, then they need only look at his promoters. Israel has supported this man since the coup[10] and recently Putin has also given him backing[11]. It is of no doubt that he finds the courage to persist in his corruption, but Allāh alone will disgrace his ambitions, even if after some time.

Allāh says in the Qur’ān (translation of the meaning):

“O you who believe! Take not as (your) Bitānah (advisors, consultants, protectors, helpers, friends) those outside your religion (pagans, Jews, Christians, and hypocrites) since they will not fail to do their best to corrupt you. They desire to harm you severely. Hatred has already appeared from their mouths, but what their breasts conceal is far worse. Indeed We have made plain to you the Āyāt (proofs, evidences, verses) if you understand”[12]

And the Prophet (peace and blessings of Allāh be upon him) said: “A man will follow the religion of his close friend, so let each of you look to who he takes as a close friend.”[13]