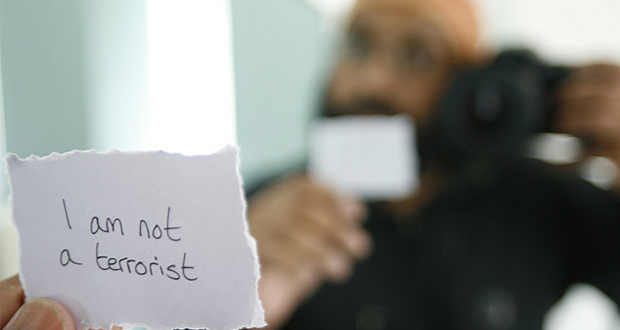 Award winning South African journalist Karen Jayes speaks to CAGE’s Research Director Asim Qureshi regarding the discriminatory impact the UK government’s PREVENT policy has had on British Muslims; drawing parallels between PREVENT and the criminalisation of thought in apartheid South Africa. The report referred to in this piece can be viewed here.

The UK government’s “anti-terrorism” strategy, known as PREVENT, is cutting into every sector of Muslim life in Britain, resulting in divisions and fear – as well as the arrest of over 700 young Muslims between the ages of 15 and 24 in the past year alone. Independent advocacy organisation CAGE warns that the policy’s wide scope makes legitimate Muslim behaviour and activities unlawful, and bodes a threat not only to Muslims, but to all those concerned with social justice.

Not only that, but through its broad, politically driven and unchallenged definition of “extremism”, PREVENT appears to be an attempt by the UK government to covertly define what constitutes legitimate Islam and what doesn’t.

“This is what PREVENT has always been all about,” says Asim Qureshi, Research Director at CAGE. “It’s always been a social engineering programme to legitimise the government sponsored version of Islam only.”

An Islamic outlook that is concerned with the world and which questions the effectiveness of neo-liberal democracy to deal with our global challenges, is the target.

PREVENT has covertly shut down events organised by mainstream Muslim organisations, where issues like Palestine and Guantanamo Bay have been under discussion.

“Large portions of people in the UK have no idea that PREVENT even exists,” said Qureshi. “Most of these organisations do not want to come out and say that PREVENT officers have stopped us from holding an event, for example. They don’t want the community to feel that there is a policing issue around their organisation.” This makes the policy very difficult to challenge or obstruct.

PREVENT’s broad definition of “extremism” includes indicators including certain expressed opinions, increased religiosity in dress, and support of certain causes. The strategy makes much of the “early detection” of “extremism”, meaning that misconceptions or rejection of UK foreign policy, distrust of Western media, and perceptions that government policy is discriminatory, are all stated indicators in the PREVENT policy that can lead to a Muslim being reported and even arrested for “extremism”.

“The apartheid regime had many similar mechanisms to criminalise thought,” he said. “If you look at the life of someone like Steve Biko, it’s quite obvious that they were using very similar tactics and techniques in order to criminalise descent.”

Qureshi said there was not enough debate on the definition of “extremism” prior to the policy being ratified and implemented. The policy was quickly adopted at a traumatic time for Britons, post 7/7, where a certain accepted narrative around current events was easily posited and accepted.

PREVENT was reinvigorated in 2013, and largely sold to the public by politicians who claimed that Britons going to fight against the regime of Bashar al-Assad in Syria, would be more likely to commit “terrorist attacks” when they returned home – a claim that CAGE has consistently stated to be false based on proof that Britons who fight in Syria do so out of a concern for human rights and social justice, both core elements of their “Britishness”.

This approach to Muslims by the UK is unprecedented. “During the conflict with Libya, we didn’t see this same type of rhetoric taking place in terms of a blowback against the UK,” said Qureshi. “In the same way, if we think of British soldiers who are fighting with the IDF in the occupied territories – Jewish British citizens – there’s no debate or discussion about them being involved in war crimes.”

CAGE describes PREVENT as a politically motivated programme and not a counter-terrorism strategy. One of the reasons why it’s succeeded in being implemented is that Muslims themselves have too easily bought into the accepted Western driven narratives that prevail in the “war on terror”.

“We’ve been a bit politically naive,” he said. “We haven’t questioned some of the underlying assumptions about who Muslims are and what they believe in.”

The result, according to the CAGE report entitled The PREVENT Strategy: A Cradle to Grave Police State, is a policy which is no longer about stopping politically motivated violence – which is driven by frustration and anger at Western support of corrupt governments and not ideology – but rather on defeating Islamic ideology itself, by instating an Islam that is neo-liberal friendly, and fragmented.

“They want us to just sit and do thikr in our homes,” he said.

According to the CAGE report, teachers, doctors, police officers, civil servants including firefighters and local government officials are being trained and indoctrinated with a neo-conservative understanding of Islam and Muslim political struggles. This training is ostensibly presented by “experts”.

“It’s almost like we are becoming government informants,” one nurse told Al-Jazeera.

Suspicion has even infected the Muslim community, said Qureshi. “They are putting this fear into the community that if they associate with one another, then somehow that could be a problem, because [there’s an implied message] that you don’t know who another Muslim is really, and so everyone is always potentially a suspect.”

One of the most disturbing aspects of PREVENT is its ability to infiltrate schools and affect the lives of young Muslims. Through its report, CAGE shows how almost 700 young people between the ages of 15 and 24 have been apprehended through PREVENT’s Channel programme, which is the “action” arm of PREVENT. Mothers have been encouraged to report “terrorist” tendencies in their children. A voluntary code of conduct will also be released for madrassas in the UK –which “will be supportive of the government’s preventing-extremism strategy”.

Since the advent of PREVENT, CAGE has heard numerous reports from Muslims that projects, ostensibly commissioned in the interests of the community, but funded by PREVENT, were in fact intelligence gathering exercises for the police.

More haunting have been mapping exercises of Muslim organisations, under the guise of “Muslim needs research”, that were in fact used to profile these groups to fit into notions of Islam put forward by PREVENT.

In one London borough, CAGE reported that citizens working with youth were told to add information to databases and highlight which youths were Muslim – and they were even asked to provide information to police about which streets Muslim youths could be found on. “One youth leader alleges his refusal to provide intelligence led to the police spreading false rumours and trying to smear him and his organisation,” reads the CAGE report.

The mechanics of thinking behind the PREVENT policy itself is shrouded in secrecy with little or no response to emails or questions, said Qureshi. There are no mechanisms to challenge decisions, nor is there a review policy to scrutinise how it is applied.

“Whilst the PREVENT strategy nowhere recognises foreign policy and Western interventions as a motivator or cause of violence, it uses grievance and comments made about injustice, oppression and foreign policy as evidence of a propensity to future violence,” reads the CAGE report. This sets a dangerous and unchallenged precedent for social justice organisations and human rights activists – and threatens one of the core values of Islam, which is social justice. Most importantly, constant harassment of youth and families is divisive and, in some cases, might in fact increase propensity to violence.

“They don’t want Muslims to have that concern and affection for other Muslims who are suffering around the world,” said Qureshi.

PREVENT strikes at the heart of the transnational identity that Muslims have, and confuses or shrouds the core principles of Islam which offer genuine alternatives to an aggressive global neo-liberal system. CAGE has identified PREVENT as the leading blueprint for “counter-terrorism policy” across the world, and it has already been adopted in the United States.

Birmingham resident Mahmood told CAGE: “We’ve seen draconian legislation introduced – and that means we are surrendering our civil liberties. Where will this end? … We are sleep-walking ourselves into very serious times.”

CAGE is building awareness and constantly highlights and challenges PREVENT. Find out more about the PREVENT programme on www.cageuk.org or read the full report here.

This article was first published on 29 July 2014 in the Muslim Views newspaper which is distributed in South Africa.

Karen Jayes is a an author and journalist in Cape Town, South Africa. She is the recipient of the 2013 Sunday Times Literary Award for Fiction and the 2013 K Sello Duiker Award for her novel, For the Mercy of Water.

2014-08-10
Cage UK
Previous: Al-Intikās – Relapsing in Faith.
Next: Why am I delighted upon Erdogan’s victory?