Silencing of Whistleblowers – Welcome to the Orwellian State 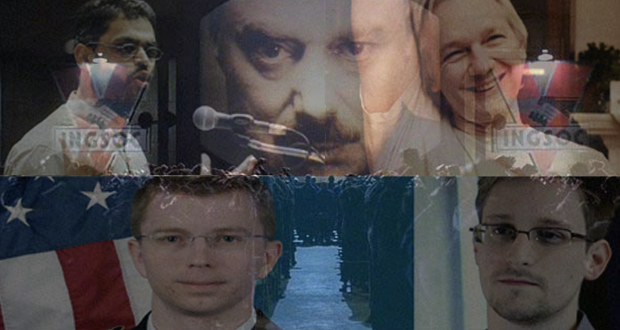 Moazzam Begg is a well known author and human rights activist, famous for experiencing horrific torture at the hands of western agents whilst incorrectly held in the infamous Bagram and Guantanamo Bay prisons without any due process or charges. He regularly speaks on mainstream news programmes and documentaries, bringing to attention the cases of those who are imprisoned around the world without any charge or due process, often subjected to severe cases of torture with governmental complicity.

Moazzam Begg has deliberately and incorrectly been charged under sections 6 and 17 of the terrorism act, accused of training and funding terrorism overseas in Syria. Conveniently, this act presumes guilt and makes it a condition upon the defendant to prove his or her innocence.

Moazzam Beg travelled to Syria with the full knowledge and permission of Mi5 over a year ago in order for him to complete his findings into the direct complicity of the British government in extraordinary rendition (outsourced torture) of prisoners in Syria. Upon his return via South Africa, his passport was confiscated by the authorities at Heathrow airport, citing that it wasn’t in the ‘public interest’ for it to remain with him[1].

Moazzam’s home was raided in the middle of the night on Tuesday 25th February and he was subsequently taken in by the authorities on the suspicion of aiding terrorism abroad, a day before he was due to make public the reports of his findings into British governmental complicity in aiding and facilitating extraordinary rendition in Syria. His last Facebook status before the raid and subsequent detention was “Sometimes knowing too much can be a curse.”

It seems that it really doesn’t matter who you are; if you investigate the state and are able to gather some incriminating evidence, whistleblow on the illegal activity of official government agencies, it will lead to harassment or discrediting in the form character assassination or imprisonment. It just so happens that whilst travelling to Syria to gain hard evidence of British complicity in illegal rendition, Moazzam Begg possibly interacted with some Syrian opposition and the authorities are now using this as the opportunity to discredit him. It’s easy to charge someone under the terrorism act since the burden is on you to prove your innocence, not the other way around. A cursory look at the cases of WikiLeaks founder Julian Assange, the former NSA computer analyst Edward Snowdon and US soldier Bradley Manning demonstrate the treatment of whistleblowers. Each of these individuals have exposed the criminal activity of western governments and are currently paying the price for this. The authorities will come after you one way or another.

Assange is the computer programmer that founded WikiLeaks in 2006. WikiLeaks became internationally well known in 2010 when it began to publish U.S. military and diplomatic documents with assistance from its partners in the news media. On 28 November 2010, WikiLeaks began releasing some of the 251,000 American diplomatic cables in their possession, of which over 53 per cent are listed as unclassified, 40 per cent are “Confidential” and just over six per cent are classified “Secret”. Since November 2010, Assange has been subject to a European Arrest Warrant in response to a Swedish police request for questioning in relation to a sexual assault investigation. In June 2012, following final dismissal by the Supreme Court of the United Kingdom of his appeal against enforcement of the European arrest warrant, Assange has failed to surrender to his bail, and has been treated by the UK authorities as having absconded. Since 19 June 2012, he has been inside the Ecuadorian embassy in London, where he has since been granted diplomatic asylum.

Snowden, a computer specialist and former employee of the Central Intelligence Agency (CIA) and National Security Agency (NSA) came to international attention when he disclosed a large number of classified documents to several media outlets. The leaked documents revealed operational details of a global surveillance apparatus run by the NSA and other members of the Five Eyes alliance, along with numerous commercial and international partners. Snowden is considered a fugitive by American authorities who in June 2013 charged him with espionage and theft of government property and are fighting for his extradition back to the US. In early 2014, numerous media outlets and politicians issued calls for leniency in the form of clemency, amnesty or pardon, while others called for him to be imprisoned or killed. He currently lives in an undisclosed location in Russia, serves as Rector of the University of Glasgow, and serves on the Freedom of the Press Foundation board of directors.

Bradley Manning was convicted in July 2013 of violations of the Espionage Act and other offenses, after releasing the largest set of classified documents ever leaked to the public. Assigned in 2009 to an Army unit in Iraq as an intelligence analyst, Manning had access to classified databases. In early 2010 he leaked classified information to WikiLeaks. The material included videos of war crimes, such as the July 12th 2007 Baghdad airstrike, and the 2009 Granai airstrike in Afghanistan; 250,000 U.S. diplomatic cables; and 500,000 Army reports that came to be known as the Iraq War logs and Afghan War logs. Much of the material was published by WikiLeaks. Manning was sentenced in August 2013 to 35 years’ confinement with the possibility of parole in eight years, and to be dishonourably discharged from the Army.

These incidences are further cases of what is increasingly becoming an Orwellian state, where the welfare of a free and open society is redundant. Imposed by draconian control by propaganda, surveillance, misinformation, denial of truth, and manipulation of the truth, these are worrying times for civil liberty that many mistakenly believe they still possess.