The truth about Sultan Aurangzeb 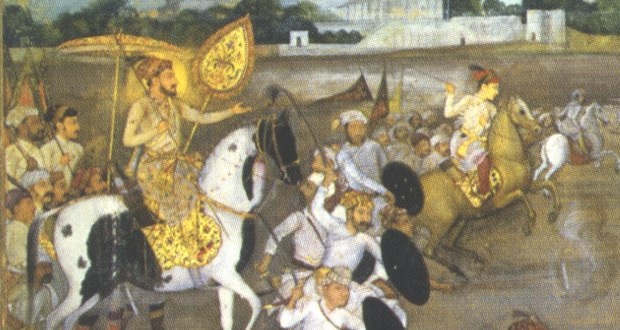 The Emperor Aurangzeb, who rose to the throne in the 17th Century as the sixth Mughal ruler over “India”, is often painted as a vicious, religiously intolerant, minority-suppressing fanatic, whose only job was to demolish temples in favour of mosques, antagonise his father and brothers, and single-handedly bring down the once magniﬁcent Mughal Empire. And yet, the reality of the situation is that this could not be further from the truth.  Aurangzeb would often say about himself, “This weak old man, this shrunken helpless creature, is afﬂicted with a hundred maladies besides anxiety, but he has made patience his habit”. Once, when one of Aurangzeb’s servants stumbled against him and knocked him down accidentally, the servant collapsed in fright for fear of retribution. The Mughal emperor spoke to him kindly, however, saying “Why do you fear a created being, one like myself? […] Rise and do not be afraid.”

Even the Italian historian Manucci who was present during Aurangzeb’s rule, despite loathing him and preferring his far less religious brother Dara Shikoh (many question whether he was a Muslim at all due to the fact that he tried to create a hybrid religion between Hinduism and Islam), said that Aurangzeb

“…assumes always great humility of attitude”. Even when one of his ofﬁcers disobeys him, he betrays no anger. All he says is, (and that in the softest voice) that he is only a miserable sinner, that there is no reason for astonishment if his orders are disregarded, since every day those of God Himself are neglected and repudiated. He does not forget, however, to repeat his orders and adopt every exact means of getting them executed.”

In one of his letters, Aurangzeb said,

We must put up with every class of people, what is to be done with them? They are also people

Writing to his father, Shah Jahan of the famous Taj Mahal (incidentally the name “Taj Mahal” is a corruption of the “Mumtaz Mahal” – the name of Shah Jahan’s beloved wife, and for whom the tomb was built for) Aurangzeb insightfully said,

I wish you to recollect that the greatest conquerors are not always the greatest Kings. The nations of the earth have often been subjugated by mere uncivilised barbarians, and the most extensive conquests have, in a few short years, crumbled to pieces. He is the truly great King who makes it the chief business of his life to govern his subjects with equity.

I have heard that in your heart Jagir districts oppression is practiced openly […] Fear the sighs of the oppressed.

Modern historians love to paint Aurangzeb as a villain. And yet, even they admit their double standards towards him. Abraham Early writes,

Later historians saw Aurangzeb in an altogether different light. As the passage of time faded the memory of his innumerable small acts of everyday kindness, but magniﬁed his few notable misdeeds, such as his religious intolerance, his ruthlessness as a conqueror, his use of tactics to get the better of others, and more than anything else, his harsh treatment of his father, brothers and sons. But his predecessors too were guilty of similar acts – Jahangir and Shah Jahan had rebelled against their fathers; Jahangir had imprisoned and blinded and even thought of executing one of his sons; Shah Jahan was guilty of liquidating his brothers and nephews, and had also swerved from Akbar’s liberal religious policy; as aggressors, none of them, not even Akbar was much different from Aurangzeb.

Of course the religious intolerance being pointed to here is in comparison to Akbar’s “religious tolerance” – the latter’s included the banning of facial hair for Muslims, declaring it unlawful to believe in Angels, banning the slaughter of cows for Muslims, persecution of scholars and so on. Aurangzeb merely enabled Muslims to practice their religion freely. Any persecution of minorities that did take place was not general, but speciﬁc, nor was it religious in nature, but rather political in aim. There are many claims of Aurangzeb “oppressing the Sikhs and their Gurus” when history shows us that there were some Sikh communities who rebelled against Aurangzeb and so, as a ruler, he dealt with them as a ruler deals with his people, not as a Muslim seeking to oppress non-Muslims. Even the Wikipedia page on Aurangzeb states the well-known fact that just as he demolished some (maximum 80 in a country 20 times the size of the UK) temples, which served as political centres for rebellion, he also ﬁnanced the building of many temples and Gurdwaras which posed no threat to the Mughal rule.

And as for the harsh treatment of his father, brothers and sons – Shah Jahan wanted Aurangzeb’s elder brother, Dara Shikoh to be the next emperor even though Dara Shikoh was a terrible leader and someone who very much wanted to reinstate Akbar’s persecutory laws towards Muslims. Aurangzeb’s other brothers were less exciting – they simply wanted to be emperors. Aurangzeb was the only one who realised that power was a responsibility not an opportunity to exercise one’s desires, and so he was forced to battle his brothers and imprison his father who only wanted power for the sake of power, in a palace, with each and every one of his needs being seen to.

Aurangzeb, unlike many of his predecessors, viewed being a ruler as a sacred duty rather than something to enjoy. He therefore spent every waking moment striving to discharge his responsibilities, lest he be held culpable on the Day of Judgement for not having done so. Once, one of his well-intentioned advisers suggested that Aurangzeb should lighten his workload, but the Emperor would hear none of it.

He (the adviser) seems not to consider that, being born the son of a King, and placed on a throne, I was sent into the world by Providence to live and labour, not for myself, but for others; that it is my duty not to think of my own happiness except so far as it is inseparably connected with the happiness of my people. It is the repose and prosperity of my subjects that it behoves me to consult; nor are these to be sacriﬁced to anything besides the demands of justice, the maintenance of royal authority, and the security of the State.

This desire to serve God, something which was equally as manifest in his great, great, great grandfather Babur, the founder of the Mughal Empire, was apparent to all those around Him. The British Ambassador Norris reports that he used to see Aurangzeb, even during battle,

surrounded by greate numbers of Horse & vast numbers of people crowding to see Him […] he himselfe tho’ carryd openly saw nobody, having his eyes always afﬁxed upon a Booke he carryd in his hands & reading all ye way he went without ever divertinge to any other object.

This book was the Qur’ān. Aurangzeb had memorised it completely. And he would constantly recite it. Abdul Aziz, the chief of the Uzbegs who had rebelled against Aurangzeb, famously noted that even during their famous battle, Aurangzeb would calmly spread his prayer mat on the ﬁeld, kneeling down to say the evening prayers in the midst of the furore that was taking place around him. “To ﬁght with such a man,” he said, “is to court one’s own destruction.” In fact, the Qur’ān was his sole means of ﬁnance. Though he presided over the richest empire in the world at the time (Shah Jahan’s famous peacock throne made from pure gold is in today’s terms worth more than $804 million), he refused to take any money from the treasury. Instead, he would earn his living by producing handwritten copies of the Qur’ān, using the beautiful calligraphy he had mastered as a child.

“His vest did not cost above 8 Rupees, and his outer garments, less. Whatever Aurangzeb needed for his own use he always paid for, never accepting presents from others,” continued Norris.

Even the shroud he was buried in was bought using this same source of revenue. Towards the end of his life, having taken the Mughal Empire to the peak of its existence (henceforth it would plummet into its abolition in 1857) the Alamgir (“Conqueror of the World” – a title he adopted in ascending to the throne) would often recite:

In a twinkle, in a minute, in a breath,

The condition of the world changes.

In a ﬁnal letter to his sons, he said,

I brought nothing with me into this world and am carrying with me the fruits of my sins. I know not what punishment will fall on me […] Whatever the wind may be, I am launching my boat on the water.

And to his Vizier, Asad Khan, he wrote,

Praise be to God, that in whatever place and abode I have been, I have been passing through it, withdrawn my heart from all things connected with it, and made death easy for myself.

Aurangzeb, may God be pleased with him, passed away during the dawn prayers. Even as he lost consciousness, says Mustaid Khan,

the force of habit prevailed, and the ﬁngers of the dying King continued mechanically to tell the beads of the Tasbih they held.

And what was his funeral like? In accordance with his will: “Three hundred and ﬁve rupees, from the wages of copying the Qur’ān, are in my purse for personal expenses. Distribute them to the poor and needy on the day of my death […] do not spend it on my shroud and other necessitates.” He stated elsewhere that this was “in case I had made a mistake in copying the Qur’ān, as I will be answerable to that” “Bury this wanderer […] with his head bare, because every ruined sinner who is conducted bare headed before the Grand Emperor (God), is sure to be an object of mercy […]”

May God have mercy on you, Sultan Aurangzeb! He used you as a means of preserving His faith and His justice in the subcontinent, and as a result, I was able to be born into His faith. You are an example for all leaders to come, an inspiration for all those who believe in Him and a reminder for us all of the responsibilities we must discharge as believers in Him. May God forgive you and gift you with the companionship of your beloved Prophet (sall Allāhu ʿalayhi wa sallam) in the hereafter. 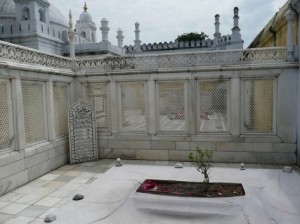 Originally, the grave of Sultan Aurangzeb only consisted of a wooden slab with an inscription in Farsi which said, “No marble sheets should shield me from the sky as I lie there one with the earth.” But it was later embellished and renovated with marble by the Nizam of Hyderabad.

[1] Nadwi, A. Saviours of the Islamic Spirit. India: Academy of Islamic Research.