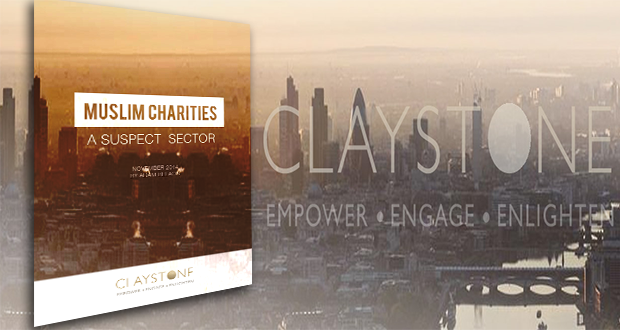 London-based think tank, Claystone, released a damning report yesterday exposing the Charity Commission’s apparent bias against Muslim charities. The 34-page report focuses on the period following the appointment of its current controversial right-wing chairman, William Shawcross, in 2012.[1] Shawcross used to be a trustee and director of the infamous Henry Jackson Society (HJS), a neoconservative think tank that has been accused many times of being Islamophobic and anti-Palestinian rights. [2][3][4][5]

Furthermore, shortly after Shawcross’ appointment the Commission initiated a new issue code called ‘extremism and radicalisation’, and has labelled at least 55 charities with this code so far without their knowledge. The report highlights that more disturbingly there are no written criteria for applying or removing this label and thus, like everything else to do with these absurd words ‘radical’ and ‘extremist’, it can be applied on anyone subjectively without a significant burden of proof.

This is a vestige from PREVENT, the government’s failed so-called counter-terrorism strategy, arguably designed to shift attention away from more rational yet inconvenient-to-highlight causes of terrorism to turning ordinary men, women and even children within the Muslim community into suspects.

PREVENT’s partner in the counter-terrorism industry

PREVENT enjoys its own fair share of academic refutations and reports, [6][7] but what the Claystone report confirms is that like the Health and Education sectors,[8] [9] the Charity Commission has indeed been recruited into the “cradle-to-grave police state” strategy, being a partner agency in the lofty aim of “no ungoverned space[s] in which extremism is allowed to flourish.”

Just like Shawcross’ fellow neoconservative and former HJS comrade, Michael Gove went on a noble quest to purge—sadly only predominantly Muslim—primary schools of ‘extremism’ and used every means in his power to scrutinise children’s beliefs; [10] [11] the Charity Commission seems to have followed suit. The report mentions that several Muslim-run charities expressed concerns at how their investigations were apparently indefinite, with no clear criteria stipulated concerning their monitoring by the Commission.

One trustee said “We were questioned at length about different religious clerics who in most cases had done nothing more than deliver one lecture at a fundraising event some time in the past for us. We were quoted snippets from lectures they had given at events that were nothing to do with us and asked to provide explanations.”

Another trustee commented “It felt like the assumption was we were apologists for extremists unless we could justify why we weren’t. If the commission felt that unlawful speech had been used they should have gone to the police with their quotes.”

The report also highlights the folly of the notion of ‘non-violent extremism’ and the absurdities built into its attempted definitions and usage. David Cameron surprised many of us when his task force came up with such a generalised definition of “extremism”, something that is supposed to be so dangerous, yet unfortunately anyone can be interpreted to fall into: opposition to so-called “British values”. [12]

Hence one charity trustee told the report’s authors that it “is possible to make a case that previous statements of the chairman [Shawcross] in support of Guantanamo bay, for instance, are a violation of fundamental British values and thus extremism.” As has been pointed out by many experts, this definition’s interpretations are often subjective and lead to brandishing religiosity as extremism.

The report takes to task the Commission for the “confused and contradictory” guidelines it has concerning ‘extremism’. They are to purge the charity sector of “extremism” yet they do not know what “extremism” actually is, and even more ludicrously someone from the Commission states that “the charity commission does not make determinations about whether an individual is deemed to hold extremist views.”

For example, on 17th January 2012 whilst still a director at the Henry Jackson Society, he stated that “Europe and Islam is one of the greatest, most terrifying problems of our future. I think all European countries have vastly, very quickly, growing Islamic populations…” [14]

Of course anyone is entitled to their opinions about Islam and Muslims, however if someone has an ideological hostility to Islam and Muslims then their suitability must be called into question for a role where they have the power to stifle the activities of countless Mosques and Islamic organisations.

[14] Dfwworld, 2012. William Shawcross Justice and the enemy: Nuremberg, 9/11, and the trial of Khalid Sheikh Mohammed. Available at: https://www.youtube.com/watch?v=S86lQzj6a8I