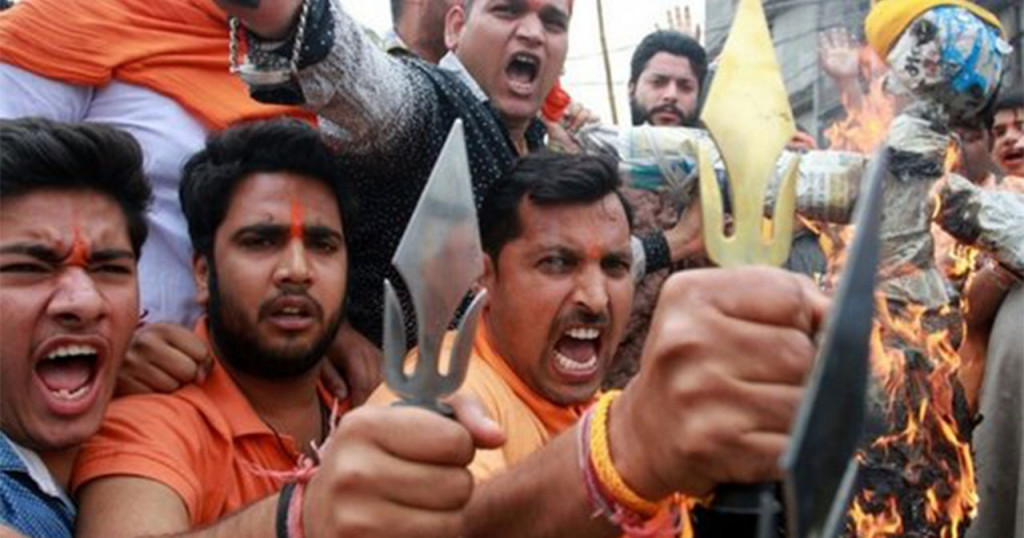 After several months of scrutiny, analysis, and review, the People’s Review of Prevent has now published its findings.

Whilst Prevent has been dealt a series of fatal blows, from its basis and operationalisation, to the culture it has fostered, disturbingly, Prevent is paraded abroad by the UK government before repressive  regimes. Indeed, the People’s Review of Prevent has found[1] that Prevent’s counter-extremism mechanics that undermine criticism of state actions “are transferred as part of an ‘export-oriented’ Prevent industry”.[2] Alongside, China,[3] India is another country the UK has disturbingly chosen to engage with on the topic of “extremism”.

A genocidal culture against Muslims

Three months ago, in December 2021, the leader of a group of Hindu religious leaders in India were recorded[4]addressing a gathering that included at least one member of the ruling Bharatiya Janata Party (BJP), currently led by Indian Prime Minister Narendra Modi.

The person is recorded as saying: “Even if just a hundred of us become soldiers and kill two million of them [Muslims in India], we will be victorious … If you stand with this attitude only then will you able to protect ‘sanatana dharma’ [an absolute form of Hinduism].”[5]

Another person is heard saying “Like Myanmar, the police, politicians, the army and every Hindu in India must pick up weapons and do this cleansing. There is no other option left.”[6]

Like other nationalist governments, the BJP rouses hard-line anti-Islamic sentiment through tacitly condoning violent right-wing organisations, or in some cases through an open affiliation.[7]

For India’s Modi, the Rashtriya Swayamsevak Sangh (RSS), a paramilitary organisation linked to the Hinduvta, provides the engine for his party’s anti-Islamic animus.

In this symbiotic arrangement, the BJP  provides a veneer of “democratic” respectability to hard-edged anti-Muslim hatred and calls for extermination.

Over ten years ago, WikiLeaks revealed that Rahul Ghandi, an Indian MP – remarked to US Ambassador Timothy Roemer that the RSS was a “bigger threat” to India than Laskhar-e-Tayiba, a proscribed organisation that operates against India in Pakistan.[8]

Modi’s support for the RSS is not-so clandestine and goes back several decades. In 1992, the RSS’s orchestrated burning of the Babri mosque, a 16th-century mosque in the town of Ayodhya, which set off religious riots in which 2000 people were killed, was linked to Modi.

The fire was preceded by a BJP tour of the area two years previously. At that time, a BJP leader paraded into Ayodhya in a Toyota decorated like a chariot, to rouse the local Hindu people. Modi was the show’s “logistics” man.

So, it is not surprising that Modi and other Hindu leaders kept silent[9] on the statements made late last year at the Hindu rally, despite the fact that such statements amount to “hate speech” and “incitement” as defined by the UN in its statements on genocide prevention.[10]

Hindu nationalists in India are exerting more influence on the public by using the notion of an “enemy within”, an “insurgency” or coming Islamic “hordes”. In this brutal but now obvious strategy, “counter-insurgency” or “counter-extremism” are interchangeable and mutually justifying terms.

This “clash of civilisations” ideology is required by nationalists to survive, but in yielding to it,  they conform to the definitions of “extremism” they claim to want to prevent.

India’s tyrannical right-wing nationalism raises key questions about the orientation of Britain’s own Conservative government to politically active Muslims, and the mechanics of its Prevent policy – because behind the niceties, startling parallels emerge.

Co-operation between UK and India on defence and security tech

More broadly, under the Conservative government, the UK has ignored strong UN pronouncements on India’s human rights abuses, and instead forged stronger security and defence links with India.

However, the Indian Army has been the subject of multiple allegations of extreme human rights abuse, especially related to its operations in Kashmir.

According to official figures, 17 people were killed by shotgun pellets between July 2016 and August 2017, and 6,221 people were injured by the metal pellets between 2016 and March 2017. Civil society organizations believe that many of them have been partially or completely blinded.[12]

The report also highlighted the  impunity created for the Indian army in the state of Jammu and Kashmir. This impunity is now broadly accepted by human rights lawyers as being enabled by the discriminatory and speculative legislative environment of the War on Terror, which allows abuses to be sold under the banners of “counter terrorism” and “counter-extremism”.

Today, this environment – as could have been reasonably predicted by savvy journalists at the time – has unfurled and extended to enable the Indian government to declare war on Muslims in India.

Nonetheless, in October last year, UK Foreign Secretary Liz Truss sailed into the bright and breezy bay of Mumbai on a UK warship, in the name of “developing security and defence tech” with India.

The Home Office stated that Truss’s visit “underlines the UK’s increasing defence, security and maritime co-operation with India and the wider region”. Washington also arrived at the party, adding US F35B fighter jets to a flyby of UK jets.

Data gathering and surveillance of protestors

What is remarkably clear in India – and should serve as a warning sign to all those concerned with justice in the UK – is how rapidly the War on Terror has become a war on general dissent against ethno-nationalism, racism, and anti-Islamic policy.

The Cold War-like tactics[14] of Prevent have employed the same lens –thanks to its revamped versions that have resulted after successive “reviews”. As the People’s Review of Prevent report documents in detail, Prevent “interviews” and “referrals” are collecting points for data on individuals, including from young children.

In December 2019, as protests against a controversial new citizenship law swept India, three incidents in different parts of the country revealed the state’s attempts at surveillance[15] of dissent. In Delhi, police officers used facial recognition devices to screen individuals entering a protest venue.

In what is becoming a common phenomenon in protests throughout the world, surveillance drones circle[16] above a protest marches, such as a recent march in Chennai, India. In Hyderabad, police stopped[17] a pedestrian and fingerprinted him to check for “past criminal activity”.

This stop-and-search approach to communities is familiar to Muslims, people of colour, environmental activists, aid workers and even lawyers in the UK.

It has been documented in policies such as Schedule 7 and Prevent, key data collecting points in Britain’s unfurling “counter-terrorism” and “counter extremism” architecture.

Silent complicity in the name of “counter terrorism”

Evidence shows that the ethno-nationalist government in New Delhi has leveraged the global clarion call of “counter terrorism” and its accompanying laws – such as the Unlawful Activities Prevention Act – to silence pushback against their violence against Muslims. They have done this by framing efforts to attain justice as part of an “insurgency”.

This framing of non-violent efforts to achieve justice for abuse, is telling in itself – but the orientation of New Delhi is made even clearer by the harassment and detention of lawyers and journalists, as concluded in Human Rights Watch’s World Report 2021[18], and what Amnesty International states is a “selective” application of the principle offreedom of expression.In a letter to the Indian government[19] on March 31, 2021, where they wrote of their concerns, five UN special rapporteurs highlighted the cases of three Kashmiri men held under “counter terrorism” laws – in particular, Waheed Para, a member of the Jammu and Kashmir Peoples Democratic Party, which administered Jammu and Kashmir in an alliance with the BJP until 2018:

“He was held in a dark underground cell at sub-zero temperatures, was deprived of sleep, kicked, slapped, beaten with rods, stripped naked and hung upside down. His ill-treatment was recorded. Para was examined by a government doctor three times since his arrest last November and three times by a psychiatrist. He requested medication for insomnia and anxiety,” the rapporteurs’ letter said.

That states are leveraging “counter terrorism” and “counter-extremism” – which aims to “identify” those who present “risks” to the state based on a warped pre-crime argument readily manipulated by tyrannical leaders – at the expense of human rights, is not new.

However, that “counter terrorism and “counter-extremism” are making countries more prone to tyranny and abuse is only recently being noticed more broadly.

Grassroots efforts in Britain, such as the People’s Review of Prevent,[20] to highlight the dangers of counter-extremism policy not just to Muslims, but to political dissenters and even to governance itself – through the threat it poses to the survival of the public sector in the UK –  are gathering support.

These should foster strong calls for legal enquiries into those who threaten social unity through “counter terrorism” and “counter extremism”. Furthermore, there is an urgent need to act on the conclusions of[21] the People’s Review of Prevent that, “practitioners caught up in Prevent, community groups, trades unions and professional associations, and civil society groups to demand that Prevent be withdrawn”, and the government withdraws its Prevent strategy “on the grounds that it is ineffective, disproportionate and discriminatory”.

Instead, many of those trumpeting “counter-extremism” in the UK, from within and outside the British government, have not only remained silent on India’s outright violence against Muslims, but have lent their support and even their “expertise” to the Modi government. This should raise the question: just who are the real “extremists” here?

When governments turn against people who speak up, under claims of “insurgency”

Two months prior to the Al Jazeera video in which members of India’s ruling party quietly applauded calls for the extermination and expulsion of Muslims from India, the British government released a press statement[22] in which Baroness Williams, the British Minister for Countering Extremism spoke about “Tackling Insurgent Ideologies”.

Her speech opened a three-day conference between London and New Delhi. Describing counter-extremism as “complex”, Baroness Williams without a sliver of irony, stated that India was “the largest democracy in the world”.

She underlined the importance of Britain and India’s “shared work to counter terrorism”, stating that the conference was “a great opportunity for us all to reflect on the challenges we are facing … share best practice, and establish how we can and must continue to work together”.

Britain’s co-operation with India is just another sign that it is time to consider “extremism” – that is substantively far worse than any Prevent definition of “extremism” – as a feature within Britain’s very own government; it is another example of the UK transporting Prevent around the globe.