The Remarkable Story of Islamic Turkey 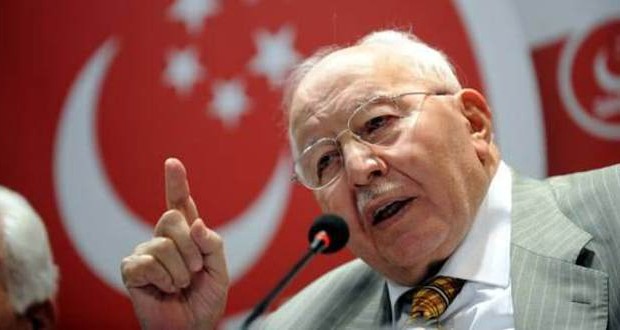 Dr Mohamed Soudan, Foreign Relations Secretary of Egypt’s democratically elected Freedom and Justice Party, led by President Mohammad Morsi, and one of five members of the Muslim Brotherhood’s Arbitration Committee that arbitrates between members of the MB at all levels of the organisation, discusses the remarkable story of Islamic Turkey. Follow this three-part series which explores the transitional era of Turkey, from the struggles of Professor Necmettin Erbakan in a staunchly secularised political climate through to President Erdogan and his path to excellence.

The recent momentous events in Turkey, and indeed those we witnessed in 2013 in Egypt, both similar in impetus and nature yet different in consequence, remind us of an imperative era in history. We are reminded of Turkey’s ‘transitional era’, the period in which it rid itself of the despotism of military rule and tyranny that suffocated it, ever since the downfall of the Ottoman Empire in 1924 and the ascension of Zionist-sponsored, secular Mustafa Kemal Atatürk to power.

The Islamic story of struggle was led by Professor Necmettin Erbakan soon after the fall of the Islamic Caliphate in 1924. This occurred when the then President Kemal Atatürk was using everything in his repository to distance the Turks from their Islamic identity under the pretext of catching up with Western ‘progressiveness’.

The Turks exhausted every means to defend their Islamic identity against the secular Atatürk-driven onslaught against their deep-rooted values. This occurred alongside successive arbitrary laws and procedures that sought to adopt Western dogmas to drive people away from the Islamic Shari’ah. Despite limited success in formally realising his secular ambition, it failed catastrophically to remove the effusive inner Islamic sentiment held by the resistant Turks.

The light of Islam began to radiate again at the hands of Necmettin Erbakan. He returned to Turkey on completion of a PhD in Mechanical Engineering at the world-renowned RWTH Aachen University in Germany.[1] Erbakan later received an MA and second PhD in Islamic Studies from King Saud University and began teaching at the University of Istanbul,[2] before becoming a prominent political activist and figure in the Justice Party (AP) which was, at the time, headed by Süleyman Demirel. Further to this, he was recognised for a number of significant industrial achievements in the sixties after assuming a variety of professional roles.

Erbakan never hid his Islamic tendencies, despite it being against the norm during this period and, as a result, incurred waves of criticism from his secular compatriots. When pressure mounted, Süleyman Demirel decided to remove Erbakan from his party’s nominee list, sensing the increasing influence of its religious members. A turning point was marked in the life of Erbakan when he chose to pursue his vision as an independent nominee to the historically religious city of Konya, one that forever maintained its Islamic identity.

The Turkish Military Memorandum Coup of 1971

Erbakan managed to secure a majority vote in Konya and so successfully entered the Turkish Parliament where he surrounded himself with fellow religious members. Upon doing so, he began forming his own party in 1970 which was called the National Order Party (MNP). The new party was gladly welcomed by Turks but was deemed a major threat to secular parties at the time. Unable to tolerate a challenge to Kemalism, the party was dissolved on the back of the March 1971 military Coup d’état by order of the Constitutional Court for allegedly opposing the ‘Secular Constitution’ of the state. Erbakan, however, never lost hope and after only 17 months, in October 1972, he established the National Salvation Party (MSP). Cleverly, Erbakan assigned his friend from the National Order Party, Süleyman Arif Emre, to lead it, seeing as it was challenging for Erbakan to be at its forefront again, particularly in the run-up to the Parliamentary Elections. At the elections, Erbakan’s National Salvation Party gained a huge 48 parliamentary seats, becoming Turkey’s third largest party. Süleyman Arif stepped down from his post to again make way for the party’s real leader and driving force, Necmettin Erbakan.

Significant disputes raged between the ruling party and its opposition in Parliament. The two were on diametrically opposite ends of the political spectrum, one to the far right and another to the far left; the Justice Party and the Republican People’s Party (CHP), respectively. To form a majority in the October 1973 elections, the CHP found no option but to merge with Erbakan’s National Salvation Party. Harnessing on this priceless opportunity to take hold of Turkey’s ministries, Erbakan entered a coalition with the CHP. By 1974, members of the Islamic MSP secured seven ministries in the Turkish Government including Interior, Justice and Business and Manufacture. Erbakan climbed further still until he was appointed as Deputy Prime Minster of Turkey, leading on huge industrial and economic reform, and establishing 70 new factories in just two years.

The National Salvation Party had become an integral part of the political landscape in Turkey. Realising this, it initiated an organised media-concerted campaign, revealing to Turks that the current system contravenes Islam’s requirement of managing both the state’s political and religious entities under its authority. Secularism and its ensuing system are principally against such a unity. Muslims who understand the universality of their faith and truly see through the secularised rhetoric, even when delivered by ‘men of religion’, recognise worldly and spiritual matters as being inseparable, including politics and people’s state of affairs. The One Who set out the Laws of Islam is He Who created man suited to follow these laws. The Islamic System is, moreover, one that is suited for all periods of time, representing both the religion and the state, with the Qur’an laying out the code of life, with its application achieving the purpose of man’s creation:

“I only created jinn and man to worship Me.”[3]

In the same period, the young Recep Tayyip Erdoğan began to shine. He was nourished under much religious tutorship and inspiration and quickly obtained the recognition of Necmettin Erbakan. Unfortunately, it was not long into this glimmer of hope that the then indoctrinated Turkish Military started to react. A festivity was organised by the MSP in Konya entitled ‘Liberating Jerusalem’ and was attended by approximately 100,000 Turks. Powerful Islamic slogans filled the air of the gathering, some of which called for the reestablishment of the Caliphate. Flustered and aggravated, the Turkish Military embarked on yet another Coup d’état, overthrowing the government in September 1980, and accusing Erbakan and his party of wanting to establish an Islamic State in Turkey, doing away with Secular and Kemalist principles.[4]

After three years of military rule, restrictions were again lifted from all political parties, allowing them to re-establish themselves. During this period, the Welfare Party (RP) was formed, led initially by Ali Türkmen, in August 1983. The resolute Necmettin Erbakan joined in 1987, climbing to its leadership in October of the same year. In the Parliamentary elections that followed in 1991, the Welfare Party obtained 62 parliamentary seats as well as 18% of all local votes (councils), thus securing six large cities, at the forefront of which was Istanbul. Erbakan’s shining and distinguished student, Erdoğan, was appointed as its Mayor in 1994, to lead the next era of Turkey’s Islamic reformation. More success followed for the Welfare Party. It extended its share of the electorate to 21% in the 1995 General Election, ahead of all other parties, and thus ensured its presence in any future government. The year 1996 saw the first Islamic figure, Erbakan, head the Turkish Government. This was made possible following a successful coalition between Erbakan’s Welfare Party and the True Path Party (DYP).

The Turkish Military Memorandum Coup of 1997 – the ‘White Coup’

Anxious and ever exacerbated, the Turkish military began sensing a threat against Atatürk’s secular state. As a pre-emptive defence, it applied prohibitive pressures on Erbakan’s government forcing it to adopt measures for the ‘maintenance of the state’s secular identity.’ These included prohibiting all calls for the application of the Shari’ah, banning the Hijab, closing down Qur’an schools, halting a new Masjid project in Istanbul’s Taqsim Square, a project formerly initiated by Erbakan, and it enforced the removal of select governors for their religiosity in addition to a further 160 army officers. Erbakan, finding himself helpless against these punitive measures, resigned in 1997 in what was called the ‘Postmodern Coup’, before the Welfare Party was banned altogether in 1998. Erbakan was summoned to a Military Court and faced many spurious allegations, most significantly: ‘going against the state’s secularism or failing to separate religion from state.’ Erbakan was banned from engaging in any political activity for five whole years.

The Constitutional Court’s decision to dissolve the party came as no surprise. In fact, Erbakan had already planned to swiftly replace his party on its dissolution. The moment Erbakan was banned from political involvement, his students established the Virtue Party, with Recai Kutan elected as its head in 1998. The party participated in the Parliamentary Elections of 1999 securing an impressive 115 seats. Kutan attained another majority at the third Party Congress to continue his premiership, marginally ahead of young Abdullah Gül. Sadly, the Turkish secular mouthpiece began mounting pressures against Islamically oriented members. Meanwhile, the Turkish military continued imposing restrictions on Erbakan. In 2000 he was sentenced to a year in jail by the Court of Cassation for allegedly ‘stirring up religious and ethnic hate’, banning him from any political activity for life. The Turkish Constitutional Court later dissolved the Welfare Party in 2001, purporting, once again, that it threatened the ‘secular identity’ of the state.

Erbakan’s Islamic Reformation until the End

Still resolved on participation, relentlessly striving to revolutionise Turkey and defiant against the unending challenges, Turkey’s religious youth reorganised their efforts and revisited their aspirations; they established the Justice and Development Party (AKP) in 2001. At the same time, religious elders established another political party, the Felicity Party which was headed by Mustafa Kamalak. The Felicity Party was founded upon the same Erbakanist principles that existed in the four parties that preceded it. The Parliamentary Elections followed in 2002. the Justice and Development Party, with its co-founder Abdullah Gül becoming Prime Minister after having secured a huge 363 seats. The Felicity Party did not succeed in entering the parliament having gained less than 10% of the vote, although Erbakan acceded to its leadership in 2003, only to be put under house arrest in 2007. The judgment was issued against him by the Supreme Court in Ankara on the charges of dispelling a million dollars from allowances granted by the State for parliamentary parties when he was the leader of the Welfare Party. But due to Erbakan’s deteriorating health, its application was delayed four times. Until in 2008, Erbakan’s student, now President Abdullah Gül managed to grant his teacher amnesty, allowing Erbakan to return to the political scene, to be elected again as head of the Felicity Party. Erbakan remained in this post until he returned to Allah in March 2011, may Allah shower him with mercy and allow Turkey’s material successes and Islamic revolution to pour in his scales on the Day of Judgement, as the starting force behind Turkey’s.

Hundreds of thousands of Turks followed the funeral of this great leader, and founder of all Islamic political movements in contemporary Turkey. At the forefront of the Istanbul funeral was the then Prime Minister Erdoğan, President Gül, senior army officers and representatives from more than 60 countries.

In part 2 we follow Recep Tayyip Erdoğan and his path to excellence.

[1] One Islam, Many Muslim Worlds: Spirituality, Identity, and Resistance across Islamic Lands by Raymond William Baker, 2015.