#STAND4UYGHURS
Home / Featured / We drowned first. Then he did. 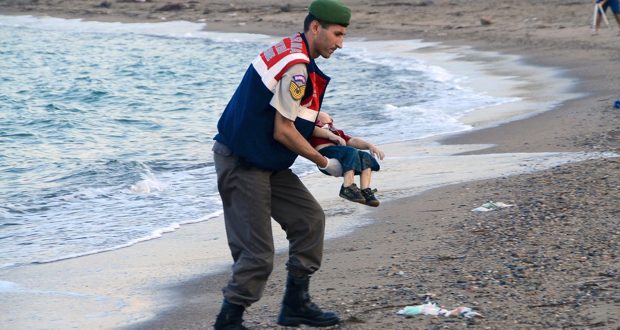 We drowned first. Then he did.

For the past few months, heart-wrenching images have been reaching us in succession. Images of corpses which the waves of the sea had carried to the shores of land after their attempts to escape the barrel bombs of Bashar and the savagery of his men, failed in the middle of the ocean. We would not have known this had the shores of Libya, Turkey, Greece and other countries not complained to us.

The last of these images was one that shocked the world. A child who had not reached the age of one lying face down on the shores of Turkey after the boat which he and his family were in capsized. He however is just one of 3,000 who met the exact same fate in the Mediterranean just this year.

After seeing such an image, one is naturally compelled to relive those harrowing final moments of loneliness and fear as his mother bade farewell to her child on sea. One finds himself wondering:

“How must she have felt?”

“Did she suffocate first?”

“Or did she see her child die before her?”

Only a few moments into this thought and you are entirely lost in emotion and tears begin to hemorrhage uncontrollably. As you continue to contemplate however, tears cease and sorrow is gradually replaced with frustration and powerlessness. It is at this point that the blaming begins.

Whether it is the Muslim governments who have remained silent, the sluggishness of the UN in intervening, the double-standards of the West or anything else, we will raise the fingers of blame upon seeing such images, and many a times, very rightly as well.

The Qur’anic approach however, is starkly different. Whilst every party which was identified above may in fact be blameworthy and answerable, in the face of every calamity, the Qur’ān turns our attention to something altogether different, a matter which is most certainly not a cliché of a topic but the root cause behind every tribulation as identified by the Creator Himself.

Also read: How I saw the Seashore Child

Read the following āyāt which speak of the afflictions that befall the Muslims and please take note of the recurring theme every single time.

“We sent messengers to many nations before you and We seized them with extreme poverty and loss in health so that they might turn to us in repentance.” [1]

“And We had gripped them with suffering as a warning, but they did not surrender to their Lord, nor did they humbly supplicate.” [2]

“And whatever affliction befalls you, it is because of what your hands have earned.” [3]

“Do they not see that they are put in trial once or twice every year yet they do not turn in repentance, nor do they learn a lesson from it?” [4]

“Corruption has appeared in the land and the sea because of what the hands of men have done, that He may make them taste a part of that which they have done, so that they may turn in repentance.” [6]

“And We destroyed the towns which are around you, and We have shown them the signs in various ways so that they might turn in repentance.” [8]

“And there was not a sign which We showed them except that it was greater than the sign before it! And We seized them with affliction so that perhaps they might turn in repentance.” [9]

After identifying the illnesses, Allāh prescribes the exact same cure.

Allāh wants us to repent.

The customers of Shisha lounges are laden with Muslims, the shortfalls towards the five daily prayers, the addiction to pornography and private messaging between strangers of the opposite sex is at an all-time high, the Hijāb—as prescribed by the Prophet (sallAllāhu ‘alayhi wasallam) and practiced by the female companions—is rapidly deteriorating and the justifications which free one’s self from guilt are unprecedented. Those who actively enjoin good and forbid evil are few whilst those who do are labelled as patronising, self-righteous and intrusive to one’s “freedom”.

Not for one moment are my words an attempt to carry out the capital punishment upon our beloved Ummah but an attempt to raise awareness that my sins and yours actively devastate the wellbeing of the Muslims across the board for little do we realise that we had drowned many years before the children of Syria.

Ponder over the situation of the Prophet (sallAllāhu ‘alayhi wasallam) the night before the battle of Badr, for can there be a calamity worse than unexpected war?

“There was not a single horseman amidst the Muslim camp with the exception of Miqdād. I can recall how we were the night before battle, every single one of us was fast asleep with the exception of the Prophet (sallAllāhu ‘alayhi wasallam). He was sitting under a tree, praying and weeping until the morning of battle.” [10]

This is precisely what Allāh wants to see from His slaves in the face of every trauma. Tears, sacrifice, serious self-accountability and change. Whilst worldly preparations are incumbent en-route to the dealing with our plight as Muslims, Allah subhānahu wa ta’ālā has told us where these preparations are to begin and how they must end: with worldwide repentance and genuine turning to Allāh once and for all.

“What habits must I drop?”

“What habits must I acquire?”

“What relationships must I sever?”

“What relationships must I make?”

“How do I protect myself from being mediocre Muslim?”

“What will the project which I present to Allāh on the Day of Standing be?”

His body did not drown only after we’d allowed worldly preoccupations to drown us. Water did not fill his young lungs only after we’d filled our ears, eyes and hearts with that which displeases Allah. So what is the way forward?

“Then why, when Our punishment came to them, did they not humble themselves?” [11]

O Allāh, pardon me and the readers, and make our repentance a contribution to the rescuing of the Muslims.

Some actions points to consider:

1. Email your MP sharing your disappointment over the UK Government’s handling of the Refugee Crisis via the campaign set up by 38 Degrees here

Previous: How I saw the Seashore Child
Next: Netanyahu slips through UK border Control