How I saw the Seashore Child 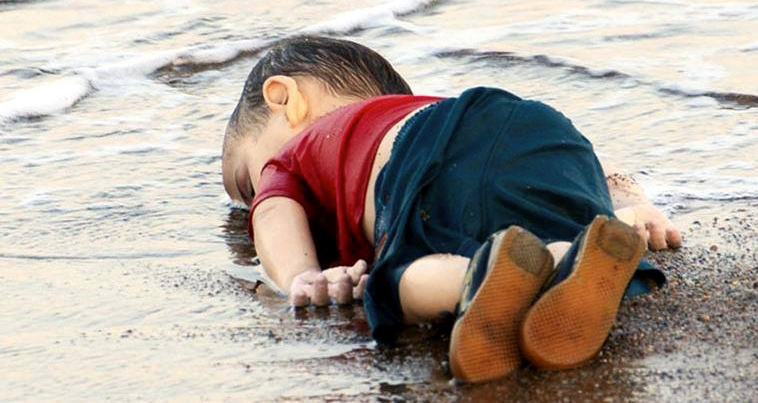 How I saw the Seashore Child

When you saw that Syrian child, an innocent, precious gem, thrown on its face on the shores of Turkey, what did you think? Did you see the child of an unfortunate ‘migrant’, who had stumbled into the sea on-par a voyage to a ‘better’, ‘more’ comfortable life in the European utopian continent of bliss, prosperity, acclaimed Human Rights and morality? Or did you see the child of the frantic refugee, fleeing for his life, turning East and West to no avail, to hit the ravaging, cold sea, towards somewhere northern, away from the brutality of a despotic regime that is supported by the very continent he intends in search of something beneath the calamity of death that haunts him from every side?

Today, our address is to you and not your government. Do not think, even for a split second that the luscious foliage, the tranquil parks and soothing waves, calmly brushing under the picturesque landscapes are the fruit of your labour, or a divine benefit out of heavenly love, not leant to others, but sought by all corners of the grieving earth. Not even for a second. For this Syrian child flees a reflection of Paradise onto earth, the centre of historic civilisation, the most resembling realm of God’s paradise through which a river from paradise flows and the perfume of its fruit ripples in the air. This individual does not flee Syria, he flees a dire situation that has compounded out of the savage world’s animalistic crave for what he has and they never had. This young boy voyages away from a land that we will all voyage towards at the end of times, a safe-haven when seas rupture in flames, mountains are levelled and the sun and moon crash together and when man will say “Where (is the refuge) to flee?”[1]

This young boy was swept onto the coasts of Turkey, laying on his face, to join the thousands meeting their fate, after escaping it in Syria. Not for a second did he prefer the offerings of Europe, or its charity for he stems from Syria, and he flees to one of the 59 countries[3], including the UK, tearing his own into shreds, sharing an airspace with a brutal regime, and giving the ‘green light’ to the pioneers of barrel-bombs, chlorine[4] and Sarin gas, before his desperate voyage, claiming the life of around 1,500[5] of his young friends in a single gas attack. Never were the Syrians going to embark on this nightmare had it not been for their fuelled calamity, how can we find it within us to call them migrants if before this impasse Europe was never really on the radar of their ambitions, but with more than one in a hundred of the population murdered,[6] the thin prospect of escape remains.

Never was the delight of this world intended to last forever anyway. And for those of us who think, we see that we own nothing but the food that we eat, less that expelled, the clothes that we wear, lest those thrown away and the homes we occupy, lest the room we never fill. Whether we answer our religious and moral duty of giving these heroes who seek refuge, sanctuary and dispensing to them some of our wealth after our we and our own governments failed them and competed in booting them away, offering sanctuary to 1.7% of the 3.8 million removed[7] a day will come when we will seek retreat and be ready to forgo everything for it:

“Though they shall be made to see one another, the criminal would desire to ransom himself from the punishment of that Day by his children, and his wife and his brother, and his kindred who sheltered him, and all that are in the earth, so that it might save him.”[8]

A day will come when we would not only surrender the ‘black Gold’ oozing boundlessly beneath our feet, and turning the fortune of the shepherds decreed to be born on dry sand dunes but we will beg that the entire earth were gold that we had ransomed for our safety.[9] People’s competition for oil is now to ignite furnaces, and drive vehicles and machinery, alas had it only been used to extinguish the fire of Hell, when not a single Syrian refugee has found asylum in the oil-rich gulf.6 It is a heart-rending situation and puts the huge weight of responsibility on the shoulders of the layman. But whatever went through your mind on seeing the young Syrian, washed by the tranquil tides, your duty is equivalent to your own capability, and this cannot be dictated as no one, but God, then your own self is more aware of what you are capable of.

Also read: We drowned first. Then he did

As we tussle for more and more ‘desires’ that are never fulfilled, lock ourselves in a predicament of a ‘nine-to-five’, to end the day with Coronation Street, the Great British Bakeoff and filter coffee to stay alert, a Syrian family heads to Paradise as martyrs, another patiently bears the brunt of a ruthless regime, and a third anticipates a Syria to which we will all wish to find refuge in:

The Prophet sallAllāhu ‘alayhi wasallam says: “There will be a migration (Hijrah) after a migration, so the best people on earth are those who keep to the (land of the) Hijrah of Ibrāhīm (al-Shām [Syria]).”[10]

May Allah shower the people of Syria with mercy, admit them into his highest abode and hasten their victory and transform their situation into peace and bliss, and such for all of the refugees in the seas and shores of the world. May Allah open up our conscience and allow us to fulfil our brotherly obligation towards them. Āmīn.

Some actions points to consider;

1. Email your MP sharing your disappointment over the UK Government’s handling of the Refugee Crisis via the campaign set up by 38 Degrees here