What do Ayaan Hirsi Ali and ISIS have in common? 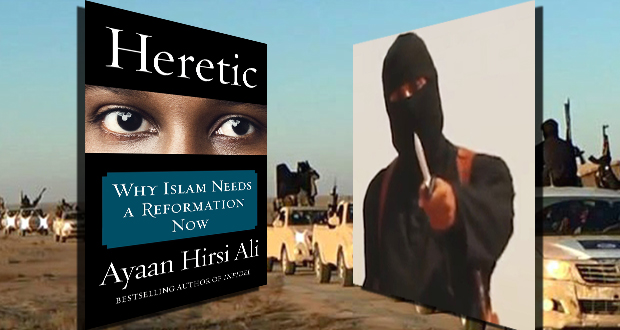 What do Ayaan Hirsi Ali and ISIS have in common?

Controversial anti-Islām activist and ideologue Ayaan Hirsi Ali has recently been given generous airtime once again promoting her new book, Heretic: Why Islām Needs a Reformation Now. In this episode she outlines five areas in which she believes Islām is in urgent need of reform: the status of the Qur’ān; the infallibility of the Prophet Muhammad (sall Allāhu ‘alayhi wa sallam); the emphasis of the hereafter over the ‘here-and-now’; jihād—which she tellingly refers to by the historically Christian term, ‘holy war’; and what she calls ‘Sharia law’.

Like other proponents of the discredited Conveyor-Belt theory and the neoconservatives’ apocalyptic Clash of Civilisations thesis, her statements are predicated on the widely propagated fairy-tale that Muslims are violent not because of the plethora of social, economic and political circumstances they find themselves in, which those who bear the burden of empirical research and study frequently state [1]; but rather quite simply because of their religion. This same myth that has been used to justify sustained colonisation and subjugation of the native cultures of several continents throughout the centuries [2], is also being used to conveniently divert blame away from those who support brutal dictatorships, the theft of natural resources and illegal wars today. And writing books in support of it is a very lucrative business.

As for Hirsi Ali, there are many problems that have become apparent that may explain her passionate vitriol against Islām and Muslims. I am not interested in her personal integrity following her history of fraud which expelled her from politics in Holland [3]; nor her interesting manufacture of statistics to attempt to dehumanise Muslims, simultaneously justifying war and aggression against them [4]. However, I am interested in a striking similarity I could not help but notice, between her and her ex-Muslim/anti-Islām entourage which continually seek to radically reform Islām on one hand, and the ‘terrorist’ groups that they claim to hate so much on the other.

One of the most common methodological errors of almost all heterodox, un-Islamic or anti-Islamic individuals and movements throughout history, is that they bring their personal beliefs and biases to the religious scripture, and then seek to justify—post facto—these views using cherry-picked religious texts (nusūs) that may support them linguistically. In fact, if one analyses the small group of supporters of Hirsi Ali who have gained notoriety for being ‘reformed Islamists’ or ‘ex-extremists’, one invariably finds this mind-set quite rife in their polemics both pre- and post-‘enlightenment’. Crucially, this mind-set led them to giving epistemic credence to any interpretation as long as it was linguistically possible from the text—even if it means ignoring the principles of exegesis or even common sense itself. In other words, any interpretation or opinion, no matter how unintended by the source of scripture, for them had an intrinsic legitimacy as long as it could be supported linguistically by scriptural evidences.

This methodological problem is exacerbated by minds that are prone towards fanaticism, that are unable to think sincerely about views they disagree with, and thus entertain other worldviews and paradigms, let alone recognise mistakes in their own methodology. As a result, many of the reformed fanatics who wish to purge the world of the likes of ISIS, rather than recognising the nuance and subtlety of Islamic texts and the legislative framework they come with, or recognising the fault in their own simplistic interpretive methodologies, feel there must be something wrong within the text or tradition itself that needs reforming. Scholar of Religious Studies Reza Aslan remarks at the shocking ‘lack of sophistication’ in this methodology,

“…they will scour a scripture for bits of savagery as though that is considered “research,” and then make these grand pronouncements about the lived experience of billions of people of faith. And then, when confronted with the fact that these scriptures can be interpreted in a multiplicity of ways, they will often make an argument somewhat akin to, Yes, but those who read these scriptures in a “figurative” or “metaphorical” way, they’re not the real Christians, they’re not the real Jews or the real Muslims. The great irony is that a lot of these New Atheists, memes when it comes to religion, they tend to read the scripture more literally than most religious literalists do.” [5]

Contrary to the impression given by many of the aspiring reformers that are given most of the oxygen of publicity, the post-enlightenment Christian approaches to scriptural hermeneutics do not apply to Islamic texts. This is partly because the Islamic texts were accompanied by a clear and concise methodological framework for not only identifying the intended meaning of the texts, but also an unimpeachable legal framework for the implementation of injunctions in real life, taking into consideration the concomitant benefits (masālih) and harms (mafāsid).

One thing that has defined the main body of Muslims upon the methodology of the Prophet (sall Allāhu ‘alayhi wa sallam) and his noble companions, from almost all other splinters and schisms throughout the ages, is that they first look towards the entire body of religious texts (nusūs), and then conclude a particular belief or practice (or a limited number of interpretations or opinions therefrom).

Without going into the details of the steps involved, it is clear that this methodology is capable of mitigating the dangers of the likes of Hirsi Ali et al. and ISIS, since it reduces greatly the opportunity for an individual to justify their desires using scripture. It also reduces the impact of potential human error on the part of individual exegetes. The Islamic texts were, after all, revealed in order to reform human beings, not to be reformed by human beings. This is the guidance that literally changed the world, civilising human beings and bringing them the bounties of this world and more importantly the hereafter:

[Allāh] said, “Descend from Paradise – all, [your descendants] being enemies to one another. And if there should come to you guidance from Me – then whoever follows My guidance will neither go astray [in the world] nor suffer [in the Hereafter].

And whoever turns away from My remembrance – indeed, he will have a depressed life, and We will gather him on the Day of Resurrection blind.” [6]

Any policy, which truly cares about people not falling into so-called ‘extremes’, should therefore desire to spread the prophetic methodology—the only real vanguard against the violent heresy and unrestricted barbarism of ISIS—instead of promoting anti-Islām fanatics that promulgate the deeply flawed and sadly shared underlying methodology. It is an unfortunate but revealing fact that those who make the most lucrative livings out of the paralysing terror of ISIS rather seek to criminalise those proponents of the prophetic methodology, silencing the only credible voices against ISIS and further stoking the flames of Islamophobia and war.