The Throes of Death 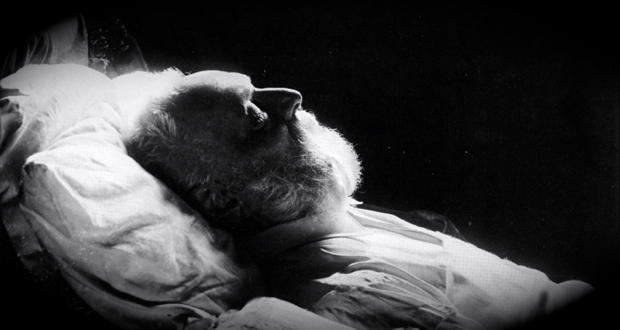 The Throes of Death

“The throes of death will come in truth, this is what you were trying to escape…”[1]

This āyah tells us that all will experience the throes and pangs of death, and for the sinner and disbeliever they will be exceptionally painful,

If you could only see the wicked in their death agonies, as the angels stretch out their hands to them saying: Let out your souls, today you will be repaid with a humiliating punishment for saying false things about Allāh and for arrogantly rejecting His signs.[2]

The time of death is very severe, a person is in pain and apprehensive of what is to come. Allāh, Himself, refers to death as a calamity:

The calamity of death struck you.[3]

The Messenger of Allāh (sallAllāhu ‘alayhi wasallam) said, “Do not long for death because the terror that follows death is immense. It is a sign of blessing to live a long life so that a person is given the opportunity by Allāh to repent.”[4]

and said, “Allāh, forgive me, have mercy on me, and let me join the highest company.”[5] He would supplicate,

Then he held up his hand and started saying, “With the heavenly host…” until he passed away and his hand dropped.[7]

His wife, ‘Āʾishah said, “Allāh’s Messenger (sallAllāhu ‘alayhi wasallam) died on my chest. Having seen him in the throes of death, I will never consider a severe death bad for anyone.”[8]

The throes of death are a final means of expiation for sins committed, or having our ranks raised and it is for this reason that many of the righteous considered them to be a blessing in disguise. ʿUmar b. ʿAbdu’l-ʿAzīz said, ‘I would not like the agonies of death to be reduced for me, for that is the last thing by means of which sin may be expiated for the believer.’

ʿAbdullāh b. Masʿūd said, ‘I went to see the Prophet (sallAllāhu ‘alayhi wasallam) (during his death sickness) and found him suffering from intense pain. I put my hand on him and said, ‘Messenger of Allāh, what pain!’ He said, “Yes, I suffer twice as much as anyone else would.” I asked, ‘Will you get double the reward?’ He replied, “Yes.” Then he said to me, “Allāh will remove sins, just as a tree sheds its leaves, for any Muslim who is afflicted with sickness or any other tribulation.”[9]

However, many scholars point out that at the last instants of death, when the believer receives glad-tidings of what is to come, and wants to meet his Lord, the pain of death pales into insignificance until it gets to the point that he does not feel anything at all.[10]

No one is saved from this hardship except for the martyr. Allāh’s Messenger (sallAllāhu ‘alayhi wasallam) said, “The martyr does not feel anything more when he is killed than one of you feels if he is pinched.”[11]

Signs of a good end

There are numerous ḥadīth which mention signs which indicate a good end. One must bear in mind, when reading them, that these signs are not definitive proofs, they are just indicators:

Signs of a bad end

Saffārīnī said, ‘Some of the scholars said that the things that lead to a bad end are four: being lazy in ṣalāh, drinking alcohol, disobeying and being rude to parents, and harming Muslims.’[35]

Those around the deceased must avoid falling into innovation, rather they should adhere firmly to the Sunnah at all times. A stark example of this lies with Saʿīd b. al-Musayyab while on his death bed. In his presence was Abū Salamah, and during his illness, Saʿīd fainted. Abū Salamah ordered that his bed be moved so he was facing the Qiblah and when Saʿīd regained consciousness, he asked Abū Salamah if his bed had been moved. He confirmed this and Saʿīd ordered that his bed be moved back to where it was.[36]

What to do when the person has died

When the soul is taken, the eyes follow it.[37]

When you are in presence of the deceased, close the eyes because the eyes follow the soul (as it leaves) and say good things because the angels say āmīn to what the family are saying.[38]

When Allāh’s Messenger (sallAllāhu ‘alayhi wasallam) passed away, his entire body was covered with a piece of cloth.[39]

But this is not the case for someone who has died in the state of iḥrām. A man was riding his animal on the Day of ʿArafah and it threw him off, killing him. The Prophet (sallAllāhu ‘alayhi wasallam) said,

Wash him with water and lotus, and shroud him in his two garments. Do not embalm him or perfume him, and do not cover his head and face because he will raised on the Day of Rising saying the talbiya.[40]

Hasten the funeral. If it is for a good person, you are hurrying it to good. If it was not, it is evil that you are dropping from your necks.[41]

From the deceased wealth. If it is not enough, his relatives are strongly encouraged to pay it off on his behalf.

Saʿd b. Aṭwal’s brother passed away. He had debt of 300 dirhams and he had children. Saʿd wanted to give his brothers wealth to his children, but Allāh’s Messenger (sallAllāhu ‘alayhi wasallam) said,

Your brother is being held back because of his debt. Go and pay it off for him.[42]

This man who has died is held back from entering Paradise because of a debt. If you want, ransom him; otherwise surrender him to Allāh’s punishment!

The family then rushed to pay off his debt until none was left.[43]

Whoever dies owing a debt, it will be taken from his good deeds on the Day where there is no dīnār or dirham then.[44]

Another narration in Ṭabarānī shows that this only applies to a person who did not intend to pay back the debt.

Breaking the bone of a deceased is like breaking it while he is alive.[45]

The eyes shed tears, the heart feels sad, but we will only say things that please our Lord. We are saddened at your passing, O Ibrāhīm.[46]

Two of the people’s practices are disbelief: dishonouring the ties of kinship, and wailing over the dead.[47]

The one who is wailed over will be punished on the Day of Rising because of that wailing.[48]

This applies for the one who wanted it done for him

He is not of us who strikes his face, rips his clothes and makes the call of Jāhiliyyah.[49]

Announcing is allowed to let people know of a person’s death and the time of his janāzah, but not if done by way of discontentment with Allāh’s decree, or going door to door, and so on.[50] It is in this latter respect that Allāh’s Messenger (sallAllāhu ‘alayhi wasallam) prohibited announcing death.[51]

When al-Najāshī died, Allāh’s Messenger (sallAllāhu ‘alayhi wasallam) announced his death and prayed the janāzah prayer over him.[52]

Whoever consoles his brother during an affliction, Allāh will clothe him with a green garments.[53]

When Allāh’s Messenger (sallAllāhu ‘alayhi wasallam) learned of Jaʿfar’s demise, he encouraged those around them to cook for them because they were engrossed with the death.[54]

[14] “Any Muslim who dies on the day or night of Jumuʿah is protected by Allāh from the tribulation of the grave.” [Tirmidhī from ʿAbdullāh b. ʿAmr]

[15] “A martyr is given seven favours by Allāh: he is forgiven with the first gush of blood, shown his place in Paradise, protected from the torment of the grave, saved from the Great Fear, adorned with the adornments of faith, married to the women of Paradise, and allowed to intercede for seventy relatives.” [Tirmidhī from al-Miqdād]

[16] “Standing guard (on the frontier) for one day and night is better than fasting the days and praying the nights of an entire month. If such a person dies, his good deeds that he used to do continue to accumulate for him; he is provided with his provisions (from Paradise) and he is saved from the interrogator (of the grave).” [Muslim from Salmān]

[17] “Dying from plague is a martyrdom for every Muslim.” [Bukhārī from Mālik b. Anas]

[18] “The one killed by abdominal illness will not be punished in the grave.” [Nasāʾī from ʿAbdullāh b. Yasār]

[20] “The one who dies under a collapsed building is a martyr.” [Bukhārī from Abū Hurayrah]

[21] “The woman who is killed by the child in her womb is a martyr, it will drag her by its umbilical cord into Paradise.” [Aḥmad from ʿUbādah]

[25] “Whoever fights someone who is trying to take his property without due right and is killed as a result is a martyr.” [Muslim from ʿAbdullāh b. ʿAmr]

[28] “The chief of the martyrs is Ḥamza, as well as a man who stands before an unjust ruler, enjoining the good and forbidding the evil, and is killed as a result.” [Ḥākim from Jābir b. ʿAbdullāh. cf. Albānī, al-Ṣaḥīḥah #374]

[30] “Whoever dies while doing something, Allāh resurrects him doing it.” [Aḥmad from Jābir]

[32] “Three people will be prohibited from entering Paradise: one who is addicted to alcohol, one who ill-treats his parents, and one who has no ghayrah and permits evil in his family.” [Aḥmad #5372. cf. Albānī, Ṣaḥīḥ al-Jāmiʿ #3052]